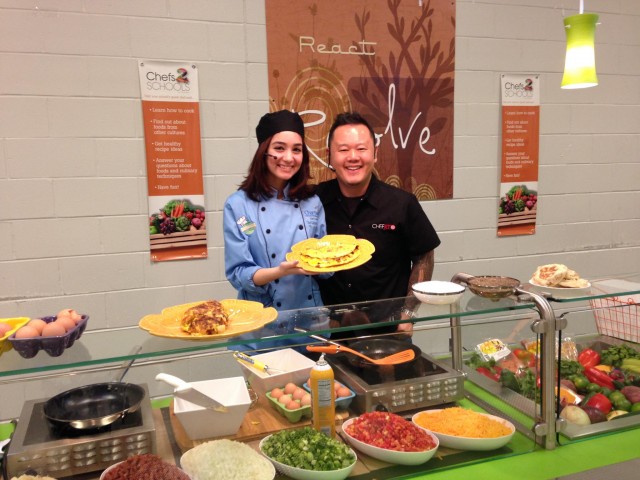 Union City High School’s Gabriela Martinez’s “Omelet de Union City” earned her a visit from celebrity chef Jet Tila, who cooked the winning recipe with her in the school’s cafeteria earlier this month.

The tenth grader recently won the “What’s Your Hometown Specialty?” contest, which was established in an effort to promote healthier meal options and educate students about nutrition. Chartwells School Dining Services partnered with Chef Jet Tila to host the contest, which encouraged students to film a five-minute segment of them cooking their favorite hometown meal.

Tila, who has appeared on Iron Chef and Cutthroat Kitchen, among many others, is currently working with The Compass Group (Chartwells’ parent company) to open a “fast-casual Pan-Asian concept” in school cafeterias around the country.

Editorial Intern: Sabrina Szteinbaum is a sophomore at Rutgers University majoring in Journalism & Media Studies, but those are just the basics! She is a Jersey-born, city-loving foodie who can be found running around New York City in search of the best cupcake, cookie, or piece of cake to feature on her baking blog. Sabrina has been baking since age 12, and has been documenting her confections at The Sugarcoated Life since August 2012. At Rutgers, Sabrina works as a correspondent for The Daily Targum. Her love of journalism has landed her the roles of newscaster and assistant news director on WRSU, one of Rutgers’ radio stations.