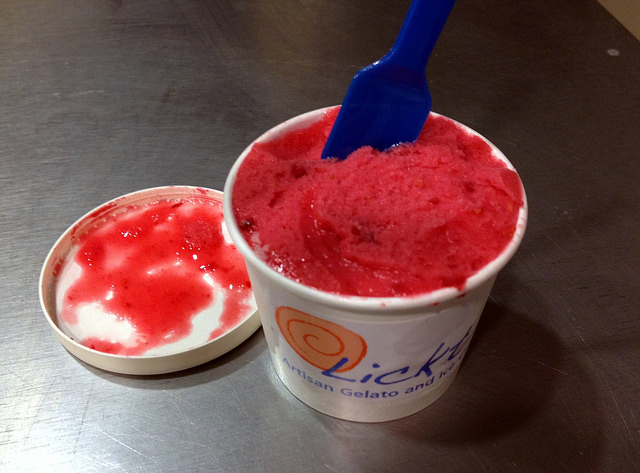 For anyone who’s been to Italy, the mention of gelato brings to mind a luscious frozen treat where quality is stressed over quantity. That is exactly the mantra behind Lickt Gelato, created by Margaret Asselin. Margaret had experience making gelato for friends and family, and in 2011 she decided to leave the corporate world and create Lickt Gelato. She saw Lickt Gelato as the chance to work for herself while also setting an important example for her teenage daughter. Lickt Gelato is based out of a factory in Kenilworth.

One of the reasons Asselin chose to focus on gelato is because of the health benefits, as gelato doesn’t require as much sugar and fat as ice cream. She makes an effort to use seasonal ingredients and will change up the flavors with the season. The company’s most popular flavors include salted caramel, chocolate sea salt, fresh mint Oreo, and spicy chocolate. Asselin has also done some unique flavors by request, everything from piña colada to goat cheese blood orange to agave cinnamon.

Lickt Gelato is currently being sold at The Meat House in Summit and Fairchilds in Roseland. The company also works with caterers for events and offers its product at some local restaurants. In addition, Lickt products can be found at farmers markets and other local events. Asselin’s goal for this year is to build the distribution and work on getting more restaurants to carry their product. Lickt’s current distribution is largely the result of word of mouth. The product is so good that if customers taste it at an event, they’re willing to seek it out. People respond not only to the quality of the product, but also the fact that it’s local and made in small batches, ensuring freshness.

Asselin spends her days looking for new flavor inspiration, with cocktail menus and cooking magazines serving as two of her favorite sources. There is a constant balancing act when it comes to a new flavor—it may taste wonderful, but will it appeal to enough customers? The challenges of Lickt Gelato are such that no day is the same, but to Asselin, that’s part of the fun.