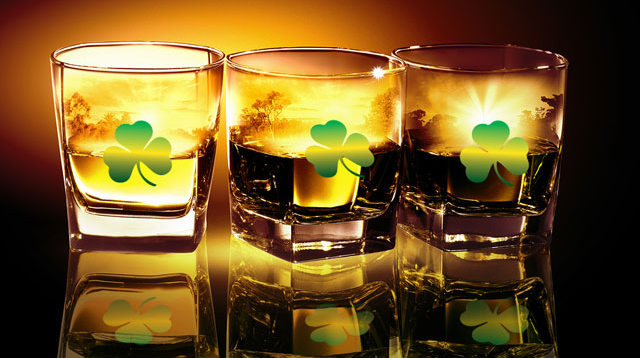 Everything you know about Saint Patrick’s day is a lie. We all know Saint Patrick was an Irish guy who rid Ireland of snakes, right? Turns out, Saint Pat wasn’t even Irish. He was born in Britain. OK, so the snake thing has to be true because to this day, there aren’t any in Ireland. The truth is, there never were any snakes in Ireland. Ever. At least we know it’s an Irish holiday, right? Not quite. Irish Americans took a minor holiday and brought it to a whole new level. Hey, it’s what we do best. We won’t even mention corned beef and cabbage!

There is one thing we are sure of, though.  The Irish make great whiskey.

You’ll probably never get the Scots to admit it, but they may have learned how to distill spirits from the Irish way back in the seventh century. What sets Irish whiskey apart from other styles of whiskey is the fact that it is pot stilled. The term “pot stilled Irish whiskey” is something of a misnomer though. Legally it refers not to the method of distillation, but rather to the mash. As in beer, the mash is the grain used in the distilling process. The Irish use a mix of both malted and unmalted, or green, barley. That practice results in a spicy, grainy flavor and a smooth texture. Irish whiskey is also required to age at least three years in oak barrels, otherwise it is basically Irish moonshine known as “potcheen.”

Another factor setting Irish Whiskey apart from its Celtic counterpart in Scotland is triple distilling (and the addition of an “e” in the word, which the Scots don’t do). A few Scotch whiskeys are triple distilled, but the process is most closely associated with the Irish. In fact, the vast majority of Irish distillers employ the process which produces a silky smooth whiskey that finishes crisp and clean.

So, if you are going to stay clear of the green beer this year (and who wouldn’t?), why not celebrate old Saint Patrick with some top-notch Irish whiskey? Here are our picks.

Redbreast ‘Single Pot Still’ 12 Year: For a long time, Redbreast was the only 100% pure pot still Irish whiskey available in the United States. It’s balanced with a characteristically chewy mouth feel and has some fruit in the nose. It’s Irish elegance.

Midleton Very Rare Whiskey 2012: Midleton is part of the famous Irish Distillers group which also includes Jameson, Redbreast and others. Only 50 casks are produced each year so Midleton Very Rare is as good as its name. It may be the pinnacle of Irish whiskey.  Slippery smooth with orange, citrus notes.

Powers John’s Lane Release 12 Year: Powers is also part of the Irish Distillers group and tremendously popular in Ireland.  This is another pure pot stilled whiskey but it takes a different tact than the Redbreast.  Boldness is the key here. It’s bottled at 92 proof and will keep coming at you like an Irish prize fighter.

Here at Atlantic City Bottle Company we’ll be offering half-price whiskey specials on all Irish whiskeys for the entire St. Patty’s Day weekend in the Iron Room. In the retail store, all Irish whiskeys will be marked down 10% off as well. Now that’s what we call “going green.”