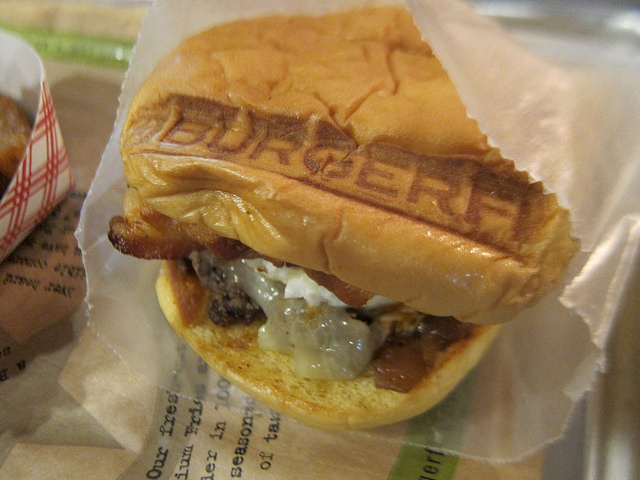 Some trends are born of necessity. We can debate the essential nature of the great cupcake boom of late or the present-day doughnut domination (of which I, personally, am a big fan). But there’s no denying that both our political and economic culture deeply influence trends in art (which cooking is), and thus our consumption. In recent years, we’ve started trying to be kinder to the earth and to our bodies, and more mindful of what we put into and take out of both. The 2000s also brought on a recession, making saving money not only a perk, but a requirement. At first, organic, green, and sustainable eating seemed like a pipe dream for many of us: reserved for those who could afford such a luxury. But as its importance became more apparent, so have attempts at its accessibility.

I think that’s what’s most exciting about BurgerFi, the Florida-born burger chain that has just added its newest home (and first New Jersey location) at the corner of George and Church Streets in New Brunswick. It’s taken all of the elements we seek in eco-friendly eating and paired them with a modernized take on the humble burger joint. Best yet, it’s wrapped all of that up into a tasty and affordable package.

Jersey Bites was invited to attend their recent preview opening, where dozens of BurgerFi employees, family, and friends bustled in to welcome the chain to the Garden State. The corner location was abuzz when my mother (the birthday girl) and I arrived around 7 p.m., the doorway congested with excited eaters. It took a couple of tries to figure out where and how to order (the menu text could be a bit bigger and clearer), but once I did, the staff was extremely friendly, attentive, and patient with my indecisive mental filing through the extensive list of toppings.

BurgerFi unquestionably borrows inspiration from its burger brethren—Shake Shack-style ordering, complete with separate ordering lines and buzzers, and Five Guys-level of generous offerings of accoutrements. It has glistening, bright decor with stainless steel and lime green accents reminiscent of the Shack’s signature scheme. Hot dogs, craft beer, wine, and concretes? I’ll admit, it sounds a bit too familiar and, unfortunately, such imitation begs for comparison to its predecessors.

The uniqueness behind BurgerFi’s concept lies in two areas: its commitment to sustainability and its superior, both in size and content, selection of toppings.

The L-shaped dining room, while less than ideal spatially, is clean and well-appointed with tables made of compressed recycled wood, chairs made of recycled Coke bottles, and sprawling ceiling fans that break up what could be a too-industrial design. Its “farm-to-tray” approach promises meat that is never frozen, sustainably farmed, and free of antibiotics, hormones, chemicals, and additives.

Burger toppings are divided among free and premium options and contain the basics, of course: lettuce, tomato, pickles. However, the treat is in the variety beyond those three items. Choose from four different cheeses (Swiss, American, bleu, and white cheddar) or two different steak sauces (the premium option, Peter Luger, from the legendary Brooklyn institution). Top it with salt and vinegar potato chips…because I didn’t, and I regret it.

The menu has a few pre-determined options that are pretty neat, including the VegeFi burger made of quinoa, the Breakfast All Day Burger topped with fried egg and a hash brown(!), and a Brisket Burger. On this night, I decided to build my own and go all out for…you know…research purposes. I gave the patient cashier my order: a single patty with white cheddar, sautéed onions, hot sauce, bacon, and a fried egg. And a Cry and Fries—mostly ordered for its cute, autobiographical name—a side of onion rings and fries. As I said, research.

I was handed a buzzer and began the search for a table…a task that will hopefully prove a little easier during regular business days. After several minutes, my mom and I were able to snag a table in front of the counter. My buzzer violently shook shortly thereafter and I promptly swooped my food from the pickup counter. Clusters of people were blocking the Coke Freestyle machine and adjacent condiment stations, but everyone was in good spirits and another customer accommodated my request for a cup of ketchup before I retreated back to the table.

What awaited me was a reasonably-sized, well-portioned burger with BurgerFi’s signature sear-stamp on its squishy bun and an enormous onion ring set atop a generous portion of fries.

I started with the fries…in order to properly judge a fry, it must be tasted at its peak of heat and freshness to then assess its integrity as a continuous side dish through the end. I’m happy to report that BurgerFi absolutely set itself apart in this department. Medium thickness (classic Jersey-diner thickness), skin-on, crispy, flaky exterior and fluffy, potato-y innards. They were well seasoned, perhaps verging on being too salty toward the bottom, but they remained crispy and sturdy throughout the remainder of the meal.

The burger was really a perfect, handheld size, constructed in a tidy stack that gave each bite an equal distribution of toppings and didn’t get too messy in the process. Best of all, and perhaps most importantly, the fried egg was cooked perfectly. In my first bite, I felt the burst of egg yolk and its subsequent drip down my chin. I smiled gleefully. 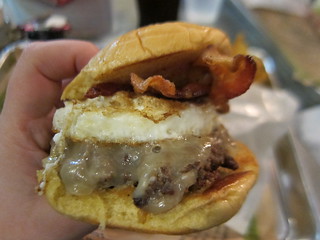 The burger itself was good. A tad under seasoned and a touch overcooked, but tasty and simple. The egg yolk provided a little of the needed moisture. The crisp, thick hickory bacon offered a significant and welcomed textural contrast from the otherwise wet ingredients. Great bacon makes all the difference in the world. Often, sad, thin, floppy bacon will be hastily thrown atop a burger or sandwich and leave you aimlessly chewing with sadness and regret. I’d probably pass on the sautéed onions—they were too, almost sugary, sweet. The hot sauce didn’t add much—it was hot, and that was about it. And I know that artisan breads and buns are a staple in the “better burger” movement, but I really prefer a simple, squishy bun – white or potato. It’s familiar and functional make any burger easier to eat than a giant, crusty, detracting bun. Let the burger speak for itself.

And finally, atop my stack of fries, was the giant onion ring, the “cry” to my “fries.” BurgerFi’s onion rings are among the best seasoned I’ve tried. The batter was crispy and thick with a really nice buttermilk flavor. The onion itself was enormous and thus could have afforded to be cooked a little longer, but overall…definitely worth a return consumption.

BurgerFi has a lot of burger competition within a few blocks of its prime George Street location. It is, however, the only restaurant of its kind to serve burgers in a fast casual setting while still offering a hearty, restaurant quality burger. And a full meal (plus a full craft beer selection) for under $10? New Brunswick students and employees have a new option of food they, their tastebuds, and their wallets can feel good about.

Jessica Perry is a lifelong New Jersey resident and Journalism and Media Studies graduate whose love of music, food, and writing about both have taken her far beyond the Garden State lines. She hasn’t heartwarming childhood memories of Sunday suppers, but she does have a lifelong commitment to eating across the map and fervently consuming food media. While she loves traveling and sampling from her nationwide restaurant document, little can compete with readily available pork roll and 24-hour diners. When she’s not eating, she’s at a punk show or researching where to eat en route to one. She’s always accepting recommendations for the best brunches, bagels, burritos, buffalo wings, barbecue…you get the idea. Not to mention she will happily dole out some of her own, whether you’re in Long Beach, NJ, or Long Beach, CA.