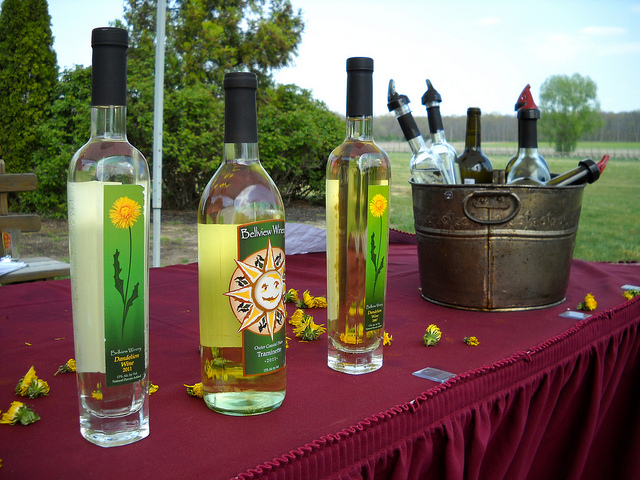 This weekend, Bellview Winery of Landisville will release its Dandelion Wine 2013, just in time to kick off spring. Produced since 2005, Dandelion 2013 will be the ninth vintage from Bellview Winery, using an 80-year-old family recipe. To date, Bellview is one of only four wineries in the country that produce a wine from 100% dandelions, and they are the only producer of such a wine on the east coast.

Using Jim Quarella’s Great Aunt Ada’s recipe, the wine is produced exclusively from the dandelion flower. It develops into a sweet dessert wine with touches of eucalyptus and chamomile. Bellview harvests the flowers from local Petrongolo Farms in Hammonton, which grows dandelions for commercial use in salads, raviolis, and in this case, wine.

According to Quarella, “I make it exactly the same way she did, using the old family recipe, my secret. Aunt Ada is gone now, but I think of her every time we make the wine.”

Bellview Winery will be releasing the new vintage to the public on Saturday, March 22, available for both tasting and purchase.

Bellview Winery has been in operation for close to 15 years. First established in 1914 as a vegetable farm, owner Jim Quarella made his first transition from vegetables to grapes in 1999, switching exclusively to grapes in 2002. The vineyard now covers close to 40 acres, with more than 20 different varieties, each as unique as the next. Bellview Winery has won numerous accolades over the years for its wine, with a number of Gold and Double Gold medals, and it took home the title of New Jersey Winery of the Year in 2012.

Jennifer Malme is a writer based in Vineland, in Cumberland County. She is the author of Down-Home South Jersey, a lifestyle blog about her adventures living in the Garden State, and in addition to being a contributor to Jersey Bites, she contributes to Sharrott Winery blog. Jennifer enjoys reading, cooking and exploring the wineries of New Jersey.