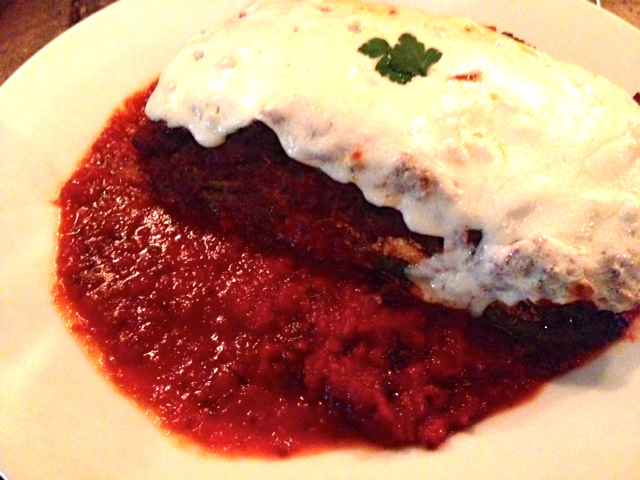 The New Italian, In An Old Italian Neighborhood

I tried to wait for a warm day to make the 10 block walk up to Otto Strada, Hoboken’s newest Italian spot. But it’s winter. And with the winter we have had so far, if it was forecasted to be above 15 and snowless, I was making plans and sticking to them.

When I arrived my friend was already seated at a table along the wall. At 6:30 on Friday, several of the 14 table tops were already occupied. As I pulled off several layers of clothing (hats, gloves, another set of gloves…) I took a look around. A small, tastefully designed space—rustic, yet warm; modern, but comfortable.

I pulled a bottle of Nero D’ Avola out of my purse. “Cellar-temperature,” I joked. The winter walk was good for one thing I guess. Shortly after, the co-owner, Joe Cascetta, came by to welcome us. I had told him I would be there. I wanted to hear the story of Otto Strada, opened just two months ago, and it goes something like this:

Cascetta grew up in Hoboken, in the same building now anchored by Otto Strada, “My parents still live upstairs,” he says as he gestures upward. Nick Rutigliani, a longtime friend, co-owner and current chef at Otto Strada, had had his hands in a number of area restaurants and had recently closed one, when the two started to collaborate. Both are of Italian descent, Cascetta’s roots are from the Campania region on the west coast, Rutigliani’s from Molfetta, on the southeast coast. Along with Cascetta’s wife, Lindsey, and her mom, Connie Bednar (both from Pittsburgh), the family team has created a menu that blends influences from both coasts.  He tells us the menu will be changing shortly after Valentine’s Day, adding just a few more dishes, but mostly focusing on seasonal ingredients.

After helping us navigate the menu, recommending dishes, explaining a few of the ingredients and the cooking processes, Cascetta left us to make some tough decisions. Ultimately we ended up sharing two appetizers: drunken octopus with limoncello sauce and an insalata di cavolo verde: kale salad. For entrees, my friend chose the chicken Milanese and I opted for brick oven baked eggplant parmesan. I’m so easily tempted by eggplant.

There was a continuous stream of diners entering as the two of us caught up and then as our dishes arrived. The octopus, as promised, was perfectly tender. Cascetta had explained it’s cooked three times: boiled, grilled then baked in the brick oven. It does the trick.  There were no tentacles left uneaten. We also shared a hearty salad of kale, pumpkin seeds and Tuscan beans with a spicy mango vinaigrette. It was dressed perfectly—not too much or too light on the dressing and the kale was very fresh. Just the right amount of crunch.

Entrees arrived. I received a “brick” of eggplant parm, nestled in a shallow bath of chunky tomato sauce. A hearty portion to say the least. My friend’s chicken was breaded and browned and laid on top of fresh arugula. She had worried that asking for the dish without the cheese or proscuitto might affect the flavor, but as she polished it off, she remarked she didn’t miss it. And if we hadn’t had enough, Salsiccia, an appetizer of sausage, broccoli rabe and grilled peppers was sent out—courtesy of the kitchen. The blend of flavors was superb and by far my favorite dish on the menu. It’s an appetizer, but could have easily been enjoyed as a meal.

By the time we were ready for the check, Cascetta attempted to entice us with some gelato, rattling off at least five flavors. I had most of my eggplant still in front of me. We had to pass. It was a little tough to track down our waitress, but we understood. At 8 p.m. on Friday, the small restaurant was at capacity and three couples huddled by the front door. While the restaurant does allow diners to bring their own alcohol, the food prices compensate for lost booze revenue. An average couple should expect to spend $50-65, plus tip.

When I had heard there was a new Italian restaurant in Hoboken, my initial thought was, “15 isn’t enough in a square mile?” but I was more than pleasantly surprised with what this family has created. The food shows that there is more to Italian food than what chain restaurants would lead one to believe. Along with a BYO policy AND reservations, this might just be my new Italian go-to spot.

Wine Pairing: I quickly reviewed Otto Strada’s menu, noticing a wide array of dishes from light to hearty. I wanted a wine that had a good tannic structure to stand up to the bigger dishes, but wouldn’t overshadow light dishes like seafood. I picked up a bottle of Purato Nero D’Avola, made with organic grapes, from local wine shop Sparrow in Hoboken, NJ. This wine struck just the right balance, with bright red fruit and balanced tannins. A medium body and a pleasant but short finish. At $10.99 a bottle, this wine is a great value.

Karin Nastawa grew up in the great Garden State, leaving only briefly to attend college in Philadelphia, where she developed a love for all things cheese steaks. She has lived in Hoboken for over nine years, taking in the incredible dining scenes on both sides of the river and has a particular affinity for staking out interesting BYO establishments in Hudson County. She is the founder and owner of VinEatsi, a boutique wine & food digital marketing agency and has also studied wine and spirits extensively, receiving her advanced degree from the Wine & Spirits Education Trust (WSET). Along with running VinEatsi, she is an avid cook and food enthusiast and writes about her wine & food adventures in the VinEatsi blog. She dreams of having a chef’s kitchen and a state-of-the-art wine cellar filled with Sonoma Coast Pinot Noir and Left Bank Bordeaux… someday.