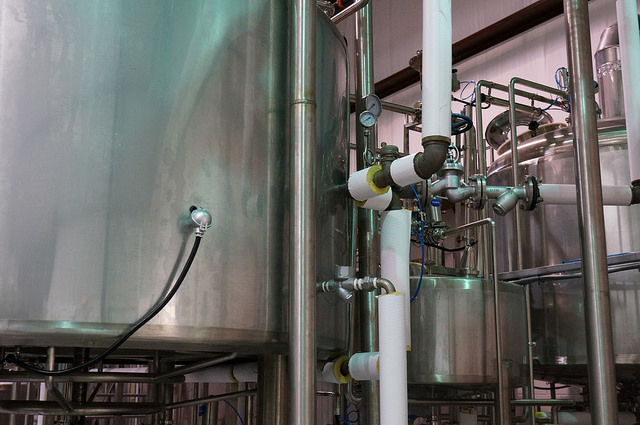 When I asked Rinn Duin’s Chip Town what caused the often delayed opening of the brewery, his exhaustive sigh told the story. It wasn’t one big thing, it was a million little things. He never imagined all the plumbing work that goes along with starting a brewery. Disaster almost struck again when, an hour before their soft opening, a pipe froze. The luck of the Irish was with him, though, and the problem was quickly fixed. At long last, Rinn Duin officially opened on January 23.

Even the name was a problem. Jacqui Town, Chip’s daughter, explained that the name of the brewery harkens back to a castle in Ireland where the family has its roots. The original name was Blackthorn, but that had to be scrapped because a UK cider company already had it.The renamed Rinn Duin celebrates the old sod by brewing beers based on the styles from the UK and Ireland.

The beer styles commonly found across the pond are subtle and nuanced. On my brewery tour, ably conducted by assistant brewer Charlie Ryan, I could see that Rinn Duin is set up with a high tech 25bbl system designed to carry out those delicate styles. There is a palpable pride in that system, which shows on the faces of the entire Rinn Duin staff.There’s a lot of know-how, too. The tour wasn’t just an exercise in checking the box to get to the tasting room. Newbies and old hands alike will find something to pique their curiosities on the tour.From the main system’s state-of-the-art, precision controlled fermenters to the klugged-together flower boxes incorporated into the test batch system, there’s plenty to learn.

The tour ended, as they all do, in the tap room. It definitely shows some Celtic character and has nice big windows looking into the shiny new brewery. Jacqui’s mom and sister were found behind the bar, making Rinn Duin a true family business. Unfortunately, their flagship Irish Red wasn’t on tap, but there was a rare treat instead. Lawnmower is an English blonde ale that’s named for its light hue and grassy, thirst quenching quality. Right next to it was a version dubbed Lawnmower in Exile. Exile was hopped with the almost impossible to find Galaxy hops from New Zealand. The floral nose and tropical fruit notes completely changed the character of the beer but not its essence. I also tried the Sandpiper English brown ale which was nutty, a little sharp, but right on style.The final offering was the Trinity Smoked Scottish 70. There is a faint, pleasing hint of peat smoked malt that would go nicely with your haggis. That is, if you like haggis. If not, you’ll be just as happy with the beer.

So, what’s next for Rinn Duin? First, they will be getting their bottling line up and running so you’ll be seeing six-packs at your local liquor store in the not-too-distant future. Then there’s the pilot system: no self-respecting beer geek would leave without asking what’s brewing. Possibilities include a chocolate rye porter, a coffee stout, a Welsh Bitter or an authentic English IPA. You will probably have to head to the brewery for those, so budget time for a tour. And bring your growler. Fancy some shepard’s pie, toad-in-a-hole or bangers and mash? I know I do.

Check out Rinn Duin online or stop in to taste some beer inspired from across the pond.