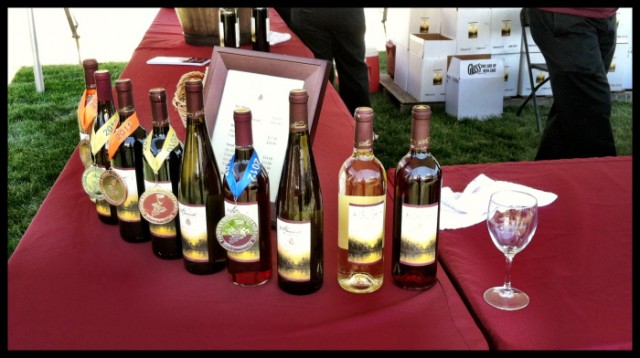 The New Jersey Wine industry has had its share of doubters from the beginning. Mostly known for their sweet, fruit-based wines, vintners in the Garden State have fought long and hard to showcase quality grapes and wines worth drinking. Throw in the constant comparisons between the terroir of New Jersey’s Outer Coastal Plain and Bordeaux, France, and you have some high expectations to satisfy. Bellview Winery in Landisville was awarded a Gold Medal in the “Other Reds” Category for their 2012 Blaufränkisch, a dry red varietal that is known as Lemberger in some regions. Often compared to Pinot Noir, it is a unique red wine with bold notes of fig, vanilla and a black pepper finish. Blaufränkisch is just one of the more than 20 varieties of grapes grown on the 40-acre farm owned by Jim Quarella. Bellview Winery has won numerous accolades over the years for their wine, with a number of Gold and Double Gold medals, as well as taking home New Jersey Winery of the Year in 2012.

But winning in San Francisco is especially rewarding. According to Quarella, “This win is important to Bellview because it helps to validate what we’ve known all along: New Jersey wine can stand up to the best. We’re happy to see our wine being recognized on such a scale that people are taking note of Bellview Winery and the Outer Coastal Plain AVA, realizing just what we have to offer. We’re proud of our grapes and wine, and glad to get to share this with people who enjoy good wine as much as we do.”

Bellview Winery’s 2012 Blaufränkisch is available now and sells for $28.

Winning Gold in the “Merlot $15.00 to $19.99” category is Old York Cellars in Ringoes, for their 2012 Merlot. Winemaker Scott Gares blended New Jersey grapes with those sourced from California’s Sierra Foothills to create his award-winning Merlot. Like many New Jersey Wineries, Old York Cellars has had to supplement its grape supply to keep up with the growing demand for Garden State wines. Gares admits that the East Coast climate and the prevalence of frost and mildew can make it hard for New Jersey vineyards to produce large quantities of quality fruit. But winning Gold makes it worth the effort.

Old York Cellars 2012 Merlot is available for pre-order and will be released this spring. It sells for $18.99.

Sharrott Winery in Blue Anchor brought home the Gold in the “Chardonnay $20 to $25” category with its 2010 Barrel Reserve Chardonnay, a rich, buttery chardonnay with aromas of tropical fruit and a long, smooth finish. And this is not Sharrott’s first time to the dance. In 2010, Sharrott Winery’s 2008 Cabernet Franc won Gold at SFCWC, bringing in new business and exposure for the winery.

Owner and winemaker Larry Sharrott, II, who runs the winery with his son Larry III, finds validation in a big win like this one. “I want to make good wine,” he says. “Winning on a national level like this proves that we are accomplishing our goal. Our Chardonnay is a great wine that happens to come from New Jersey.”

Jennifer Malme is a writer based in Vineland, in Cumberland County. She is the author of Down-Home South Jersey, a lifestyle blog about her adventures living in the Garden State, and in addition to being a contributor to Jersey Bites, she contributes to Sharrott Winery blog. Jennifer enjoys reading, cooking and exploring the wineries of New Jersey.