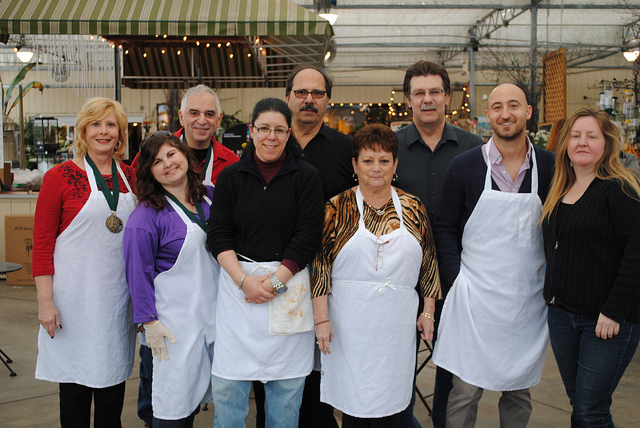 Sunday gravy: Two words that spark immediate salivating and stomach growling. For those not of Italian heritage (this includes me), Sunday gravy is a tomato-based sauce usually made with onions, garlic, spices, and some type of meat(s). If you had an Italian grandma, this is what you would be eating on Sunday afternoon.

There’s no one recipe for Sunday gravy, so Dearborn Market in Holmdel decided to put the locals to the test in their Sunday Gravy Cooking Challenge. On Sunday, January 26, nine participants cooked up oversized pots of gravy and fed it to the masses to see whose gravy would reign supreme.

Nicole Luccarelli Karras, director of marketing and promotions at Dearborn Market was excited to bring another cooking competition to customers. In the past two challenges, cooks displayed their skills in chili and chicken noodle soup recipes. If eating delicious food isn’t good enough, all proceeds from the event benefited Bridges Outreach, which delivers over 100,000 brown bag meals to people in need in New York and New Jersey each week.

This cooking competition was sure to be just as successful. Cooks prepared their Sunday gravy best for customers and the judges to sample. Frank Luccarelli, president of Dearborn Market, Kathy Logan of Bridges Outreach, and Anna Perry of Anna’s Italian Kitchen in Middletown, had the not-so-unfortunate job of taste-testing all the sauces and deciding who would win a $100 Dearborn Market gift card and trophy. The winning gravy will also be featured in Dearborn Market’s March Almanac and ready made in the deli case.

Before the judges arrived, I sampled all of the recipes, chatted with the cooks, and learned that every single one of them used a family recipe and then put their own spin on it. Surprisingly, every sauce was different. From hot sausage, braciola, veal, and even chicken, each cook put his or her own mark on a dish that everyone loves.

After deliciously careful deliberation, the judges declared the winner to be Gloria Arcuri with her Siciliano Sugo Con Carne di Gloria recipe. Arcuri was also the Customers’ Choice Winner. Following close behind was Lori Carscadden with her Sunday Poultry Gravy, which was gluten and dairy free, and Joseph Bove’s Assunta Maddalena’s Gravy Recipe.

“My husband had a heart attack during Hurricane Sandy and I wanted to start cutting our sodium intake so he would get better,” said Arcuri. “I use salt essence instead of salt, which contains only 60% salt.” Once I tasted her sauce, I didn’t believe it. The sauce was everything a Sunday gravy sauce should be and it had almost no salt!

I also had the opportunity to speak with her husband, who was cheering her on the whole time. He noted her 50-50 Polish/Italian background, and proudly said that her Polish mom could cook better than any Italian he’s ever met. Then he pointed out that his wife takes after her mom.

It was a tough challenge made up of tasty sauces and passionate cooks, but in the end Gloria Arcuri proved that her sauce reigned supreme.

Melissa Beveridge is a freelance journalist and editor, focusing on great food, healthy living, and wellness. Her passion for eating and living well embodies her writing. A lover of all things Jersey, she is also an avid traveler, always looking to discover those hidden culinary gems everywhere she goes. Her musings can be found on her blog mbeewell.wordpress.com.