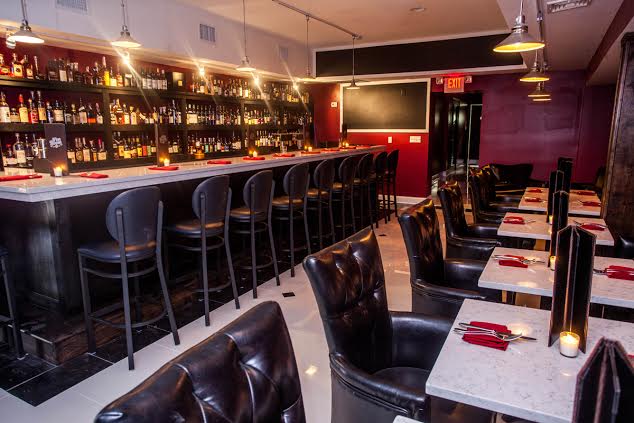 The Iron Room, that ultra swanky, intimate speakeasy-style bar and restaurant located behind Atlantic City Bottle Company, has been voted the #1 Restaurant in Atlantic City by TripAdvisor, the world’s largest travel site. This top distinction was bestowed upon the still relatively new restaurant out of 330+ more well established restaurant staples in the AC area.

The Iron Room (named such as a nod to the recently-retired Monopoly playing piece) specializes in seasonal and ever-changing small plates. Its continually-evolving and distinctly American menu is handcrafted daily by Executive Chef Kevin Cronin. Chef Kevin says what makes the menu American is that it’s a hodgepodge and mashing of culinary cultures that creates an interesting and exciting gastronomic melting pot. The chef designs his mouthwatering menus by using the freshest ingredients, most of which are sourced locally, and borrows inspiration from tapas bars, gastropubs and from of his own extensive culinary experiences.

If you’re a real foodie, you may want to reserve the Chef’s Table, a four- to five-course tasting menu, specially prepared by Chef Kevin. Or join in during the Sunday Supper Club, an event designed for true epicureans, the premise of which is that the secretive menu is not revealed until diners are seated at the table. (Consider it a private food party for those with a sense of adventure!)

The Iron Room now also has not one, but two, daily happy hours—an early one and a late-night one. Both the early happy hour from 3:00 to 6:00 p.m. and the late-night version from 9:00 p.m. to close, have awesome deals on food items like steak tartare and their famous cheese plate, as well as drinks like the Hooch of the Day (i.e., cocktail du jour).

Speaking of drinks, the top-notch bar at The Iron Room is loaded with an enormous selection of brown liquors (over 230 whiskeys, Scotches, and bourbons) and a unique variety of craft beers that also rotate frequently.

The humongous wine list is comprised of varietals from places including France, Italy, Germany, California, Washington, Portugal, and Spain. But Paul Tonacci, the restaurant’s Certified Wine Specialist and co-owner, is particularly proud of their lovely selection of wines from New Jersey. For those celebrating a special occasion, The Iron Room’s Champagne and sparkling wine list not only rivals, but surpasses those of any casino restaurant.

Mark Callazzo, the restaurant’s other co-owner, developed The Iron Room and Atlantic City Bottle Company from an idea he had of “…an upscale wine and spirits store that people could not only shop in, but that could offer them more, such as an intimate lounge area for folks to eat outstanding food and drink extraordinary craft beverages.”

Each week, The Iron Room has fabulous bar specials like half-priced whiskeys or wine by the glass. And if you enjoy what you’ve been drinking, you can take it home with you. Atlantic City Bottle Company, the boutique-like packaged goods store adjacent to the restaurant, carries all the beverage items found on The Iron Room’s menu. In the next few weeks, look for awesome events like complimentary wine tastings every Wednesday, beer-, whiskey-, and wine-pairing dinners, tap takeovers, live music, and fun and educational wine and cheese classes.

With a terrific lineup of events, an incredible beverage selection, and food that you’ll be talking about for months to come, it’s really no wonder that The Iron Room has been touted number one in Atlantic City.

Pamela Dollak: Currently Pamela is a freelance writer with The Press of Atlantic City and Uwishunu.com, she has her own weekly shopping column (“Shop Atlantic City”) on AtlanticCityInsiders.com, and a weekly nightlife column (“5 Things to Know About…”) in At The Shore Magazine. A former New York P.R. maven, Pamela Dollak has written on and pitched everything from fashion and foster care, to veterinary medicine and vitamin-enhanced water, to personalized perfume and Peter Max. Fascinated with fashion from an early age, Pamela opened a boutique called Tony, which became a go-to spot in Philadelphia for cocktail dresses, casual wear and accessories for six years. Both she and the shop won multiple awards and accolades and were featured in various fashion publications as well as on local television programs. Pamela is also an actress who has been seen on stages from Philly to the Jersey shore. As for food, she may not be able to cook a lick, but she knows good food when she tastes it!