We’ve been asked to share with the rest of America some Jersey-themed menu items for their Big Game party guests. After all, the game is in New Jersey. (Can someone knock that chip off my shoulder?)

Since the big game is in the Garden State, here are our suggestions on how to bring a piece of Jersey to your living room. Just remember, whatever you decide to offer guests, be sure to serve it with a little side of sarcasm for a true Jersey experience.

Sausage and Peppers or better yet, Italian Hot Dogs. According to Wikipedia this is a Hot Dog indigenous to Essex, Hudson, and Passaic counties in north-eastern New Jersey and the boardwalk of the New Jersey shore. It’s origins date back to the 1930′s in Newark, New Jersey.

Any good Italian food would work. (Cue the Sopranos them song.) Or how about a diner-themed party?

Pizza: Now, we know you won’t be able to get real New Jersey pizza and we’re sorry about that.  After all our pizza is the best in the country. (shut up New York) But here’s a recipe that is claimed to come straight from the owner of Star Tavern known for some of the best Pizza in New Jersey.

Disco Fries: I have personally never had Disco fries, and didn’t grow up knowing they were a “Jersey” thing but, evidently, true Jersey Disco fries are covered with brown gravy as well as cheese. (In Canada, it’s known as Poutine, and the fries are covered with fresh cheese curd and brown gravy.) By the late ’70s Poutine found its way to New York and Northern New Jersey diners.

Blueberries: If you’re looking to offer something a little more healthy, we are the Garden State after all.  Hammonton, New Jersey is known as the “Blueberry Capital of the World.” So try this Blueberries and Corn salad to bring a little Garden State to your plate. 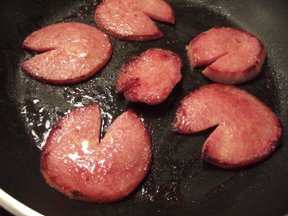 Ok, back to unhealthy.
Pork Roll or Taylor Ham: It’s only an “OR” thing if you live in New Jersey. North Jersey knows it as Taylor ham and South Jersey as pork roll. Neither side knows what the heck it really is, but we know it tastes great with egg and cheese or on a burger (and especially when you’re hungover).

Speaking of hangovers, be sure to wash all that pork roll down with one of Flying Fish’s Exit Series Beers. According to their website, “The Exit Series™ of beers is a multi-year brewing experiment to brew a series of beers as diverse as the great state of New Jersey.”  The latest on their tour of New Jersey is Exit One, Bayshore Oyster Stout.

And last, but certainly not least, here’s a recipe for The Jersey Burger, from our friends at the Salt Creek Grille.

1. Preheat the grill to high.
2. Form the meat into 4 (1/4-inch thick) burgers and season with salt and pepper on both sides.
3. Grill for 2 to 3 minutes on both sides for medium doneness.
4. When the burgers are done, remove from the heat and reduce heat to medium-low.
5. Meanwhile, combine the mayonnaise and roasted garlic in a small bowl and season with salt and pepper, to taste.
6. Spread both sides of each bun with mayonnaise and mustard.
7. Place a slice of cheese on the bottom portion of each bun, place the burger on top of the cheese, then top the cheese with a slice of pork roll and another slice of cheese.
8. Place the tops of the bun over the meat, wrap the burgers in aluminum foil, and place them on the grill.
9. Lower the lid on the grill and continue grilling for 1 to 2 minutes, or until the cheese has melted and the bun has become pressed and firm.

Deborah Smith, founder of JerseyBites.com. Launched in 2007, JerseyBites.com began as a home for Deborah’s growing collection of recipes, but soon grew into a hub for food news in the Garden State. In addition to her duties on JerseyBites, Deborah is the owner of Foxtrot Media, a full service digital marketing company that specializes in content development, social media marketing and search engine optimization.  She is also a highly sought after speaker on the topic of restaurant marketing, social media and blogging. You can learn more about her services and marketing through social media on her blog www.DeborahLSmith.com.