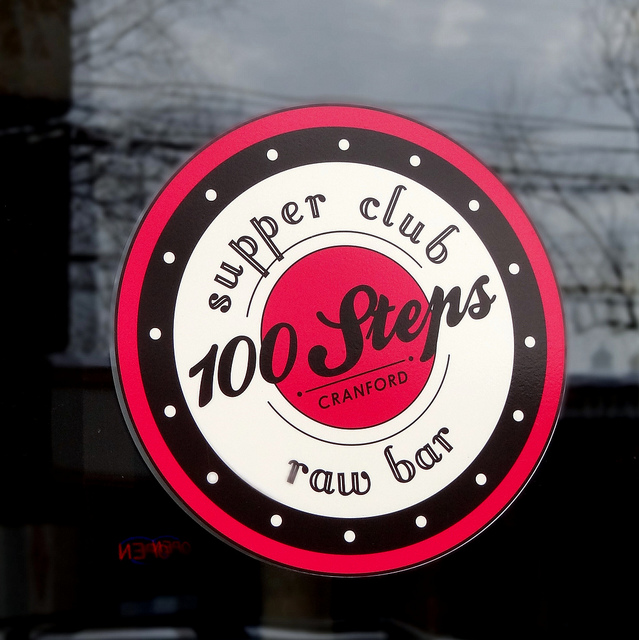 I don’t like to play favorites, but when you only get to go out to dinner once a month you have to be picky about where you go. And yet month after month my husband and I leave the baby with a set of grandparents and head over to A Toute Heure. What can I say? A delicious meal there is as close to a sure thing as you can get.

But now we have an option that’s both new and familiar at the same time. The owners of A Toute Heure, Andrea and Jim Carbine, have opened up a new restaurant that’s literally across the street. They’ve named it 100 Steps, as that’s the distance from one restaurant to the other. And they have a familiar face in the kitchen with Kara Decker, the executive chef from A Toute Heure, heading up 100 Steps.

The Carbines had the itch to expand their restaurant but couldn’t decide the best way to do it. They considered expanding into the upstairs at A Toute Heure, but when the nearby space became available they knew they couldn’t pass it up. 100 Steps is 1/3 bigger than its sister restaurant and will offer walk-in seating, in addition to taking reservations.

100 Steps was conceived not only as the chance for the Carbines to open another restaurant, but to also provide Decker with new challenges and opportunities. Decker has been at A Toute Heure for six and a half years and was thrilled to put her own stamp on a new restaurant. She’s most excited about the oyster bar at 100 Steps, which will change its offerings frequently. The chef also pointed to the pastas and charcuterie board as items that differ from the offerings at A Toute Heure. 100 Steps uses most of the same farms that  provide product to A Toute Heure but will not adhere to using strictly local ingredients. The menu will be seasonal, though, and change on a quarterly basis.

Decker may control the menu, but the Carbines conceived the concept for 100 Steps. The awning advertises it as a “supper club,” which is something Jim was familiar with growing up in the Midwest. 100 Steps plans to have a more social feel than A Toute Heure, which has a distinct bistro feel. The new restaurant has truly been a labor of love, with the Carbines, Decker and their dedicated staff working around the clock to bring it up to the standards people have come to expect. I have no doubt they’ll deliver on people’s expectations to the fullest.