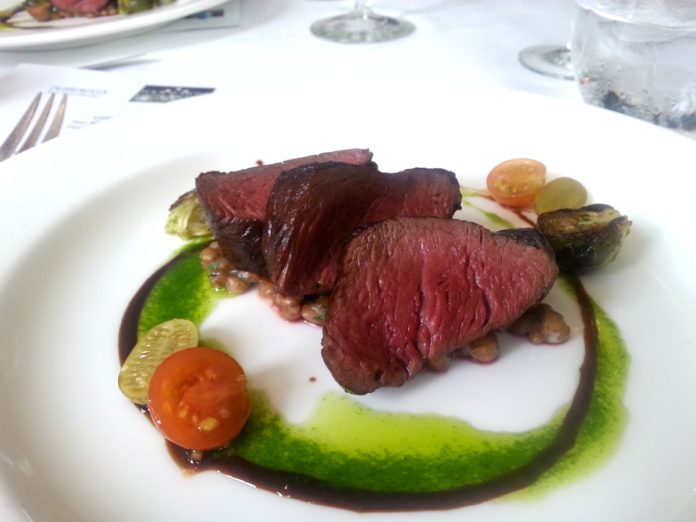 Thirty of New Jersey’s top chefs gathered at the beautiful Ryland Inn in Whitehouse Station, for an eye-opening seminar and mind blowing four-course venison lunch under the weight of some pretty sobering news from the Centers for Disease Control and Prevention.  But more on that later.

The event was put together by Jersey City’s DeBragga & Spitler Inc., which supplies naturally raised meats to restaurants and consumers nationwide. DeBragga brought in New Zealand’s Graham Brown, the executive chef and international ambassador for Cervena venison since 1991 to demonstrate proper preparation of their pristine venison.

According to a recent report released by the Centers for Disease Control (CDC), at least 2 million Americans fall ill from antibiotic-resistant bacteria every year and at least 23,000 die from those infections. The report goes on to state that 70% of antibiotics in the United States are given to animals. So while we love to blame overzealous doctors for prescribing unneeded antibiotics, we are administering antibiotics to our families pretty much every day in the food they eat.

What I found fascinating in listening to Graham’s presentation was that New Zealand has been farming deer and elk since the 1970s. Their venison is antibiotic-free and naturally lean. Unfortunately, I’ve never been a huge fan of venison. Gamey and tough is the first thing that comes to mind for most of us, right? The difference with farmed venison, I learned, is that the age of the animal and their diets are completely controlled. You’re not at the mercy of the chance meeting of a lucky hunter and one unlucky deer. As Ryland Inn’s Chef Anthony Bucco (far left) plated the first course with help, I clip-clopped around the beautiful kitchen in my awkward high heels trying to catch a glimpse of what was in store for everyone. Our first plate was Charred Venison Tartare (pictured above) with pear mostarda, Peruvian chicha gelee, candy-striped beets and mustard cracker. This was prepared by The Ryland Inn’s Chef d’Cuisine, Craig Polignano. If I had been blindfolded and given a forkfull from this dish, I honestly would have had a very, very hard time identifying what it was. First of all, I had no idea what “peruvian chicha gelee” is,  but a quick call to Chef  Bucco cleared up my confusion. Chicha Morada is a drink made of blue corn in Peru. They took this blue corn drink with notes of pineapple and created a gelee to bind the venison together to complete the Tartare. The sweetness of the Chicha blended beautifully with the richness of the meat.

Our next course was a maple syrup and berry tea smoked venison served with blueberry-pear chutney, walnuts and blue cheese foam created by Cervena Venison’s Graham Brown. This dish was light, and delicate and kept all of us muttering, “this can’t be venison.”

That gorgeous plate right above is the venison tenderloin. Rye, smoked tomato, Brussels sprouts and pastrami spice created by Marty Keter of Ninety Acres. This one really conjured the eyes-closed, slow-chew, minute of silence with a few audible “mmmmm’s” in the background.

Deborah Smith Launched JerseyBites.com in 2007. It began as a home for her growing collection of recipes, but soon grew into a hub for food news in the Garden State. In addition to her duties on JerseyBites, Deborah is the owner of Foxtrot Media, a full-service digital marketing company that specializes in content development, social media marketing and search engine optimization. She is also a highly sought after speaker on the topics of restaurant marketing, social media and blogging. You can learn more about her services and marketing through social media on her blog www.DeborahLSmith.com.