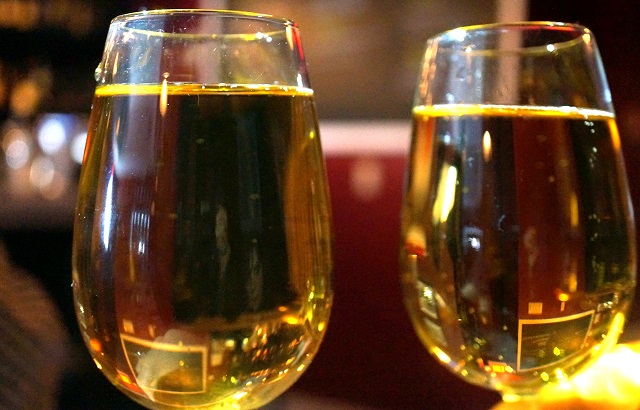 It was really a no-brainer. When you get an invitation to spend a Sunday afternoon hanging out with beer author Gary Monterosso, and sample beer pairings and some of the tastiest food in Atlantic City in a room full of female beer-lovers, you say yes.

This event was put together by Tara Nurin, beer writer and founder of Beer for Babes, an informal band of women dedicated to exploring better beer. While the group is female focused, they do invite men to their events so I didn’t have to dress in drag to attend. It would have been worth it though. If you are a woman interested in exploring the craft beer scene check out their Facebook page. I’ve been jealous of their events for some time so it was great to finally get to one!

The guest of honor, Gary Monterosso, (pictured above left) is one guy you need to have a beer with. He is the author of Artisan Beer and shares his knowledge in a casual, witty way while keeping things lively with stories and anecdotes. Head over to his website and find out where he’ll be next. If you get the chance, ask him about the time the original beer bard, Michael Jackson, slept over his house or how he ended up on the History Channel.

The group was rounded out by photographers, beer bloggers, one birthday and Jacqui from the soon to be opened Rinn Duin Brewery in Toms River.

The stars of this show, however, were the parings. The Atlantic City Bottle Company is one of the gambling mecca’s newest gems. Its North Albany Avenue location makes it a nice, quiet alternative to the bustling boardwalk scene. There is a quality bottle shop in front but the back room is where our event took place.

The Iron Room is a cozy little bar and lounge that features the very talented Chef Kevin Cronin and a thoughtful tap selection (not to mention wine and whiskey)! It’s worth a visit just for the beer, but let’s take a look at the fare.

First up was the apple and parsnip soup with Prosecco and fennel. The pairing for it was a surprise — cider. Cider is quickly gaining popularity and proved to be a perfect match. Produced by Farnum Hill, it was fairly dry and had a pleasant earthy quality that really let the apple shine. It left me to rethink a beverage I would not normally reach for. Tuckahoe Brewing is one of South Jersey’s premier breweries and was featured in the second and perhaps most interesting pairing of the day. Their pumpkin ale came out with shaved sweet potato, pine nuts and shaved parmigiana. The sweet potatoes were cooked like fresh pasta would be done — a quick bath in boiling water. Indeed, the result looked just like pasta. Sweet potato pie is often a stand-in for pumpkin pie because the same spices marry well with both. It was only natural that pumpkin ale would be a wonderful complement. There’s something to be said for finishing with a flourish. Chef Kevin certainly did that by creating a little conundrum for himself. He presented squab two ways: a fried chicken-style leg and breast meat with a Shirah, balsamic and molasses reduction. Is there one beer for both of those dishes? I would have said no, but Ommegang Game of Thrones Take the Black Stout did it. It was a clever choice and a prime example of how creative the Atlantic City Bottle Company is with flavor.

Keep an eye out for more beer related events at the AC Bottle Company. I think they had as much fun presenting this pairing as we did partaking in it.

Peter Culos is the editor of “Beer Bites,” a monthly feature about breweries, bars and good beer in the Garden State. A graphic designer by day, and a lifelong New Jersey resident, Peter was  introduced to the novel idea that beer could actually have flavor during several visits to the UK. He’s been riding the craft beer bus ever since. It has been called the ultimate social lubricant and Peter’s philosophy on beer is, “I’d rather split my last good beer with a friend than drink the whole thing by myself.” Besides beer he also likes history, dogs, Jeeps and painting. Peter has written a History and Art blog for the Weider History Group and occasionally contributes to his own blog, history-geek.com. Life is short. Drink good beer.