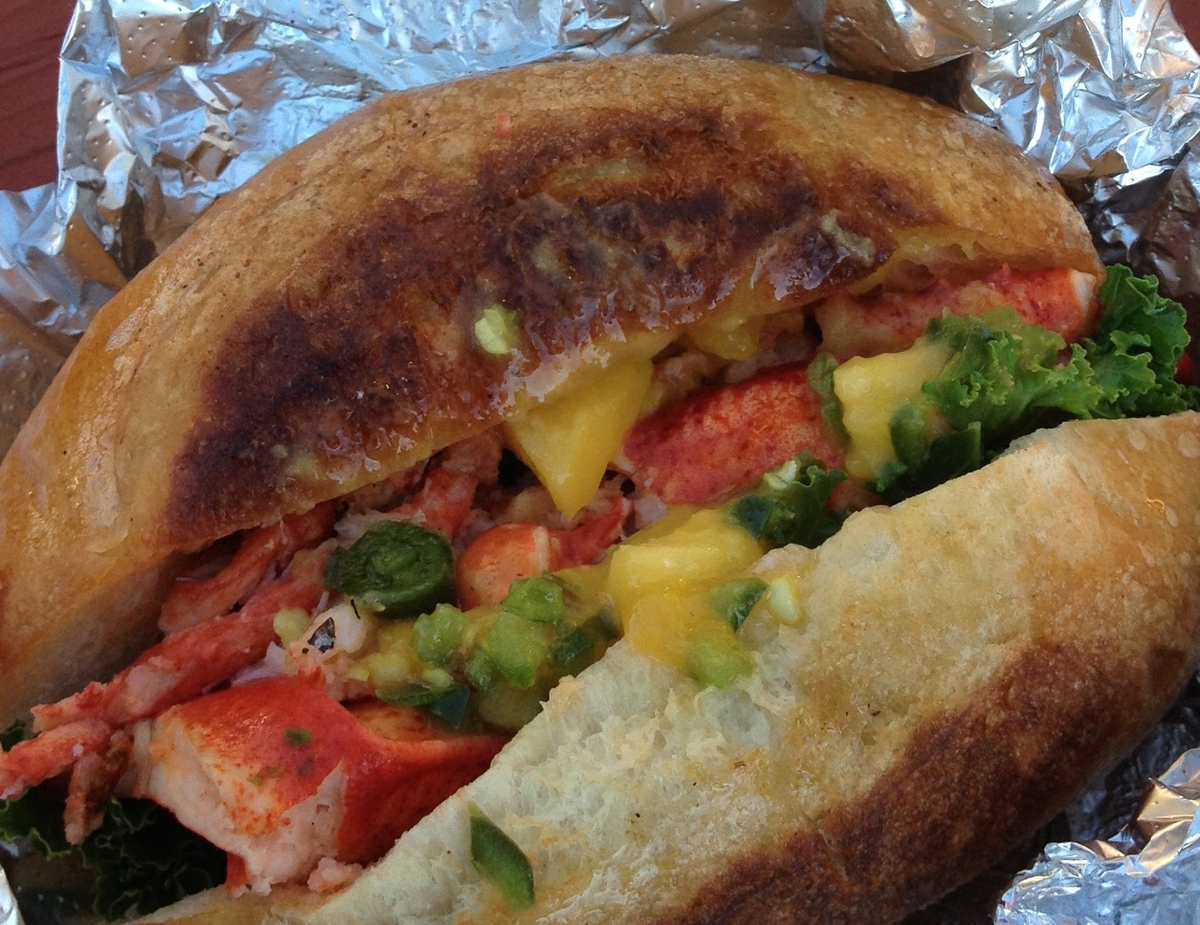 There may have been a chill in the air, but the day was spectacular for those of us who bundled up and ventured to check out the Food Trucks & Fire Pits Event hosted by Laurita Winery in New Egypt on November 2 and 3.

It looked like a shopaholic’s version of an amazing flea market, with trucks and vendors lined up neatly on an endless dirt row, tempting all Foodies with their diverse offerings. And they were very successful in their tempting!

We walked the full length, snaking our way through the mob of folks who waited patiently to see if the food was as exceptional as the names and logos on the trucks. With wine in hand, most were already munching on spiral-cut fried potatoes on a stick, Belgian waffles with the most unusual toppings, and classic Philly Cheesesteak sandwiches.

After surveying the 20 trucks in the lineup, we opted for warm lobster rolls from Surf and Turf, which we paired with Laurita’s crisp, grassy chardonnay. At first glance, neither of us was very impressed, but when we had a taste, we were both speechless. This little unassuming split-top roll was packed with flavor, big time! The lobster was in generous chunks that were sweet and buttery, slathered in a mango and jalapeño salsa and blanketed with a layer of fresh, sautéed kale and cabbage—very luscious. And oh yes, delicious! We understand now why they were voted the Best Food Truck in Ocean City!

Next stop was a clever little sardine can of a food truck called Dark Side of the Moo, hailing from Hoboken. Not more than 20 square feet, this truck was tricked out with a grill, a steam table, a refrigerator, and a working counter. Their ability to pack in their foodstuffs and function throughout the day was nothing short of a miracle. Their menu offered wild boar burgers and buffalo or alligator sausage sandwiches. After a nice, friendly chat with Trevor, we purchased elk burgers, which we paired with Laurita’s Barcelona red, a nice round Cabernet-merlot blend that complemented the elk perfectly. Very good, very fresh, loved the burger! Right about then might have been a good time to say “Enough!” but no, we just kept right on indulging our curiosity as our eyes fixated on The Morris Truck menu, specializing in various grilled sandwiches like bacon-delicate cheese and NY State cheddar with NH Landaff Gouda corn and chile butter. Crazy stuff!

Making up our minds was no small feat. Next on our lineup was the most awesome grilled cheese either of us had ever eaten: close your eyes and imagine how decadent truffle cheese married with caramelized shallots, and wedged between two slices of Jewish rye slathered in truffle butter and grilled to a toasty perfection could be. We didn’t have to imagine, we got the real deal. Ah-mazing is the only word to describe it!

Realizing our limits, we opted out of dessert and wrapped up the night with friends, finishing our wine around a bonfire while singing (off key) along to Pennington Station Band, which was cranking out some of our favorites tunes from the ’70s.

Life is good at Laurita. We’re going back! Wayne and Anne Galya learned how exciting food could be back in Junior High, when the Wood Shop class elective was completely filled and his guidance counselor encouraged the guys who didn’t make the cut to take Cooking, instead.  “Why would I want take a cooking class? Wait a minute…cooking = girls! Heck yeah, sign me up!”  And there began his love affair with all things relating to food, making it, serving it, eating it…. Back in those days (the 70s) Culinary Art Careers had not yet become the rage, so I didn’t consider it an option and when I graduated from high school, I began a 39 year career as an Industrial Electrician.  But, I never lost my passion for the Art, and even produced my own CIA chef, my son Wayne! One of the greatest joys I have is seeing what other chefs are doing, as it challenges me in my own kitchen. Many friends and family have enjoyed the re-creation of dishes that I have savored in France Italy and the Caribbean, as well as regional dishes from across the US.