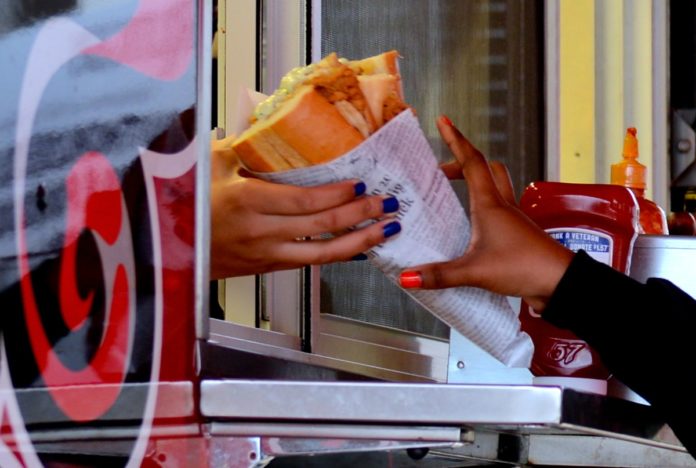 Long before they were all the rage across the U.S., food trucks were a staple of the Rutgers University dining scene. They remain a popular part of the university’s landscape, and on any given day (or night), students, faculty, staff and visitors can pick up $6 or $7 sandwiches packed with mozzarella sticks, french fries, chicken nuggets, bacon or onion rings (or all of the above!). The sandwiches have names like “Fat Cat,” “Fat Russian,” and of course the “Fat Mom” and “Fat Dad.”

The Grease Trucks parked on campus in the 1980s on College Avenue, and were originally open 24 hours a day. A closing time of 3 a.m. became standard in 1996, to coincide with the times bars were closing.

The sandwiches themselves originated in the 70s, when a local restaurant started selling the “Fat Cat,” which consisted of two cheeseburgers, fries, lettuce, tomato and mayonnaise on a bun.

The “Fat Cat” still exists today, along with so many more! Many sandwiches are created from customer suggestions, and fat sandwiches are now available at a number of New Brunswick food establishments. For many students, the food trucks, also lovingly known as the Grease Trucks, offer a fun, albeit less healthy, alternative to dining hall fare. My friend Simone Shopowich said she’s eaten at the Grease Trucks once, and was a fan of the mushroom omelette on a hard roll.

“I was looking for options other than the fat sandwiches, and the mushrooms omelette turned out to be a good breakfast choice,” Shopowich said.

In the spring of 2013, the Grease Trucks had to pack up and move locations because of redevelopment on College Avenue, and they are now located on Senior Street, between Alexander Library and the Army ROTC building. Other locations include George Street and various spots on the Cook/Douglass campus. Overall, students acknowledge that the sandwiches are not gourmet, but what the trucks may lack in that department, they more than compensate for in terms of convenience and tastiness. In the college world, an early bedtime is 1 a.m., and food is always a necessary accompaniment to late-night study sessions. The trucks are great for a late-night snack, long after the dining halls close.

While one student guesses that the sandwiches must average at least 1,800 calories, another student applauded the food truck sandwiches’ tendency to bring instant gratification to students. The food trucks are also known for their “Fat Sandwich Challenge,” where individuals with big appetites can get a sandwich named after them if they can consume five fat sandwiches in 45 minutes or less. When I asked sophomore Miguel Colombani what his strategy would be for taking on this challenge, he said, “I’d probably starve myself for two days beforehand.” If Colombani came out victorious, his own sandwich, he said, would include bacon, cheesesteak, mozzarella sticks and french fries. Fat sandwiches are by no means the only game in town for the trucks. Options also include eggs, falafel, hot dogs, gyros and kebabs.

Love ’em or loathe ’em the food trucks are legendary at Rutgers, and sure to remain a signature part of campus life for years to come.

Sabrina Szteinbaum, Editorial Intern, is a sophomore at Rutgers University majoring in Journalism & Media Studies, but that’s just the basics! She is a Jersey-born, city-loving foodie who can be found running around New York City in search of the best cupcake, cookie, piece of cake, etc. to write about on her baking blog. Sabrina has been baking since age 12, and has been documenting her confections at “The Sugarcoated Life” since August 2012.  At Rutgers, Sabrina works as a correspondent for The Daily Targum.  Her love of journalism has landed her the roles of newscaster and assistant news director on WRSU, one of Rutgers’ radio stations.