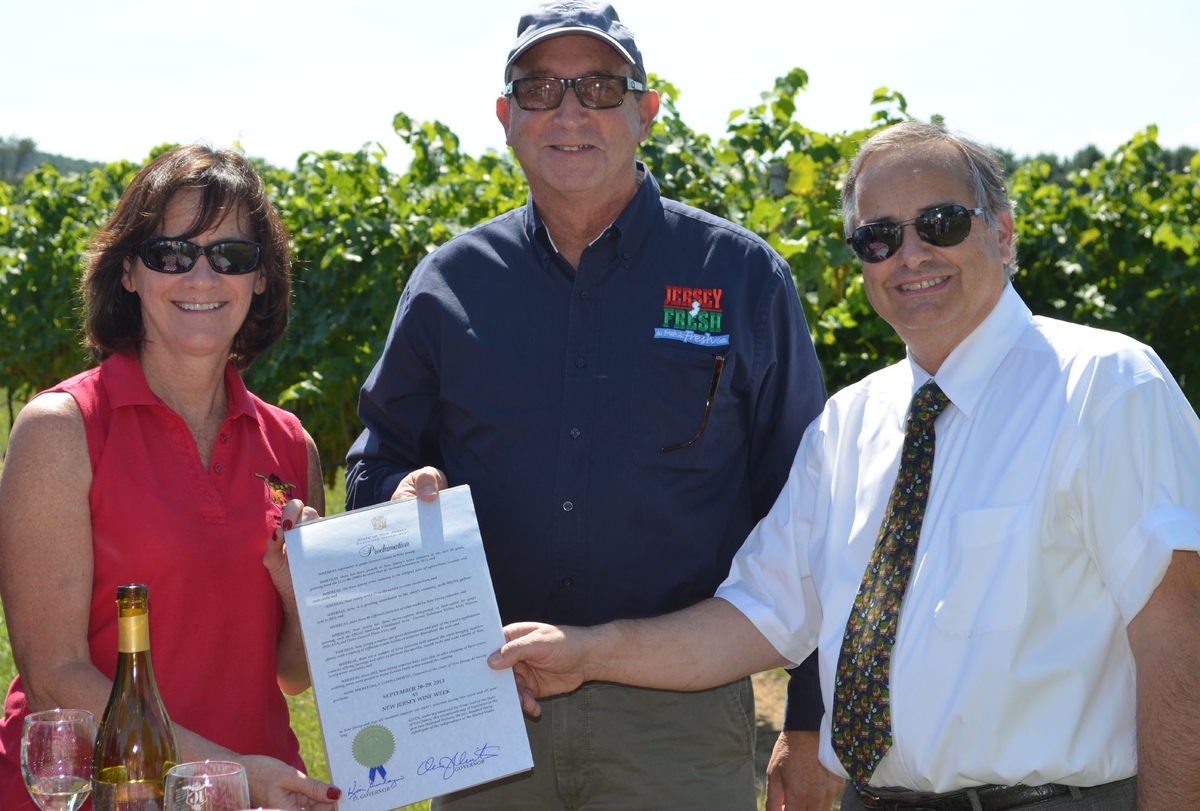 Governor Christie signed a proclamation declaring September 20 to 29 New Jersey Wine Week, honoring the wine industry for being a growing contributor to the state’s economy.

“Not only do New Jersey’s wineries produce some of the best and unique wines in the world, but they are an integral part of the state’s agricultural industry and help preserve open space,” said Secretary Fisher.  “Wineries, such as 4 JG’s Vineyards, also are important parts of the community and tourist destinations, bringing revenue to the surrounding area.”

New Jersey has more than 45 licensed wineries.  New Jersey is 7th in the nation in wine production, with more than 1.5 million gallons produced in 2010.  Many wineries now offer shipping of their wines within New Jersey and into other states thanks to a 2012 law signed by Governor Christie.

Four JG’s Orchards & Vineyards is a 60-acre farm named after its four owners, John and Janet Giunco and their two children, John and Jill.  The Giunco family has farmed in Monmouth County for more than 60 years.  John’s parents raised apples and peaches.  John, a lawyer, and Janet, a former IBM marketing employee, opened 4 JG’s in 1999.

“We opened our winery because of our love of wine and collecting wines,” said Janet Giunco.  “Our grapes are grown with passion and care and we make a great product that pleasantly surprises most folks.”

The Giuncos are hand-harvesting their grapes right now to produce a variety of “estate” wines, made only from grapes grown on their property.  In addition, they sell many tons of grapes to other New Jersey wineries.

Four JG’s is one of 38 member wineries of the Garden State Wine Growers Association.

“We are very proud to have the Governor recognize the important role that New Jersey wineries are having on the state’s economy by declaring NJ Wine Week,” said Ollie Tomasello, Chairman of the Garden State Wine Growers Association and owner of Plagido’s Winery in Hammonton. “We are producing a great product here in the state as our wines are winning awards throughout the country. We hope all New Jerseyans come out and visit our vineyards and tasting rooms not only during wine week but throughout the year.”

New Jersey wineries have many fall activities.  For a listing of wineries, visit http://bit.ly/1a743yf.  For more information about the Garden State Wine Growers Association, go to www.newjerseywines.com.