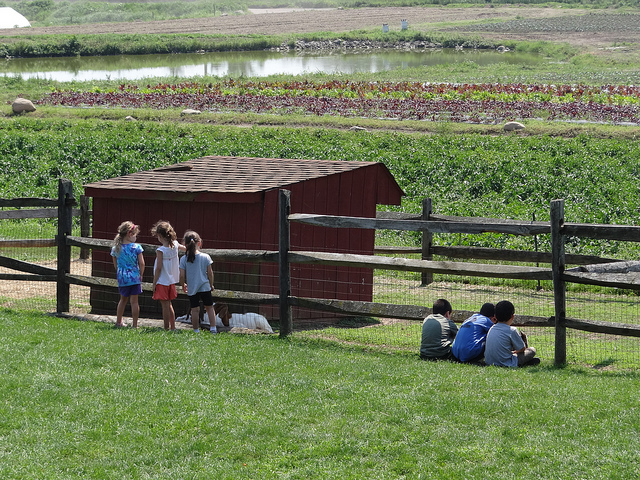 Growing up in Bergen County our weekends usually revolved around heading to one of the many, many malls in the area. So when I was contacted to tour farms in Bergen County, I was surprised – how had I grown up in the area and not realized that there were working farms so nearby? The truth is, both DePiero’s Country Farm in Montvale and Abma’s Farm in Wyckoff have been around for decades, selling quality produce and goods and creating a devoted following in the process.

DePiero’s in Montvale is open 7 days a week, closing only for Christmas and New Years. The farm first opened in 1924, while the actual store was built in the 1980’s. DePiero’s is a true family operation, with the 4th generation currently working there and overseeing all aspects of the farm. This summer DePiero’s grew and sold a number of New Jersey staples including eggplant, tomatoes, cucumbers, and squash. If there is any additional produce they need they turn to other local farmers so they can sell it at the store.

The first thing you notice when you walk in the door at DePiero’s is the smell of fresh-baked goods. The bakery offers an impressive selection of baked goods including breads, pastries, pies, and their famous black and white cookies. Once fall rolls around the bakery will sell apple cider donuts and a variety of pies including pecan, coconut custard, apple, and pumpkin. The fall season is by far the busiest on the farm as it offers hay rides, a corn maze, and pumpkin picking. DePiero’s also has a greenhouse that will be filled with mums shortly, a customer favorite when the weather gets cooler.

The list of items DePiero’s sells is staggering. The farm sells goods from other local purveyors including pickles, olives, and peppers from Picklelicious in Teaneck and pasta and sauce from Vitamia and Sons Ravioli Co. in Lodi. The farm also sells coffee, oils, vinegars, honey, cheese, sausage, and even has a butcher. DePiero’s was extremely lucky last year during Hurricane Sandy as the farm never lost power. Many of their customers weren’t as lucky and flocked to the store.

Over in Wyckoff, Abma’s Farm is also a family operation, with the fourth generation currently working on the farm. On its grounds the farm has a market, greenhouse, and petting zoo. Abma’s started as a chicken coop operation, but it soon became clear that the family couldn’t make enough money just on eggs. The chickens were moved out of the barn and the space was reinvented as a store. The family makes a point of only selling things that they would eat. Besides fresh produce grown at the farm, they also sell baked goods, farm fresh eggs, honey from beehives on the premises, and pork from pigs on the farm. Abma’s apple pie and chicken salad are two of the farm’s claims to fame – both are made in-house, of course.

Abma’s makes a large effort to involve the surrounding community. This was the first year that the farm offered a CSA program and the response was overwhelming, with 67 customers signing up. Abma’s also held a Corn Fest this summer and offers free workshops throughout the year. Just like DePiero’s, Abma’s also gets very busy in the fall with hayrides and pumpkin picking. The life isn’t an easy one, but the farmers at Abma’s were resolute that they’re in it for the long haul. Their enthusiasm for the farm is evident everywhere you look, and we should be so lucky that the farm is around for at least another 4 generations.