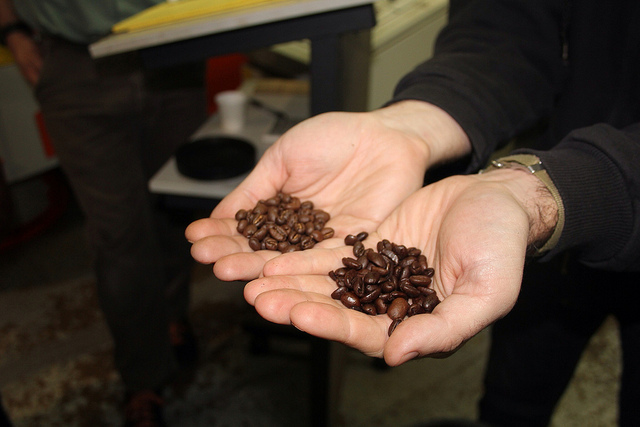 Fifteen seconds is a long time in the coffee world. Those few seconds make a huge world of difference in the flavor and roast of the beans.  I learned what an exacting science and art coffee roasting is at a “Backstage Pass” tour of the Small World Roasters, given by Jon March, owner and Master Roaster and Tim Hinton, quality control manager.

Small World Roasters, roasting beans since 1997, offers “Backstage Pass” tours monthly. The facilities are tucked in a small industrial complex in Skillman, about four miles north of Princeton.  Roasting beans in 50 pound batches takes between 12 to 15 minutes. The beans tumble in a cast iron drum reaching a temperature of up to 430 degrees. 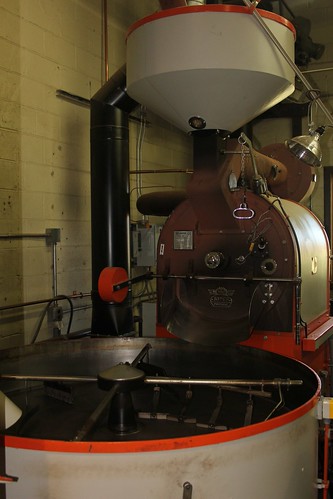 During the first six to seven minutes of the roasting period, a lot of moisture comes out of the bean, causing the bean to puff up and crack or pop as the water evaporates. Two to three minutes later the beans will pop again and thirty seconds after the second pop, the beans are ready to come out of the roaster, where they are cooled under a fan to stop the cooking process.

The roasters look for the beans to turn a chocolate color and develop a sheen from the oils coming to the surface. The shiniest beans are used in a dark roast called “Crispy Hippie,” which is roasted a mere 15 seconds longer than the regular roast. The beans are slightly burned, giving the dark flavor. Each bean in a blend is roasted individually for maximum control over the flavor and roast, since beans from different locations have varying roasting times. Up to 150 pounds of coffee can be blended in the cooling trays at a time.

To make their two decaf coffees, Small World uses a Royal Water process from Mexico to remove the caffeine. Decaf coffees lose a lot of their nuances, due to the nature of the process, which changes the flavor of the bean. Another caffeine removal process not used by Small World is methanol chloride. 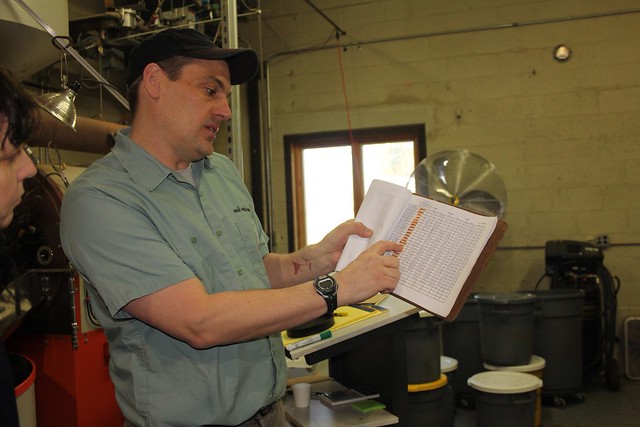 Balance between acidity and body make the best tasting coffee. Acidity is the vibrancy of the flavor and the liveliness on the palate. The weight of the coffee makes up the body, along with viscosity and the fat content of the milk. The body also affects the finish of the coffee in your mouth.

The best coffees are grown in countries along the equator and the most flavorful are grown in higher altitudes. In the higher altitudes, the less oxygen in the air produces a denser bean that keeps its flavor longer. Coffee grows like cherries on a shrub-like tree. This tree takes seven years to mature and the coffee beans are the “pits” of the cherries.

There are two species of coffee–robusta, which has the most caffeine and more acid per cup and is the most common type of bean, or the arabica, which is used in specialty coffees. When coffee is roasted, it should be consumed within two weeks for maximum flavor, as it has been at Small World. Coffee served at the two cafes in Princeton and partner restaurants is delivered from the roaster within three days of roaming for freshness.

The tour, limited to small group, was very informative and I learned way more than I could fit into this story. All coffee lovers should take it, especially since it’s followed by a tasting.

The Backstage Pass tours are offered once a month and cost $25, including a half pound of freshly roasted coffee. Information can be found on the Small World website at http://store.smallworldcoffee.com/CategoryProductList.jsp?cat=Backstage+Pass

Victoria Hurley-Schubert, Regional Editor Ocean County, is a true Jersey girl. Raised in Marlboro, Vikki  has lived in the area her whole life. She loves to experiment in the kitchen and is happiest when feeding a houseful of friends and family. A journalist for 10 years, she now serves as media coordinator at the Princeton Regional Chamber of Commerce. Vikki is happiest on the road, so it should be no Surprise she is a travel agent specializing in Disney destinations.   Follow her on Twitter @vikkihs. – See more at: http://www.jerseybites.com/the-team/#sthash.PakB0XJ9.dpuf