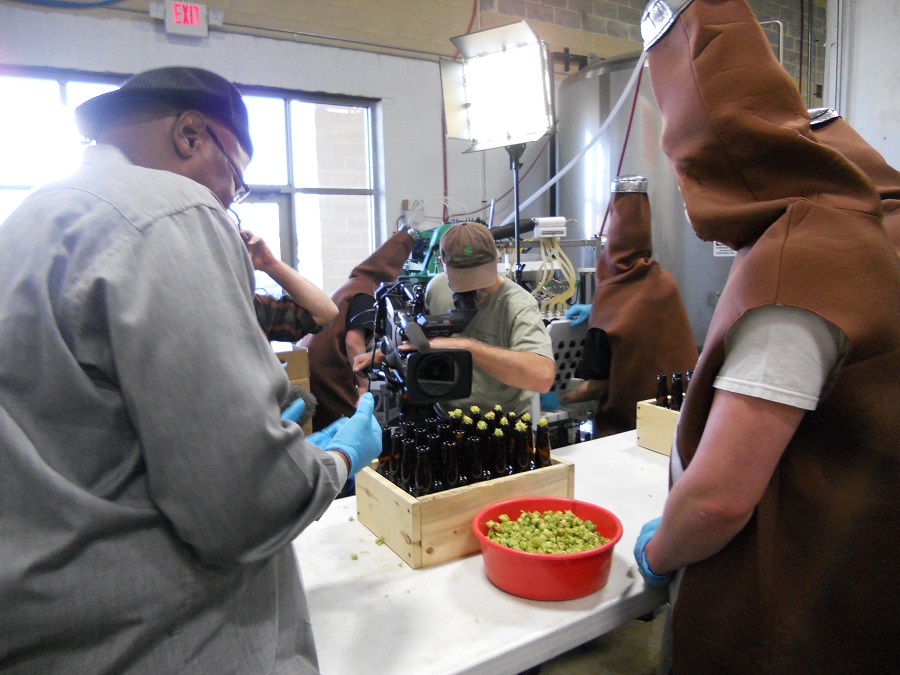 “I have some of the best brewers in the country put their hand on my shoulder and say, ‘Try this.’”

David Page of Page Productions was the producer behind Diners, Drive-Ins and Dives for over a decade. Now, craft beer is his passion.

A number of years ago he tried to pitch a show about craft beer in the US, but only got as far as a sizzle reel.  As he put it, “everyone is afraid of the liquid.”  So, he put his money where his mouth is and personally funded Beer Geek TV then got it nationally syndicated.   New Jerseyan’s who can tune in to WLNY (part of CBS New York) will be able to watch it this coming fall.  For those in the Philly market, well, he’s working on it.  If that’s your area, you might want to drop a line to the local TV station.  You’re not going to want to miss this. David Page came to beer “as a civilian”, as he puts it, but fell in love with it as he traveled around the country meeting the cast of characters that brew some of the finest and wackiest beers in the country.  “These are people that you want to hang out with” he told me.  Every show is different because every brewer has their own unique way of doing things and they put their own original spin on creating flavors that will challenge your palate.  Here are a few things you can expect to see on Beer Geek TV:

At Hair of the Dog Brewing in Portland, OR head brewer and “mad scientist”, Alan Sprints, insists on brewing with old dairy equipment.

Take a trip to up to the mountains with Denver Brewing Company to pick Juniper berries to make Finnish style Sahti.

Head up to Boston and Harpoon Brewery to make oyster stout… using the meat instead of the traditional shells.

These are the entrepreneurs that have elevated the United States into the epicenter of a worldwide craft beer renaissance, but Beer Geek TV is not just about the beer.   Chefs across America are finding that beer goes great with a meal.  David believes that a lot of the craft beer craze is fueled by food and how beer can make almost any dish sing.  With that in mind, each episode concludes with a beer and food pairing.  Sometimes beer is part of the recipe.  Cupcakes, turkey pot pie, elk osso bucco and bahn mi (Vietnamese bread) are all made with beer!  Conversely, food also makes its way into the beer; smoked pepper beer, peach gran cru, and bourbon cherry stout.  Foodies are not left behind on this show.

The glue that holds the whole thing together is the host, Michael Ferguson, Director of Brewing for BJ’s Brew Pubs.  David refers to him as “the best natural talent I’ve ever worked with.”  Check out the trailer and you’ll see why.  Clearly Ferguson knows his stuff, feels comfortable in front of the camera and has great timing.  He started out brewing for the venerable Gordon Biersch in 1990 and also is an accomplished Chef.  Suffice it to say, Ferguson knows a thing or two about beer and food. If you’re not careful, he’ll teach you something too.

Of all the cool things you’ll see on Beer Geek TV, there’s something you won’t see:  A New Jersey brewery.  David and his wife are part time Jersey residents but he has yet to film in the Garden State.  That will change with season two which will start filming soon.  He couldn’t hide his enthusiasm about covering the brewing talent we have here and asked me to pass along his email address as part of this article.  So, Jersey brewers, contact him at david@pageprod.com and tell him why you should be on Beer Geek TV!

David Page produces 22 Beer Geek TV shows a season.  He agreed that it is a grueling schedule but it’s also “the best damn road trip ever!”   Traveling around the country, meeting the most interesting people on the planet, tasting the country’s best beer and sampling world class cuisine sounds like a good time to me.

I want my Beer Geek TV! Peter Culos is the editor of “Beer Bites,” a new monthly feature about breweries, bars and good beer in the garden state.  A graphic designer by day, and a life long New Jersey resident,  Peter was first introduced to the novel idea that beer could actually have flavor during several visits to the UK.  He’s been riding the craft beer bus ever since.  It has been called the ultimate social lubricant and Peter’s philosophy on beer is, “I’d rather split my last good beer with a friend than drink the whole thing by myself.”  Besides beer he also likes history, dogs, Jeeps and painting.  In the past, he has written a History and Art blog for the Weider History Group and occasionally contributes to his own blog, history-geek.com.  Life is short.  Drink good beer. – See more at: http://www.jerseybites.com/the-team/#sthash.J3LcUcFe.dpuf