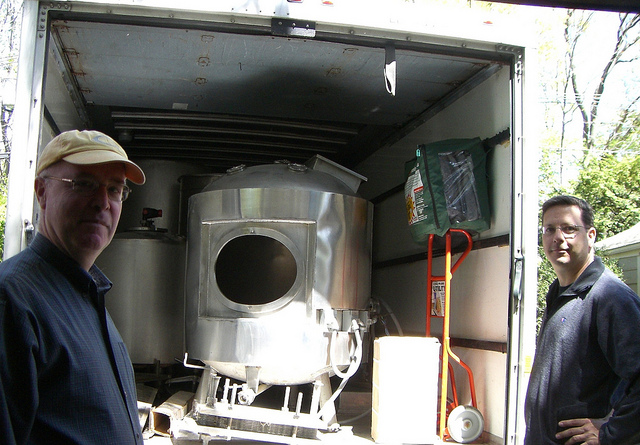 It didn’t take Gretchen Schmidhausler long to get the investors she needed to officially list her new venture, Little Dog Brewing, as a brewery in planning.  It’s not hard to understand why.

First, there’s her name.  It screams Reinheitsgebot!  She appeared on the local beer scene at the Red Bank Brewing Company in the late 90’s, did a brief stint at the Ship Inn (Milford) and then over a decade as Brewmaster at Basil T’s in Red Bank (where I interviewed her for my first article for Jersey Bites).  Along the way Gretchen medaled at the Great American Beer Festival 3 times (2 golds) and served as President and then Administrative Liaison for  the New Jersey Brewers Guild.  It was only a matter of time before she hung out her own shingle.

It started with GretchenBrew, LLC whose services include beer tastings, consultation, and beer education.  So, if you want your bar staff up to speed on craft beer, call Gretchen.  Do you have a group interested in pairing beer with cheese?  Call Gretchen.  Need some ideas on marketing your new pub?  Call Gretchen.  However, there has been one other thing calling Gretchen since she left Basil’s in 2011.  Like a Jack Russell pulling on your pant leg, she knew she would get back to brewing.

Gretchen is well on her way to accomplishing that goal.  In fact, she has already purchased a 4 bbl. system.  The only thing her Little Dog needs now is a home.  Not just any home, mind you.  Gretchen envisions a community environment for Little Dog, not a back lot in an industrial park.  She described the concept as a “storefront brewery.”  It would be a place that gets walk in traffic with a bike rack out front.  It would have a lively tasting room which would take advantage of New Jersey’s new laws that allow for on premises consumption and where she can practice her talent for beer education.  Little Dog would be a destination brewery where people learn to appreciate good beer and take home a couple of 22 oz. bottle’s too.

In keeping with the community theme, the tasting room hours would be limited so as to enhance patronage of the local bars and restaurants and not compete with them.  It’s an important and well thought out concept.  A major bone of contention during the debate about New Jersey’s new laws was that allowing breweries to start selling pints on premises would erode existing local bar and restaurant traffic.  The Little Dog idea is to draw attention, wet appetites and then send curious customers out to try other local haunts.  It goes something like this.  You stop in and learn about all the subtle nuances of a well crafted porter.  You also learn it goes great with beef short ribs and that the place down the block just happens to be known for their exceptional beef short ribs.  So, where do you go when the tasting room shutters its doors at five o’clock?

Little Dog will round out its concept by making sure is a comfortable atmosphere for a fast growing segment of new beer aficionados:  Women.   Smart move.  Also, in keeping with her German roots Gretchen plans on brewing innovative takes on classic styles and concentrating on seasonals too.  They will all be offered up in bomber bottles right from the get go so Little Dog won’t rely on draught only support in the beginning.  IPA is the most popular of flagship styles but Little Dog won’t rely on that either.  Gretchen was thinking maybe a Heffewiezen.  It’s that German thing again!

All that remains is to see which New Jersey town will adopt Little Dog.  Surely one of them is looking for a disciplined, intelligent and thoughtful approach to beer that will enhance their town’s vibe.