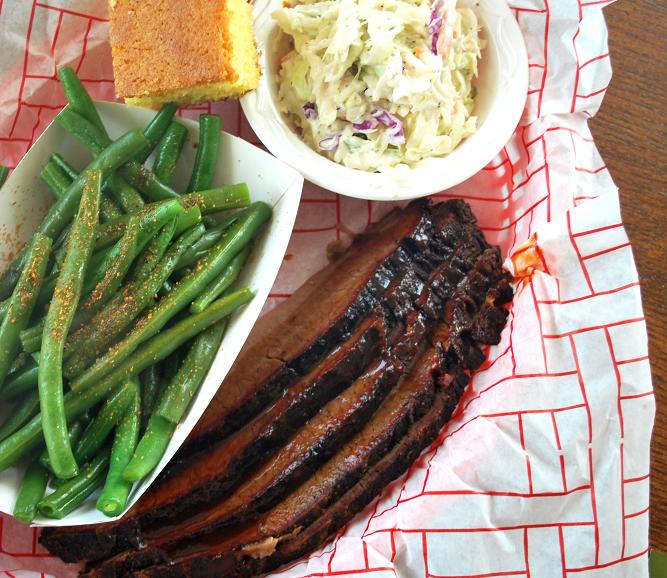 To say I love barbecue would be an understatement.  In fact, I am pretty sure Merriam-Webster has yet to include a word that adequately describes the way I feel about the delicious American staple.   Nothing makes me happier than sinking my teeth into a pile of sauce-covered meat.  Normally I consider myself a classy gal; I can wine and dine with the best of ‘em. However, put a plate of ribs in front of me and you might as well just give me a trough. Probably not some of my most attractive moments, but when you’re dripping in pulled pork, silverware is about as useful as the “Drink Responsibly” warning on a bottle of Jameson. By the time I’m finished, my face is a walking Bounty commercial and I half expect someone to call Mike Rowe to clean me up.

To be honest, my definition of “finger lickin’ good” has been skewed by my father’s bodacious barbecue.  After years of phenomenal ribs, succulent shoulders, and savory briskets, I have developed an affinity for all things smoked and smothered. Naturally, when I find a place that can crank out meat as mouthwatering as my father’s I get excited.

Such a place exists in an unlikely location.  Nestled on Rt. 35, in Neptune, sits a barbecue oasis owned by two Jersey Shore locals. While there are many attributes associated with “the shore,” good BBQ is usually not one of them.   Finding a hidden gem of this caliber is like spotting a un-tanned blonde in Seaside.  Fortunately, I had my friend Eric to lead me down the Yellow Brick Road.  Though I had sampled the delicious eats of Local Smoke BBQ countless times before at my other favorite neighborhood spot, Used to Be’s in Mantoloking, co-owner Eric Keating insisted that I had to come to their Neptune location for “BBQ done their way.”

I finally made the trip a few weeks ago, and I was as happy as a pig in… well you get the point.  From the moment you walk through the door the tantalizing aroma of luscious meat and smoldering wood fill your nostrils.  The restaurant itself has a refreshing “no frills just food” atmosphere; adorned with a communal counter, small tables covered with red checkered tablecloths, a chalkboard with featured menu items, and food served up hot and fresh in a red basket.  Don’t let the décor fool you though, there is nothing ordinary about their menu selections.  Naturally, they serve all of the standard BBQ fare, St. Louis Ribs that are hand rubbed, slow smoked, and smothered in tangy sauce and melt-in-your mouth Texas Brisket that is rendered for 14 hours.  If you like your barbecue with a side of inspiration, they also offer unique “Jerseyfied” comfort food creations with a bold twist. For a sweet and spicy snack try the Slow Smoked Jalapeno Poppers; cream cheese and pulled pork stuffed jalapenos that are wrapped in bacon and slow smoked or the crispy hand-battered fried pickles served with a BBQ ranch dipping sauce.

Almost as long and impressive as their menu, is their list of awards.  Local Smoke has won over 100 awards, including 1st Overall in the NJ State Barbeque competition in 2011 and 2009, 1st place Ribs in the 2009 American Royal BBQ competition, and Best BBQ for Monmouth County in the 2012 Asbury Park Press Best of the Best Readers Choice Awards.

With so many enticing choices it was hard to pick just one.  Of course, being the kind of girl who likes things stacked and juicy, I had to go for the Pulled Pork Sandwich. Talk about heaven between two buns! Atop a crispy white country roll was a pile of slow cooked pulled pork so high that could rival Snooki’s poof.  The tender pork was enveloped in a delicious blanket of subtle smoke and doused in just the right amount of their Carolina Sauce.  On top of the pork was a tangy homemade coleslaw that provided the perfect complement to the sweetness of the pork. That was definitely “some pig;” the perfect combination of texture and flavors. The slaw gave it a nice pop of crunch and the zesty vinegar based Carolina Sauce paired perfectly with the rich taste of the pork.

Accompanying my aperitive sandwich was a generous helping of creamy potato salad and a handful of golden fried potato chips which made my inner potato loving fat kid happy.  Clearly my healthy eating habits took a vacation for the day, but I loved every messy minute of it.

I have since purchased the Carolina sauce, which is so good it would make a shoe taste delicious, and have gone back to the restaurant several times to “get sauced” and indulge my  BBQ loving side.  If you ever find yourself in Neptune, heck even if you have to make a long trek across the country, make sure to stop into Local Smoke. I would most definitely walk 500 miles and 500 more for my 20 minutes of pork -a-palooza paradise from Local Smoke.

What other Biters are saying about Local Smoke:

“When Local Smoke took up residence only a few minutes from me in Neptune, I became intrigued. I’m pretty picky when it comes to BBQ. The first time I went there I shared an order of the ribs and the brisket – and I was blown away. The BBQ sauce is not too sweet and not too spicy and the ribs were fall off the bone. I’m now a huge fan of their appetizers including the slow-smoked jalapeno poppers, my favorite! Also, be sure to get a side of their BBQ baked beans! Great food and great people!”

“I have to say, I went here on Saturday after the lengthy discussion about it through the group and I was thoroughly impressed. I, too, had the pulled pork sandwich with Carolina sauce. Perfect texture and consistency, perfect meat-to-bun ratio, and a sturdy bun that maintained its integrity despite the juicy, saucy meat. I love how the Carolina sauce was vinegary but pretty uniquely sweet and smoky. Thanks for the great recommendation, all!”

Christine Van Arsdalen is a born and raised Jersey Girl; native to central and Costal NJ. As the author of the blog the Dexterous Diner, Christine chronicles her efforts as she indulges her foodie side on her very small budget which she likes to call “champagne dining on a beer budget”. She grew up being yelled at by an old Italian woman in the kitchen who was surprisingly not her mother. Her love of food grew from a combination of cooking in a restaurant and fond memories of creating scrumptious meals from scratch with her father. Today she travels around the state of New Jersey and beyond searching for new twists on her old favorites; foods that bring you back to your childhood in a modern and sophisticated way. She loves unexpected and creative combinations, both in the food she eats and cooks. Though her palate has become more refined, she is still excited by a grilled cheese sandwich; that, and a great cup of coffee.