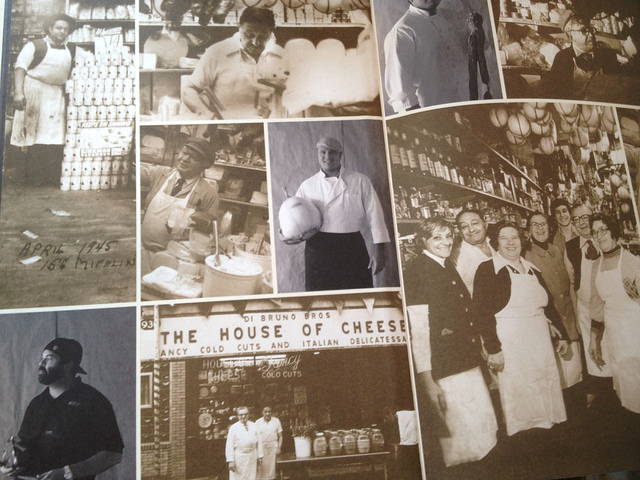 Author Tenaya Darlington’s new book about DiBruno Bros., the cheese mongers extraordinaire located just over the bridge in Philadelphia, and one of the ” go to” places for anything cheese in South Jersey has graciously allowed JerseyBites readers first dibs on an all-about-cheese interview. Tenaya A.K.A. Madame Fromage Madamefromageblog.com is a transplant from Wisconsin (a Cheddar Head) just a few years ago, who thought she knew a few things about curds.

From the moment she entered Di Bruno Bros. and caught a glimpse of their intimidating assortment of cheeses and tasted that first silky spoonful of Roquefort she was hooked and knew this was her calling. After a year of chronicling her visits and every taste at the urging of her friends, she began to blog and became the resident freelance cheese blogger for DiBruno Bros. It was a perfect time to talk cheese as a nationwide renaissance  was just beginning to make the news! Di Bruno Bros. House of Cheese a Guide to Wedges, Recipes, and Pairings is a must read for cheese heads and everyone else who just loves cheese. This book demystifies all the varieties and how to pick and serve it along with some scrumptious recipes! Tenaya is to cheese what a sommelier is to wine.

Here is a little taste of what’s inside her new book. I am going to curl up and read the rest of her book which reads like a fine novel, think along the line of Toujour Provence, Like Water For Chocolate and dream of far away places and cheese!

How to build a cheese board

Don’t fret. Building a cheese board is like creating a costume.Pick one statement cheese that’s got a dramatic surface (like a cheese wrapped in leaves), then fill in with an oozy triple creme and one firm hunk. Add some fresh fruit or honey, some olives, and some cured meat. Then step back and let your friends play with pairings.

How to talk to a cheesemonge

Cheesemongers are like rangers: they want to help you through the wilderness. Don’t be afraid to put yourself in their hands. Ask them about the last cheese they took home, and that will be a good guide to what’s delicious. If you’re planning a special event or working within a budget, let them know so they can work with you. I always like to ask “what’s ripe?” That always makes a cheesemonger’s eyes light up.

What was the first cheese you fell in love with?

Carles Roquefort. It’s made by a cheesemaker who is in his nineties, Jacques Carles, and it tasted unlike any other blue I’d ever experienced. Like flint and spinach, with a kick of wasabi on the finish. It was so spicy, it made me cry. I’d never eaten a cheese that complex; it was like scuba diving through layers of flavor.

What cheese to you give to someone who is not particularly a fan of cheese?

Midnight Moon. It’s a goat Gouda, basically, but it tastes like candy corns. No one who eats it ever believes that it’s made from goat’s milk.

Is there a cheese you haven’t tried that you’d like to try?

Hmmm…I’ve heard about a firm Italian cheese that’s wrapped in tobacco leaves. I’d love to try the that.

If you could only eat one more hunk of cheese, which would it be?

Probably a wedge of Raclette. I grew up eating Raclette with my Swiss grandparents, and I love the smell of it, even though it’s pretty stinky. I’d melt it over boiled potatoes and pearl onions with plenty of cured ham and pickled gherkins on the side. That’s my favorite meal.

I love a salty blue, like Point Reyes Blue, and a rich stout. When it comes to fruit, I love eating pineapple slices topped with Gorgonzola Dolce.

What is your favorite recipe from the book?

What is your go-to cheese board?

Whatever I have in the fridge (usually a bold blue, a cloth-bound Cheddar, and one stinker — like Taleggio) with a jar of chutney, some walnuts, and a little dark chocolate.

Can you give cheese storage tips?

Use waxed paper instead of plastic wrap to cover firm cheeses. Unwrap soft cheeses and put them in a glass container — I use Ball jars as cheese domes in the fridge.

What should we do with leftover rinds?

Save them and use them to flavor broth (as long as they aren’t covered in wax). You can just toss them into your stock pot, then fish them out before you serve the soup. Parm rinds work best.

Velveeta. But then, everyone knows that’s not really cheese.