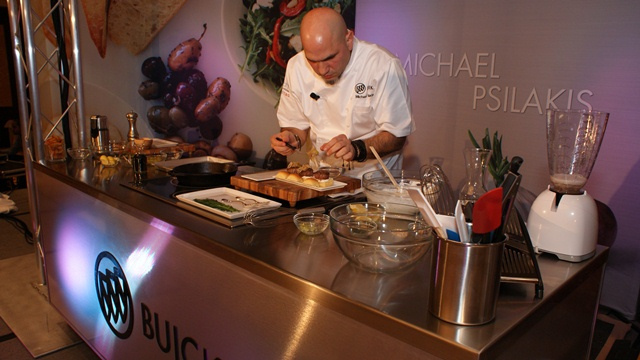 As close as we are to Manhattan, it can sometimes be daunting to choose a restaurant when heading into the city for an evening or, as happens often, out-of-towners send frantic pleas for recommendations on where to eat while they’re in town. It’s great, then, to have the chance to sample the artistry of NYC chefs right here in Jersey when they bring their show on the road. In the case of the Buick Discovery Tour, they’re quite literally doing just that.

Motoring through Morristown on a recent weekend, the Discovery Tour – co-hosted by Buick and Food & Wine magazine – featured celebrity and up-and-coming chefs, an irreverent wine expert, and delectable samples of food, drink, and drive (not necessarily in that order). It’s an interesting concept, pairing the foodie experience with that of test driving glossy new cars with heated steering wheels and less than 100 miles on the odometer. The goal of the sponsors is to create an experience and perhaps inspire an ah-ha moment next time you venture out to buy a car. The event promoted the theme of “new discoveries” and offered a great opportunity to learn about cooking techniques, specialty ingredients, flavor palettes, and the personal stories behind award-winning culinary stars.

Manhattan-based chefs Michael Psilakis, owner of several modern Greek restaurants—including Kefi and FISHTAG, both on the Upper West Side—and George Mendes, owner of Aldea, which puts a new-millennium twist on Portuguese cuisine, were on hand to demonstrate simple dishes that can easily translate to make-at-home meals you can present with flavor and flair. Here are the recipes they’ve shared with us at JerseyBites, courtesy of the Buick team: 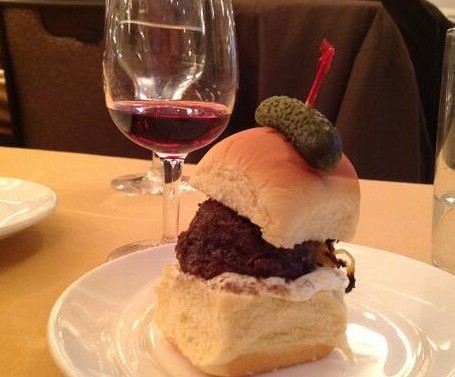 Combine all spices in mixing bowl, transfer to airtight container.

2. Make Tsatziki sauce & store in refrigerator until ready to use.

3. Preheat a large cast iron skillet on medium high heat and coat bottom of pan with

4. Season sliders on both sides with salt and pepper and dredge sliders in gyro

5. In small batches of 3-4 patties sear sliders for approximately 1 minute per side. Allow to rest once cooked.

6. Remove excess grease with paper towel and repeat until all sliders are cooked.

7. To serve, place each slider on bottom of potato roll and top with dollop of Tsatziki

sauce and cover gently with bun top and cornichon. Spear with toothpick.

1. Cut the cucumber into very small pieces, even dice. Transfer to a mixing bowl.

2. In a food processor, combine the garlic, vinegar, shallots, and dill. Pulse until finely

chopped, but not pureed.

3. Add the mixture to the cucumbers; add the yogurt. Fold together with a rubber

4. Season liberally with kosher salt and pepper, starting off with 1 tablespoon salt.

5. You can store the Tsatziki in a covered, clean jar in the refrigerator for up to one week.

Preheat oven to 200°F. Place the olives on a parchment paper-lined sheet pan and bake until totally dried and easy to crumble. Alternatively, use a dehydrator set at 145°F. Cool completely, then mince. You should have 2 tablespoons.

Fill a small saucepan with canola oil to a depth of 2 inches. Heat to 375°F. Add the potatoes in batches to fry until golden brown and crisp, adjusting the heat to maintain the temperature and gently stirring to cook evenly. Drain on paper towels.

Break the eggs into a small bowl and whisk until blended. Reserve.

Heat a medium nonstick pan over low heat and coat with the olive oil. Add the onion and garlic and sweat, stirring occasionally, until translucent. Add the flaked cod and cook for 15 seconds, stirring, then add the beaten egg and a few strokes of white pepper. Cook, stirring constantly, until just set but still wet. Fold in the parsley, lemon juice, add the olives and potatoes.

Meeting and sampling the work of these two chefs was a terrific new discovery, and visiting their restaurants for the full experience of each one’s updated takes on their culinary ethnic heritages is something I eagerly look forward to. Alas, I’ll be chugging into the city on a swaying NJTransit rust bucket rather than in a luxury sedan, but I’ll always have the delicious memories. Thanks, Buick!

For a full recap of the event, check out JerseyBites editor Veronique Deblois’ post over at foodandwinechickie.com.