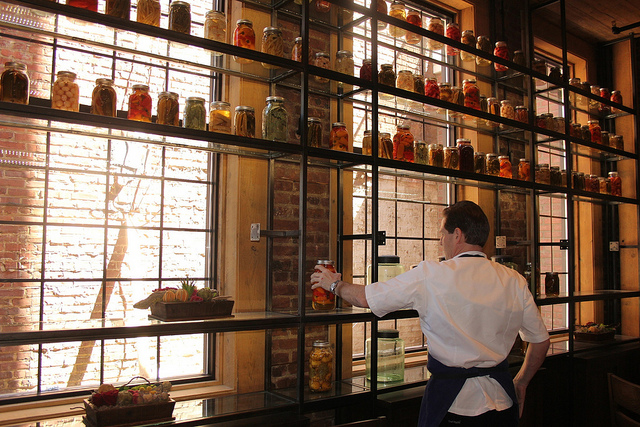 About the Chef and the Concept

Agricola has only been open for a little more than a month and the menu has already been updated. Something to get used to when the owner also lives on the farm–four miles door-to-door–from where the produce is grown. Even though the menu reflects the first spring bounty from the 112-acre Great Road farm where owner Jim Nawn lives, the entire restaurant revolves around the chef, the farmer and the local ingredients.

“I’m looking for food that I cook at home – simple, wholesome, seasonal,” said Executive Chef and Partner Josh Thomsen. “If I put a pineapple or a lobster on the menu, it’s not coming from five minutes away from here; golden pineapples come from Maui and lobster comes from Maine. I just put Cape May scallops on the menu, which are so exciting because having cooked in California all these years, scallops were flown 3,000 miles for me.”

The farm vegetables play a key role not only on the menu, but in the decor. The walls of the restaurant are lined with large mason jars of pickled vegetables of all colors, shapes and sizes that act like stained glass, reflecting colored light on the rooms. The vegetables also play key roles at the bar, both in the signature cocktail, the Great ‘Dirt’ Road Farm Martini, which comes with a sidecar of pickled vegetables and a pickle plate on the Small Bites menu.

Chef Thomsen’s impressive resume shows time at the French Laundry in the Napa Valley under Thomas Keller and opening chef of Tao in Las Vegas, which became the highest grossing restaurant in the country during his two-year tenure.

To help him in the kitchen, Chef Thomsen, who in his sixth grade yearbook listed chef as his career choice, brought his Chef de Cuisine of four years, Manlee Siu, with him from California and hired pastry chef Sarah Hecksteden from the Little Inn at Washington.

Chef Thomsen inherited his love of cooking from his father, whom he calls a closet chef. “He worked in finance, my mother is a great cook in her own right, but it just wasn’t her thing,” he said. “I remember growing up where it would be 10 o’clock at night and she’d be doing dishes. Dad made a mess, he just destroyed the kitchen. He loved to cook, he got done with work in the finance business and then ripped out pages of Bon Appetit or Gourmet, went shopping and came home and cooked a gourmet meal for us. I fell in love with it.”

Restauranteur Jim Nawn, a culinary school graduate who used to own more than 35 Panera Bread locations, always wanted to be in hospitality and was excited about the challenge the historic space of the former Lahiere’s posed. Lahiere’s was a family-owned French and contemporary American restaurant that had been in business for 91 years at the 5-13 Witherspoon Street location.

“A lot of small things came together, I sold my Panera business (in September 2010),” said Mr. Nawn, who originally bought the farm to supply his local Panera locations with fresh produce. “I came to the conclusion that getting back into hospitality was for me.”

To get back into the hospitality business, he went to culinary school at the Institute for Culinary Education in New York City, and while there, the Lahiere’s space became available. “The thought crossed my mind, but I wanted to finish culinary school,” he said. “While I was doing that, this space remained available.”

Since Lahiere’s space seemed to be waiting for him and he wanted to open a local restaurant, Mr. Nawn took on the challenge.

“This space was intriguing, it’s a big bet,” said Mr. Nawn. “It’s on center stage (in the heart of downtown Princeton on Witherspoon Street), it’s costly to be here and the space is large.”

The star of the kitchen stage is Chef Thomsen, who performs every night in the open kitchen for people to watch from the restaurant or the windows on Witherspoon Street. Both he and Mr. Nawn are respectful of what their historic space means for the community and patrons, who had been sitting at the tables for almost a century before they took it over.

“This space means a lot, not just to Jim, but the community at large,” said Chef Thomsen. “I’ve met so many people who are in their eighties, seventies and sixties and fifties and forties who have all eaten here at one time or another when it was Lahiere’s. I had one couple in their eighties that sat in the kitchen, they were sitting in the area where they always sat when they came in for years.”

Mr. Nawn hired Chef Thomsen seven months before the restaurant opened and the chef was instrumental in the design of the restaurant.

“I even moved the kitchen,” said Chef Thomsen. “When I came out (for a weekend) to meet Jim, he opened up the front door and said ‘don’t walk in,’ if I had walked in, I would have fallen 20 feet to the basement, there was nothing here. The kitchen was designed much like the old kitchen was. Everything was torn out and it was a blank canvas, but it was being rebuilt with exactly the same structure the way it was.”

Not officially hired yet, he didn’t think anything of the kitchen design, which was a French brigade system. After visits to New York and California by both parties, they reached an agreement and Chef Thomsen requested to move the kitchen.

“I don’t think the kitchen should be in the back,” he said, noting with the total gutting of the space they had the chance to put it anywhere they wanted. “I wanted to move it to the front, which was originally one of the dining rooms. I’ve been doing this so long I’m tired of working in a dark room, but I want to see. I’m going to live here, I want to see light, and on top of it, you’re going to get to show people things they’ve never seen. People love to look in a kitchen.”

The kitchen design evolved into an L-shape and a wood-fired oven was added in addition to a chef’s table.

“It’s been a blast, people get the biggest kick out of it!” said Chef Thomsen, who is a graduate of the Culinary Institute of America. “We have people takings pictures, it’s crazy!”

Agricola – About the Food

I recently had the opportunity to dine at the then thirteen day-old Agricola in lovely Princeton.

I follow Agricola on Facebook and saw the step-by-step creation of the beautiful space. By the time the doors opened, I felt like I had been part of the process and was eager to make my way down to Princeton.

The design is simple, comfortable and welcoming. After sampling Chef/Partner Josh Thomsen’s dishes, I find the food mirrors the décor. The New Jersey native returns to his home state to wow diners with the skills and techniques he has amassed along the way.

The 160-seat restaurant features five distinct dining areas. To my delight, my party and I were seated in the room right off the kitchen where I enjoyed watching Chef Thomsen and his staff work in unison to create memorable meals. With less than two weeks under its belt, Agricola’s kitchen appears to be running like a well-oiled machine.

The menu at Agricola is seasonal, local and flavorful.

Our meal began with Atlantic Cod Fritters ($12), the Coach Farm Goat Cheese – Potato Terrine ($12) and the Octopus “A La Plancha” ($13). The fritters are expertly fried to a perfectly crunchy exterior and a moist interior. The dish is served with oven-dried tomatoes, shaved fennel and flat leaf parsley. The terrine showcases roasted beets, micro arugula and balsamic syrup was as delicious as it was beautiful. The ultra-tender octopus is served with pickled cauliflower, bell pepper, black garlic and toasted almonds – a real winner.

The chicken was a gorgeous golden brown and served with Tuscan fried potatoes, sautéed farm greens and green olive-fennel tapenade. The melt-in-your-mouth short ribs are smartly paired with spring vegetables and arrowleaf spinach. The flatbread we ordered was topped with spring onion, pea tendrils and Mozzarella. There is another flatbread that I would like to order on my next visit that is topped with wild mushrooms and a farm-fresh egg.

Desserts we enjoyed were the Meyer Lemon Cheesecake ($9), the Mixed Berry Cobbler Skillet Cake ($9) and an Artisan Cheeseboard ($15) featuring the amazing cheeses of Valley Sheppard Creamery and served with Tassot Farms honeycomb, pear-pepper chutney and house-made crackers. The cheesecake is served with huckleberries and sprinkled with vanilla salt. The cobbler is presented in a cast iron pan topped with crème fraîche ice cream.

The “libations” list offers an extensive array of whiskeys, craft beers and wines, both by the glass and bottle. I appreciate and tip my hat to whoever created the wine list. It is eclectic and interesting with affordable options and unusual gems.

The restaurant describes what it aims to be as “a community eatery where friends gather over dinner, where wine glasses toast to milestones, and where families savor Sunday brunch and time together”. In the short time it has been opened, Agricola provided this type of experience.

Brunch and Lunch: To Begin in April

Victoria Hurley-Schubert, Regional Editor Ocean County, is a true Jersey girl. Raised in Marlboro, Vikki  has lived in the area her whole life. She loves to experiment in the kitchen and is happiest when feeding a houseful of friends and family. A journalist for 10 years, she now serves as media coordinator at the Princeton Regional Chamber of Commerce. Vikki is happiest on the road, so it should be no Surprise she is a travel agent specializing in Disney destinations.   Follow her on Twitter @vikkihs.

Veronique Deblois, Food & Wine Chickie: Veronique is a food and wine writer based in Morris County, NJ. As the author of the popular blog, Food & Wine Chickie Insider, Veronique shares recipes, wine and restaurant reviews and insight into the travel industry of which she’s a 15-year veteran. Follow Veronique on Twitter or like her Facebook page.