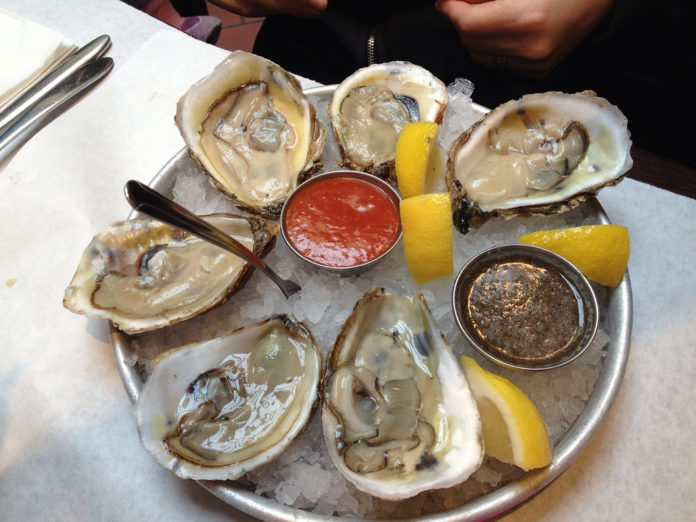 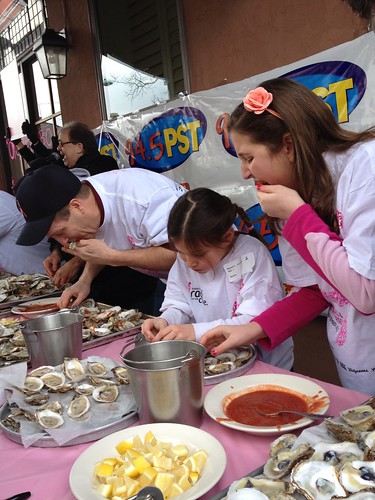 There was the shuck and chuck, the delicate pick and dip and the hunch and slurp. Contestants dribbled cocktail sauce, squeezed fist fulls of lemon and even splashed soy sauce on oysters by the sheet pan at the 14th Annual Oyster Bowl at the Blue Point Grill in Princeton on Sunday.

The Oyster Bowl, an oyster eating contest held on Superbowl Sunday, has raised $220,000 for Susan G. Komen for the Cure Central and Southern New Jersey since its inception in 1999.

“We have seen many techniques… Scooping up many oyster meats and slamming them back with a handful of cocktail sauce,” said Jack Morrison, owner of Blue Point Grill. “I also like the guys that bring the candelabra, a great Chardonnay and slowly slurp a half dozen. The ponzu idea was cool.”

This year’s winner, Dave Wittenburg, ate 93 oysters in the allotted 2 minutes and won an all-inclusive trip for two to the Caribbean courtesy of WPST and Nassau Broadcasting Partners.

Trevor Lamb came in 2nd with 88 and 2012 champ Lizzy McDaniel came in third with 85. To date, the oyster eating record was set in 2009 with 102 oysters consumed in two minutes.

The contest has deeply personal roots for the Morrison family.

“When we opened the Blue Point Grill we wanted to align our business with a worthy cause; at the same time we had a very dear friend of ours diagnosed with breast cancer, thus Komen being a leader in the battle and local, it all made perfect sense and still does today,” said Mr. Morrison. “Our general manager, Steve Murray, was enamored by the wing bowl and came up with the idea (for Oyster Bowl.)” 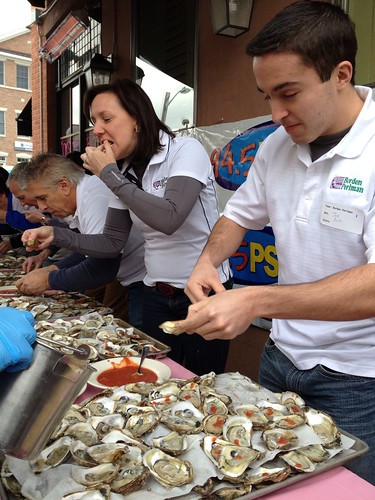 At this years bowl, volunteers shucked 7,500 oysters on February 3. This brings the total oysters shucked over the years to 70,000.

But, all the work is worthwhile when Mr. Morrison sees “all the friends, sponsors, community members, families, the volunteers who are past, present and future employees, wives, husbands, kids all coming out to make this the great event it has become.”

Oyster Bowl is also the one day of the year when Blue Point Grill serves lunch. I had a hearty bowl of New England Clam Chowder, which was tasty with lots of fresh herbs and very creamy and loaded with potatoes and clams, but not fishy.

A table mate ordered oysters on the half shell and declared them the best she had ever eaten, very fresh, smooth and not at all salty.  Another loved the shrimp po boy.

Even though it was a bit gross watching the oyster juice dribble down the contestants chins, it is a great day in Princeton for a great cause and I’m already looking forward to next years’ 15th Annual Oyster Bowl, which is even more special with the Superbowl coming to New Jersey.

Victoria Hurley-Schubert , Regional Editor Ocean County, is a true Jersey girl. Raised in Marlboro, Vikki  has lived in the area her whole life. She loves to experiment in the kitchen and is happiest when feeding a houseful of friends and family. A journalist for 10 years, she now serves on the staff of the Princeton Packet. Vikki is happiest on the road, so it should be no Surprise she is a travel agent specializing in Disney destinations.   Follow her on Twitter @vikkihs.