It’s not immediately apparent there is something different about this Voorhees pizzeria until you notice the TV set tuned to M Tunes Bollywood musicals and the Indian travel posters.

Brothers and partners, Sagar and Parag Poonawala, worked on Wall Street for several years but we’re looking for a different piece of the pie. They had long discussed running their own franchise but it wasn’t until during a trip to India that Parag tried the pizza served there and they thought, why not? “We always liked pizza but were use to a little more flavorful food than most American food,” explained Sagar.

After a few moments learning about Bombay Local Pizza‘s concept, a first-time customer couple enters the shop and their initial words are a familiar sound to the owners. “We’re new. What do we do?”

According to the Poonawalas, Bombay Local Pizza gets a mix of people somewhat familiar with Indian flavors and others just wanting to try something new. Sagar and Parag help them through the process with the most basic question first – how spicy do you like your food? There are options for every level of heat tolerance. The spiciness of the pizza is for the most part a slow burn, with the exception of the 4 Alarm pie topped with fresh cut “fiery” peppers.

All pizzas are cooked fresh to order. You can build to your level of comfort by upping the sauce from mild to spicy and then choosing your toppings. After sampling eight different varieties of pies, I was stuffed and my nose was running but there was no danger of losing my taste buds.

A nice intro to the signature pizzas is the Bombay Masala with mild sauce. With just mozzarella cheese you can really get a taste for the spiced sauce, which is slightly sweeter and tangier than traditional tomato sauce.  Go deeper into the fusion with one of my favorites of the day, the Chutney Paneer pie topped with mozzarella and paneer, a firm curd cheese that when baked has a meaty texture. The mint-coriander chutney lends a fresh taste to the cheese rich plate. The Samosa with spicy sauce recalls those fried pockets of potato and onion stuffing you can find on the menu of most Indian-American restaurants and the Baingan Bartha will be a favorite of eggplant bruschetta fans. 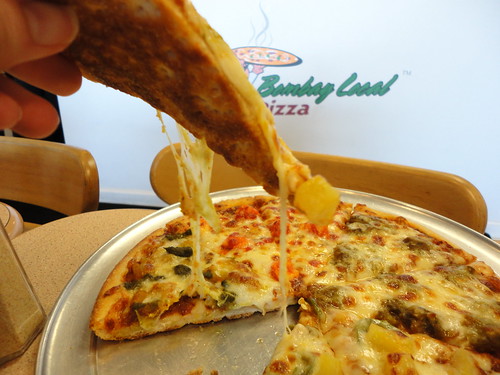 The other favorite of the day was the perfectly sweet and spicy Pineapple Jalapeno pie from the American Favorites menu. Layering the toppings between the sauce and cheese rather than laying them on the very top of the pizza allows the cheese to brown to a nice crispiness.

“We found people were very particular about the jalapenos under the cheese, especially. It cooks them through and adds the flavor to the sauce,” explained Parag.

Since its opening in September 2012, Bombay Local Pizza is growing its number of fans. The Poonawala brothers are concentrated on developing their brand, but keep an eye out for future development possibly in Edison later on. In the mean time, try your hand at answering their almost daily riddles for pizza deals via Facebook and stop by the South Jersey shop to expand your pizza horizons.

Are you a fan of fabulous food in New Jersey? Join other like-minded Jersey foodies on JerseyBites’ Facebook page where we dish about everything edible in the Garden State. –