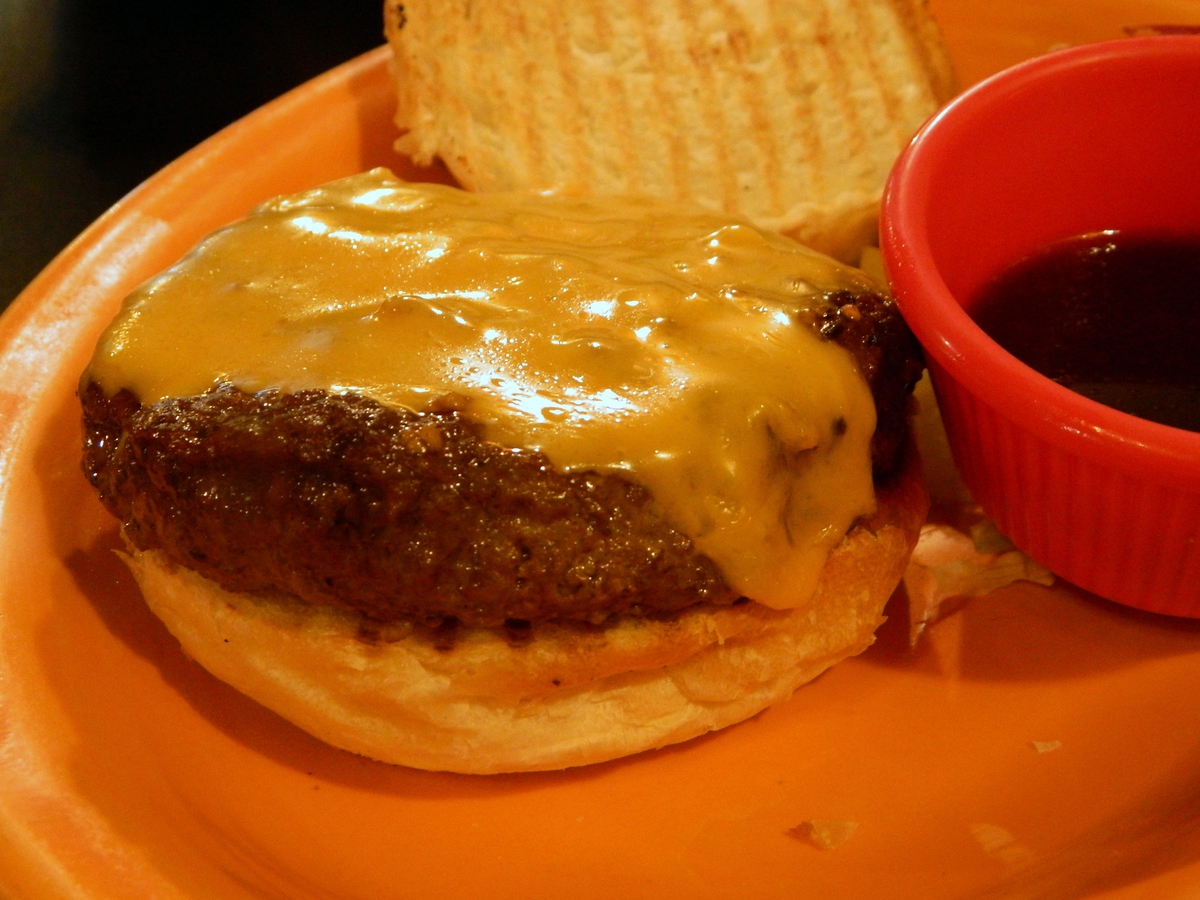 Seeing as this is my first time writing for Jersey Bites, I was thrilled when I found out that my first review would be of a burger place, as I am definitely a “burger authority.” Now I claim to have this authoritative status as someone who not only makes his own bacon jam and homemade chipotle ketchup, but someone who thinks an 80/20 burger mix will do in a pinch – apologize to your heart in advance and go with 70/30 and thank me later.

Beasty Burgers resides in No Joe’s Café. Established in 1993, No Joe’s is a java institution in Red Bank, NJ. The owner, Mike Tierney, has lovingly shaped this business and transformed it along the way to include fun and quirky breakfast and lunch items to satisfy any craving.

The Beasty Burgers concept is the brainchild by one of the most innovative chefs in the area, Michael Ross. After speaking with Mike, I learned that the unique Beasty Burger was created at his All Mixed Up eatery located in Ocean Township. The Beasty Burger quickly became a popular item on the menu, and became the official rock star – demanding encores on a daily basis by some local fans.

Mike and Mike share the storefront in Red Bank to minimize costs, divide responsibilities, and provide a unique offering to the customer. As Mike Tierney explained, there have been several famous business duos in the past that have worked incredibly well such as Baskin-Robbins and Dunkin’ Donuts and Kentucky Fried Chicken and Taco Bell. When the opportunity arose to combine these foodie forces, they both knew the future possibilities are endless.

Ok now on to the food. Let me start by saying that this was definitely one of the best burgers I have ever eaten. Now when I say burger, I don’t refer to a Wendy’s or McDonald’s or even a Five Guys (it can’t be a legit burger place in my opinion if you can only order your burger well done). I’m talking serious, artisan crafted burgers such as those at Basil T’s and the Fromagerie. The burgers at Beasty are simply divine. Mike Ross has perfected a new cooking process altogether for burgers. Each patty made of certified Angus beef is seared and individually pouched in au jus to remove any residual grease and bring out the meat’s natural juices. Beasty also serves them with an extra side of au jus – very French Dip esque. Also I was told that if you order the burger to go (they do deliver as well), they soak the patty in au jus topped with the ingredients of your choice and keep it separate from the toasted bun until you’re ready to eat; translation = no soggy bread. Just the fact that this much thought has been given to the prevention of a soggy bun makes this place legit.

Beasty Burgers also sets itself apart with its signature sauce – a delicious GSC (Guinness Sharp Cheddar) made with aged sharp cheddar cheese, shallots, and garlic. I’m a big fan of cheese sauce, but if the hands on the clock have not reached 2:00 a.m., my stomach normally can’t handle that fake neon orange ooze served at other establishments. The GSC at Beasty is truly a labor of love, and I suggest that you slather this on everything and anything until other patrons give you a look that you’ve gone too far. The thing that really stood out for me at Beasty besides the insanely delicious burger were the sides. Some of the sides I sampled were the sweet potato tater tots served with an Asian inspired Thai chili dipping sauce and the broccoli rabe with roasted garlic and long hot peppers. The tater tots were perfectly crispy and the sweetness of the sweet potato paired perfectly with the zinginess of the side sauce (I would have thrown a little Sriracha in there for some kick but that’s just me). The broccoli rabe was perfectly cooked and still retained its beautiful green color – but the dish is not for the faint of heart. The peppers are definitely hot and it took much restraint not to open the lid of my bun and add them to my burger. The one side that I was dying to try was the roasted brussels sprouts with apple wood smoked bacon. Unfortunately Beasty was out of sprouts that day, but I will be returning back soon during lunch to give them a whirl.

Some of the other sides on the menu include potato pierogies, fried plantains, fried green tomatoes, and rosemary finger potatoes. You’d be hard pressed to find another burger place with such an innovative supporting cast to the main star, the burger. The menu is also filled with delicious soups, salads, and made to order milk shakes.

Beasty Burgers is located in the Red Bank landmark No Joe’s Café at 51 Broad Street, Red Bank, NJ. The restaurant is usually adorned with paintings and photos of local artists – this place is funky in a good way – think Red Hook Brooklyn, only you’re not forced to wear skinny jeans and a beanie to enjoy one hell of a great burger.

No Joe’s Café and Beasty Burgers is open seven days-a-week from 8:00AM until 9:00PM. Also worth noting is that the place is BYOB. Whether a night out with the guys, the significant other, or the kiddies, Beasty caters to everyone and every palate. Happy eating!

Tom Paolella is a born and raised Jersey Boy who is 100% Sicilian (minus the Guido). Tom was raised in Belleville, NJ and moved to Old Bridge, NJ in sixth grade (still traveling up north for bread on weekends). His love for all things food began at an early age and his passion continues to this day. After receiving a B.A. in English Literature, with a Minor in Organizational Leadership from Rowan University, Tom found his calling and continued on at Rowan where he earned a M.A. in Corporate Public Relations. Tom previously lived in both Hoboken and Jersey City, while working in Manhattan. Tom handled PR for several Fortune 500 companies and currently holds the position as PR Manager for two local hospitals. A foodie by birth, Tom credits his mother for his love of eclectic cuisine from around the world and culinary chops in the kitchen. Tom lives in Middletown, NJ with his wife Jenn, son Aidan, and dog Bennie. When he’s not working or spending time with family, he enjoys experimenting with meals at home, relaxing on the beach, or attending classic car shows. Tom is a tough one to “wow” when out to eat and enjoys restaurants that go beyond the chicken, fish, and steak on the Specials menu. Tom can be reached at tomp5000@yahoo.com.