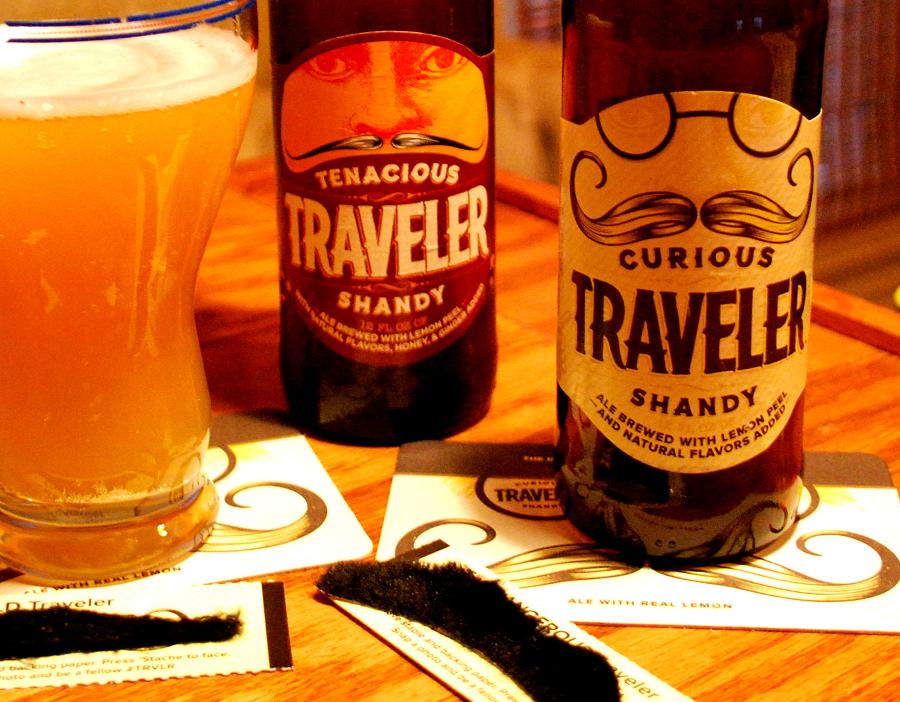 Shandy?  Really?  My first experience with the stuff was in the UK many years ago.  It was a mass produced lager mixed with a mass produced lemon-lime soda.  Umm, no thanks, I’ll take a pint of bitter please.  Unlike my dismal first experience, Alan Newman has a fonder memory of his first shandy.  His was in a small pub on a hot day and featured real ingredients.  It packed plenty of flavor and was refreshing too.  Now his concoction is available in New Jersey.

Who is Alan Newman?  We’ll get to that in a minute.  Let’s check out the beer first.

Right now, House of  Shandy offers two flavors: Curious Traveler and Tenacious Traveler.  I was convinced I wouldn’t like them.  I did.  Both shandys are based on a wheat ale.  Curious Traveler  is laden with lemon.  Think bitter lemon or lemon rind, not sweet lemonade.  It’s a bit cloudy which gives it a more “home made” feel than that lager and lemon-lime soda I mentioned earlier.  So is Tenacious, but it’s darker and laced with ginger and honey.  If you’ve ever had ginger beer and liked it, you’ll be right at home with this one.  The odd thing is that, as refreshing as they are, these aren’t just summer seasonals but translate well to autumn for me.   Especially Tenacious Traveler which reminds me of an old recipe for Ale Cup that I used to make at this time of year.  Indulge your curiosity!

One of the current trends on the craft scene is session beer.  Session beers are still flavorful but offer a lower alcohol content than your geeked out Double this or Imperial that.  At about 4%, shandy is a perfect session beer.  As Alan put it, “beer guys like to hang out in bars and socialize and you can’t hang out for 4 hours with 90 IBU IPA’s.”  Too true.  It’s also a nice entry point for the craft beer curious.  But Alan’s biggest surprise was how real beer geeks reacted to it.  “I thought they’d ‘bleep’ all over us”, he said “but they seem to love it.”  It looks like the timing was right.

Ok, back to this Alan Newman character.  He may have the coolest beer job in the country.  He’s a serial entrepreneur and the man at the helm of Alchemy and Science.  If you haven’t heard of it, Alchemy and Science is on a mission to “increase awareness of craft brewed beers by exploring and managing a broad range of opportunities, from creating and/or incubating new breweries to providing legacy solutions to craft beer/brewery founders.”  Kind of a beer think tank funded and backed by The Boston Beer Company (Sam Adams) and owner Jim Koch.  Sounds like fun doesn’t it?

So how do you get a sweet gig like that?  You become friends with Jim Koch, that’s how.  Ok, so how do you do that?  Simple.  You call him up and ask him if he’d like to go out and have a beer with you.   When Alan co-founded the pioneer craft beer brand, Magic Hat, they had some problems in the brewery.  Who better to seek for advice than the largest craft brewer in the country?  So he called Jim, talked for 5 hours over beers and they became friends.  Easy.  He kind of stumbled on to the beer business in the first place.  A good friend and trained French chef, Bob Johnson, was prone to throwing parties featuring top notch chow.  He also had a curious 3rd tap handle on his sink.  It was hooked up to a keg of home brew in his basement!  Turns out Bob was a talented brewer too.  So, Alan the serial entrepreneur built Bob a brewery to make his beer.  They’ve since sold Magic Hat and Bob is in the baking business now.  Alan was ready to open a potato chip factory when Mr. Koch called.  I guess it’s all about knowing the right people!

And now the Travelers have come to New Jersey.  Their names are Curious and Tenacious.  Get to know them because there are more coming this spring.  Get to know Alchemy and Science too.  More projects are in the works from them as well.  As I once said to a friend who was in a leadership position, “I’d follow you anywhere, if only out of curiosity.”  There’s nothing wrong with curiosity, unless you’re a cat.