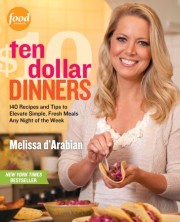 Melissa d’Arabian’s new book was sent to me this week for a quick review and yey!! GIVEAWAY!! We have two books to give away and a taste tested recipe below.

Raised by a single mother who was putting herself through college and medical school, Melissa d’Arabian grew up in Tucson, Arizona, with a coupon-cutter mentality and on a shoestring budget in a humble home where waste was never a temptation but where cooking together was a favorite pastime. After winning season five of  “The Next Food Network Star,” Melissa’s relatable cooking show “Ten Dollar Dinners” premiered on Food Network in August 2009.

Her debut cookbook offers 140 recipes divided into 11 chapters (Appetizers & Snacks, Soups, Salads, Pasta, Chicken, Fish & Seafood, Pork & Beef, Vegetables, Starchy Sides, Desserts, and even Breakfast).  Melissa also gives you all of her insider tips on strategies for saving and grocery store pricing. Her list of “must have” pantry items is also a great guide for stocking the essentials while they’re on sale.

Since the #2 strategy for saving is “Incorporate bean night once a week” I decided to tackle d’Arabian’s Black Bean “Nacho” Burgers. Now, I will admit, being the carnivore that I am, bean burgers have never been high on my “gotta have’em” list, but in the name of savings, I am proud to say, they will now be part of my regular meal line up.  Even my 14 year old son said they were delicious, and very, very filling. The recipe claims it makes 4 servings, but I think you could make the burgers smaller and serve 6. They are that filling. 1/2 cup salsa, plus extra for serving

1.  Use a food processor or potato masher to smash the beans in a large bowl until you have a rough-textured and chunky mixture with a few semi-whole beans left. Stir in the tortilla chips, salsa, cheese, egg, scallion, salt and pepper. Set the mixture aside for 10 minutes to allow the chips to absorb some of the liquid, then shape into 4 patties. 2. Place the patties on a plate, cover with plastic wrap, and refrigerate for at least 30 minutes or overnight.

3. Preheat the oven to 350%. Place the buns on a baking sheet and place in the oven until warm to the touch, 4 to 6 minutes. While the buns warm, heat 2 tablespoons of the oil in a large nonstick skillet over medium heat. Set the burgers in the pan and cook until golden brown, 4 to 5 minutes. Turn off the heat and serve the burgers topped with salsa and sour cream (if using) on the warmed buns.

You can also use fat free plain greek yogurt instead of sour cream. I recommend mixing the yogurt with the salsa and topping each burger, delicious and oh so healthy.

Ten Dollar Dinners goes on sale Tuesday, August 14th, and Melissa d’Arabian will be kicking off her cross-country book tour with a signing at Costco in Bridgewater, NJ (325 Promenade Blvd) at noon that day.

In honor of her debut Cookbook and the launch of her book tour, we are giving away two Free books for two lucky winners.

How To Enter: Just leave a comment with your email address in the comment section below. You can earn extra entries by Tweeting and/or Facebooking this Giveaway. Just be sure to come back and let us know you did so.