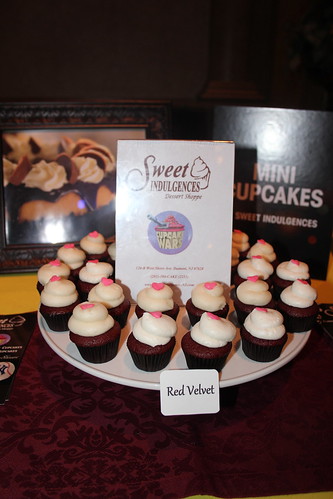 Sweet treats and many New Jersey bakers were on display at the Sweet & Stylish event at the Atlantic City Food & Wine Festival held at Ceasar’s Atlantic City Hotel & Resort.

The event also included a fashion show and lots of liquor samples. With my sweet tooth, I was in seventh heaven along with my friend and fellow foodie Michelle Maskaly, who is better known as “The Adirondack Chick.” 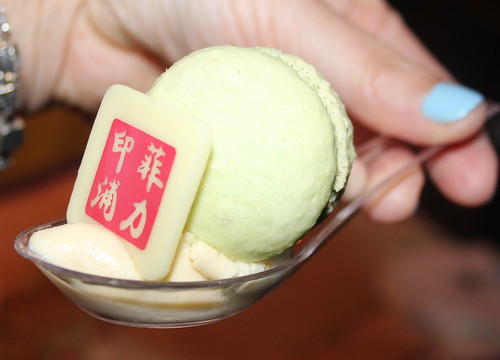 By far, our favorite dessert was a green tea meringue nestled in a pool of yuzu cream from Philippe Chin French Asian Bistro in Somers Point. Yuzu is a Japanese fruit that tastes very similar to a lime. The light and flaky cookie and fluffy creme was a zesty, tart and refreshing change from cupcakes and tarts offered by the other bakers.

Now, I’m not saying there’s anything wrong with cupcakes. After all, The House of Cupcakes–a Food Network Cupcake Wars winner–in Princeton was our sponsor for the weekend. Everyone knows I am a huge fan of their light and fluffy cake. I even discovered a new cupcake flavor of theirs to love-orange creamcicle.

Orange creamcicle seemed to be the flavor of the night with two of the liquor vendors offering samples of their orange alcohols. Licor 43’s Dreamsicle, made with the vanilla and citrus-flavored liquor, orange juice and milk, was very creamy and delicious with the dairy cutting the pungency of the alcohol itself. The second had a very strong alcohol flavor that overpowered the citrus and very little creaminess.

The cupcakes from Dumont-based Sweet Indulgences, also a Cupcake Wars competitor, were dense and had a bittersweet chocolate flavor.

Tonnie’s Mini’s, from Harlem, were a bit too moist and seemed a bit oily. But, Tonnie’s had the most beautiful display with a four-tier, ocean themed cake decorated with lots of intricate coral, starfish and sea creatures sculpted from multi-colored fondant.

My other favorite sweet of the night was also a bit savory. It was a chocolate heart with bacon by Nadia G., co-creator, writer and host of Cooking Channel’s “Nadia G’s Bitchin’ Kitchen.” Yes, bacon and chocolate. And it was amazing. The salt and the chocolate balanced beautifully.

One of the highlights of the night for Michelle, a former professional bar tender, was the Reposado tequila from the Sauza family’s Tres Generaciones. She really liked how smooth the premium blue agave liquor was because of its triple distillation and four months of aging in oak barrels, which made it very easy to drink on the rocks. 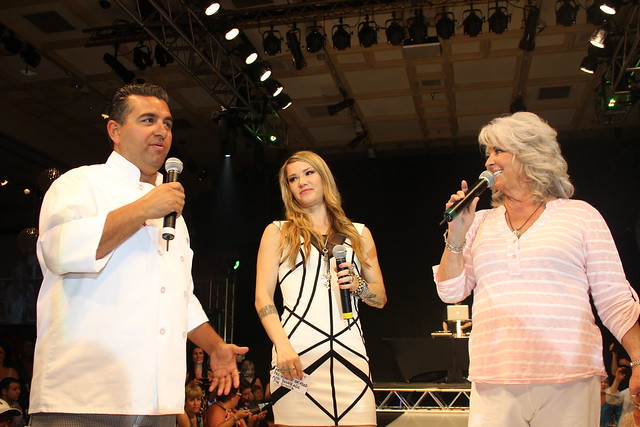 The fashion show was co-hosted by Nadia and Hoboken’s Buddy Valastro, of Carlos’s Bakery, which is featured on TLC’s “Cake Boss.” Nadia was right at home on the runway and did a fantastic job announcing the fashions from bebe, but Buddy seemed a little out of place, and compared the metal decorations on a dress to the draping of cake frosting. The highlight of the show was when the bakers got to strut their stuff on the catwalk and have the spotlight with a special guest appearance by Southern cuisine queen Paula Deen, who also loved Nadia’s bacon filled chocolate.

There were two downsides to the night, which cost $85 to attend from 8 to 11 p.m. First was the treats seemed to disappear very quickly. At least a couple of booths, including House of Cupcakes and South River-based 2 Chicks with Chocolate, were cleaned out within the first hour. Second, the music was very, very loud to the point where conversation with the bakers and other guests was difficult.

For more yummy pictures of the event, check out the slide show.

Victoria Hurley-Schubert, Regional Editor Ocean County, is a true Jersey girl. Raised in Marlboro, Vikki  has lived in the area her whole life. She loves to experiment in the kitchen and is happiest when feeding a houseful of friends and family. A journalist for 10 years, she now serves as Events Coordinator for the Princeton Regional Chamber of Commerce. Vikki is happiest on the road, so it should be no Surprise she is a travel agent specializing in Disney destinations.   Follow her on Twitter @vikkihs.