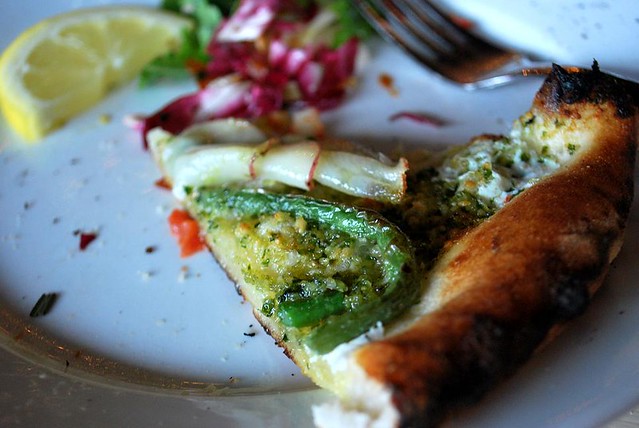 For months now I’ve been hearing about Porta in Asbury Park. Every time the topic of new restaurants pops up, people can’t stop raving about Porta. Have you been to Porta? Oh, you have to try Porta. Porta, Porta, Porta.

So, finally I made it to Porta. And, you know what, you have to try Porta. 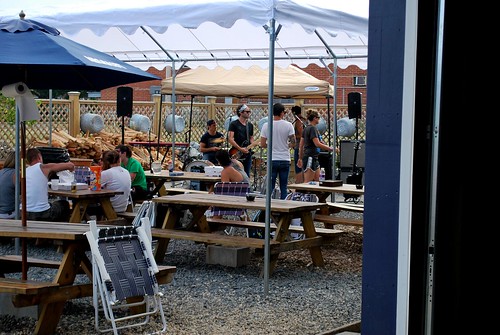 We sauntered in at our usual early bird arrival time (I hate crowds, and natural light makes for the best food photos. And, yes, I saunter, got a problem with that?)

Truthfully, I had no idea what to expect. On their website (which is one of the coolest restaurant websites I’ve ever seen and wins big kudos from me for the lack of auto-load music.) I read about this mysterious “Porta National Park.” At first I thought it was some park in Italy that they had adopted as a charity or something. But no, nothing that altruistic is going on here. Porta National Park is what they call the sandy picnic area where casual groups gather to listen to bands, play Jenga (as I witnessed) enjoy great pizza and drinks from the park bars. 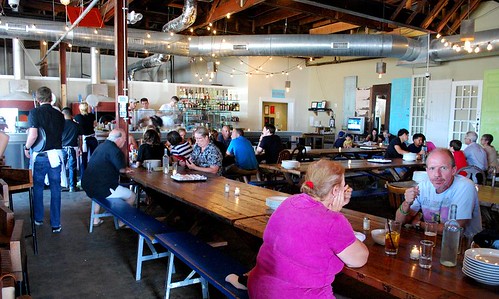 Inside, the casual atmosphere continues with more picnic style tables, rustic cement floors, and old wooden doors (Porta means door in Italian if you haven’t figured that out.) of varying shapes and sizes covering the far wall of the main dining room. The pizza ovens which came all the way from Italy to serve up their perfect pizza, are open to the room and tended by a flurry of mostly men who are very entertaining to watch. There was one female, however, braving the fiery heat, Fredrica Vilardi, Porta’s Head Pizzaiola.

As is my usual modus operandi, I set up camp at the bar with my back to the three garage doors which were open wide that day delivering a glorious breeze and aforementioned natural light for my photos. The bartender, Chris, was a very helpful young man whom we came to rely on for information about the food, the drinks, and the building.  My first question was “Where’s the Kale salad I’ve been hearing so much about?”  It was one of those tips that I couldn’t wait to follow up on, and then nothing, nada, no Kale anywhere. Chris explained that Yes, it is delicious and No, its not on the menu again until the Fall. Boo. 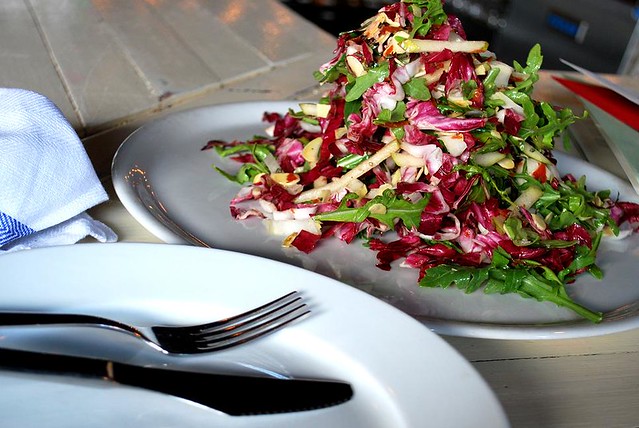 So, upon his recommendation we ordered the Three Trees salad (radicchio, Belgian endive and arugula with roasted prosciutto, toasted almonds, pear, rosemary-shallot vinaigrette) and in this case, the salad tastes a lot like the name implies. Let’s just say, its very healthy. As my dining companion said, “tastes like someone did a bit of foraging for the ingredients.” I don’t think that is the case, but it was a tad too rustic for me. Didn’t you say 3 Cheese Salad?  I needed to sprinkle some parmesan cheese on it because as we all know trees taste better with Parmesan cheese. Doesn’t everything?

After we finished chewing (and chewing) our greens, we were on to choosing which pizza to order. While they have a few tantalizing pasta dishes on the menu, we were there for one purpose, Porta’s pizza. Again, back to Chris for his recommendation since we couldn’t order one of everything, right? His first suggestion was the Betty Pie with San Marzano tomatoes, fresh mozzarella, goat cheese, sliced heirloom tomatoes,extra virgin olive oil, garlic, thyme. Since I think goat cheese makes everything better (even trees mind you) the Betty Pie was a very easy sell. But, I didn’t want to stop at just one pizza. In the name of next day leftovers I can rationalize anything, but the next pizza sugestion didn’t “Wow” me. Chris was telling us that the Pesto Pizza was his favorite. Basil pesto, potatoes, green beans, fresh mozzarella, and coarse sea salt. “Really? potatoes and green beans?” I asked with a face that looked like it just ate a lemon. I was met with a “trust me, you’ll love it.” So, being the typical sucker for young, cute guys who say “trust me” we ordered the Pesto Pizza. 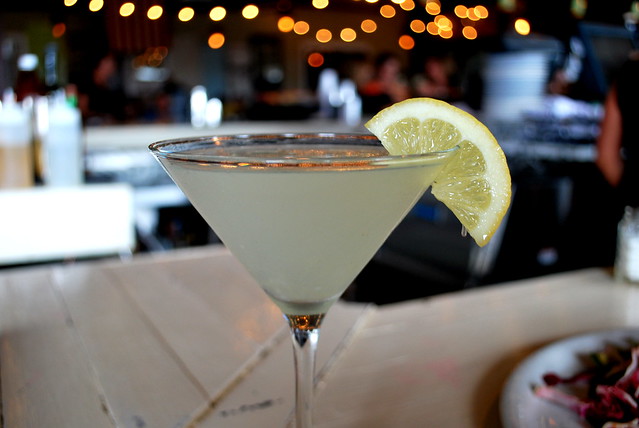 While we waited for our pizza to get built and then baked in the 900 degree oven, (I honestly have no idea how hot the ovens are, and I’m enjoying a cocktail, so work with me.)  I decided to try one of their signature cocktails. I’m not much of a cocktail lover. Most of them are too sweet for my liking, but the Limoncello caught my eye with fresh squeezed lemon juice, Absolut vodka, and simple syrup. Very little simple syrup, it was quite tart and deliciously fresh. As we sipped our drinks we watched all the entertaining scenes unfold in front of us; pizza bakers, patrons piling in to gather at the long communal tables, the bar filling up with sun bathers filtering in off the beach and the band starting to crank up in the park, and that fabulous breeze wafting in through the open doors.  “Wow, I could sit here all night.” The bar is a large U shaped structure made from the wood they removed from the ceiling during renovations. It’s very rustic and “beachy,” white washed and worn. Porta is a very casual place, but you can come in dressed up for a night on the town without feeling strange. I imagine the place has a night life of its own as it had been a number of different night clubs before Porta moved in.

And then the pizza arrived. 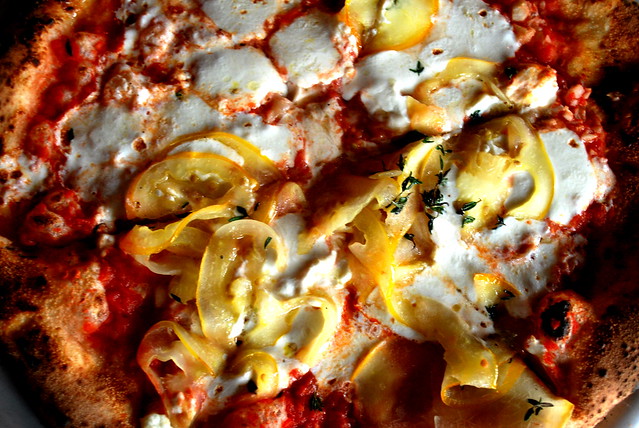 All I have to say is that I feel sorry for the guy who has to slice tomatoes with a Mandoline. 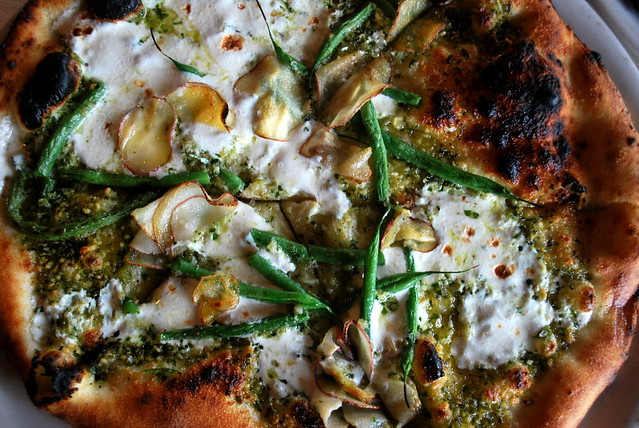 As you can see from the pictures, these babies are beautiful. Surprisingly, the pizza I had turned my nose up to turned out to the be the favorite of the night. The potatoes are shaved so thinly you can see through them and the green beans add the crunch that the pizza crust does not offer. But, lets talk about the crust. Chewy, a little sweet and oh so satisfying. You will not be leaving this crust on the plate. It is obvious that Porta invests in its ingredients. Both pies were just dreamy, and I can’t wait to go back to try the rest.

Oh, did I mention I could sit there all night? But, dammit, we had to go. We were headed to an opening of an art show around the corner so it was time to leave. (not without our leftovers of course). As we sauntered out (there I go again) through Porta National Park, we stopped to take it all in. Just then, a group of hungry marauders descended on the park. You never know what is going to happen at Porta. Turns out Pirates like pizza too. 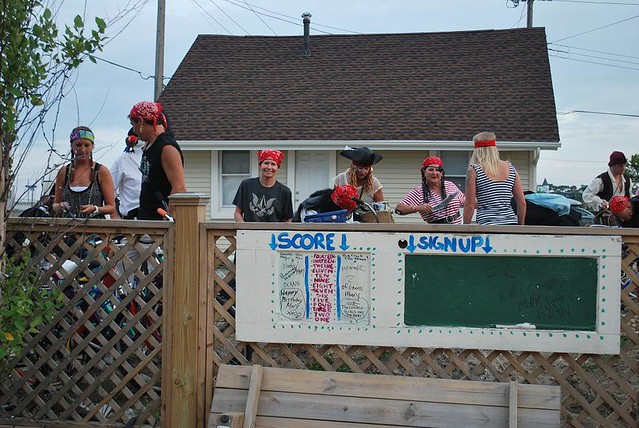