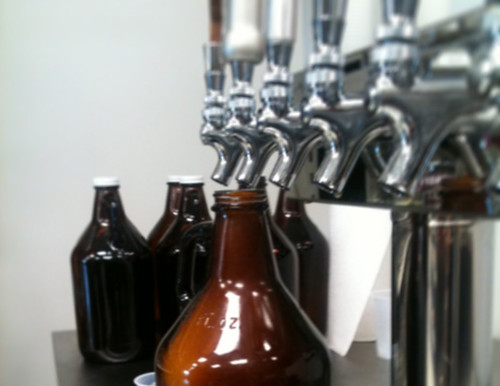 Growlers.  Love ‘em or hate ‘em?  64 ounces of freshly tapped beer in an awkward bottle that you pretty much have to drink in a day or two isn’t always the most convenient way to enjoy your favorite libation.  Yet growler stations are popping up all over the Garden State.  Even I have a growler that I get filled from time to time.  But why?

Well, I think Frank Helmka, who recently opened Shrewsbury Wine and Liquors at 230 Shrewsbury Plaza, knows why.  My buddy John, a wine salesman by day and beer geek by night, suggested I talk to Frank at his new retail store which opened with 16 Growler stations.  Sixteen?  When I asked Frank why he chose to start off with 16 taps, he replied, “I was intrigued.”  Ah, and therein lies the answer.

Frank insisted that I sample a couple of beers while we chatted.  I hadn’t had the chance to try Kane’s Cloud Cover yet so I had a sip of that and ended up taking home a 32 ounce growler of it (they carry both 64 and 32 oz. growlers).  Almost on cue, a young guy wandered in, having seen the taps through the window.  He was, well, intrigued.  Frank asked what kind of beer he liked, to which the kid replied, “I don’t know.  Lager I guess.”  After fifteen minutes of trying a sip of this and a sip of that, our lager lover walked out with a growler of Carton 077XX IPA.  A new craft beer convert was born with a pledge that he was going to tell all his buddies about it too.  The novelty paid off. 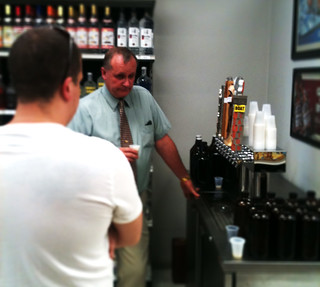 The growler station promotes conversation which leads to interest, then to a sample and finally, epiphany.  When I mentioned his ample sample policy, Frank explained, “I don’t want someone to walk out of here with a growler of beer that they don’t like and end up thinking about me the whole time they’re drinking it.”  A quotable quote if ever there was one.

With so many small, draft only brewers popping up, growlers are the only way to enjoy those beers in the comfort of your own home.  When you crack the cap on 64 ounces of double IPA, you aren’t going anywhere!  For me, if I can get it readily in a six pack, then I don’t bother with the growler.  True, beer out of the keg is going to be fresher than from out of a bottle but that changes fast when the tap handle is pulled.  Growlers expose beer to oxygen and that is going to neutralize that fresh beer taste in a day or two.  It’s rare to find a place that purges with CO2 before filling a growler but, even then, once the cap comes off it starts oxidizing. When you start tasting that wet cardboard flavor, your beer has oxidized and it’s all over.

Your growler is refillable which is good for the environment.  You’d better make sure you keep the environment inside that growler nice and clean.  Rinse it out with hot water as soon as you’re done with the beer and you’ll be fine (wash the cap too and leave it off the bottle).  If you don’t you’ll need sanitizer and a nylon brush.  No wire though, that will make scratches which bacteria love to hang out in.  Some local retail stores, such as my local Spirits, will sanitize your growler if it gets a little funky but don’t count on that.

So, growler stations are a great way for retailers to engage their customers and introduce them to new flavors.  Consumers get to test drive before they buy and have access to beers that don’t come in six packs.  With just a little extra effort, you too can experience the power of the growler.  I think it’s worth it.