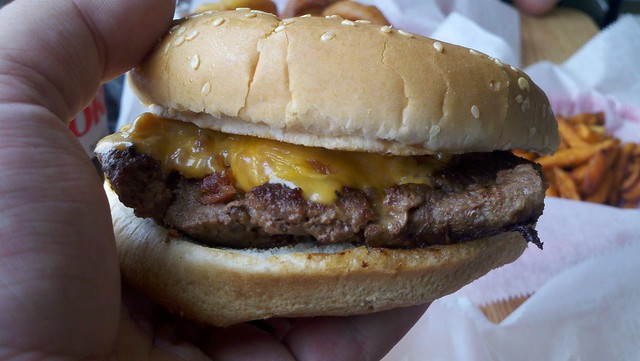 Its National Burger Month, and we’re celebrating at Jersey Bites by picking out some of our favorite burgers. I may have gone to a place famous for its Italian-style hot dogs, but I found one giant burger! 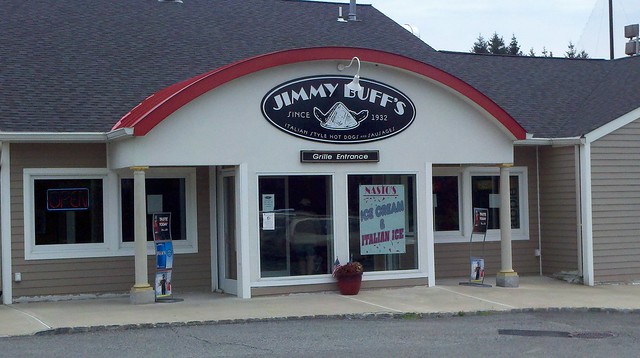 Jimmy Buff’s is a retro-themed burger and hotdog joint. They’ve got 5 locations throughout North Jersey. For the purposes of this review, I visited both the East Hanover and Randolph Locations. 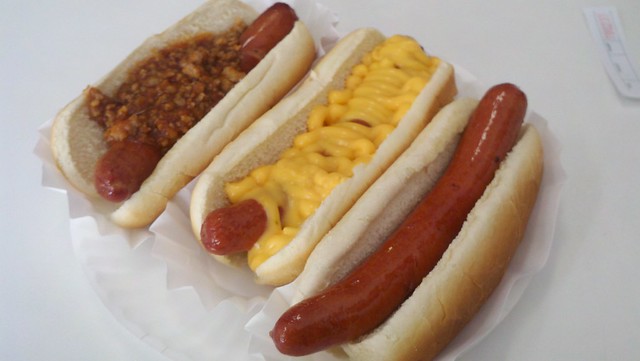 Before I get into the giant burgers and Italian-style dogs which are Jimmy Buff’s specialty, let me assure you that you can also order regular-sized burgers and dogs! I was really happy with how everything was priced, too. In fact, the three pushcart dogs you see here came with fries cost just over $10. 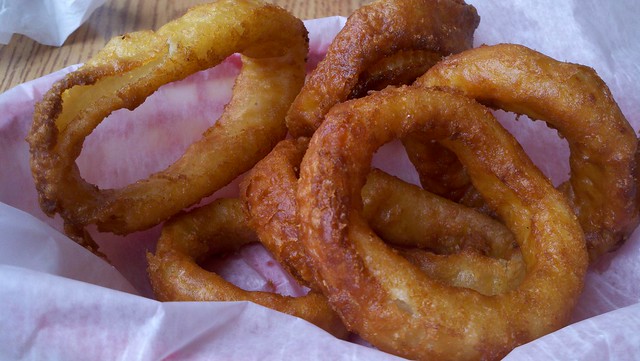 Jimmy Buff’s also has an array of sides. Their onion rings were sweet and greasy, and for fries you could get either regular style, waffle-cut, or sweet potato fries. They also serve chili, but I found that it tasted strongly of onions. I tend to frequent a lot of Mexican restaurants, so I had expected something lighter and with more spiciness. This was more like the chili you’d get at a ballpark, so if that’s your thing, have at it. 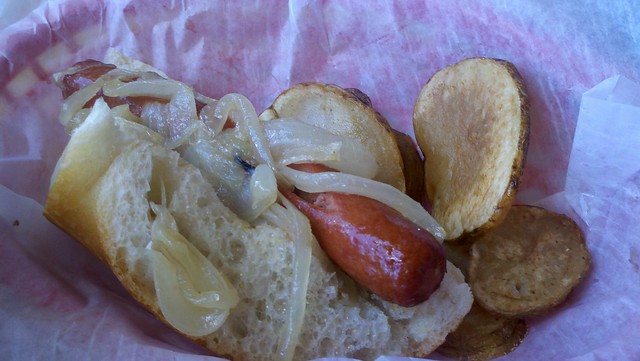 The Italian hot dog’s are a delicious beast. Let’s get this out of the way first: Italian hot dogs aren’t from Italy, they were first created right here in New Jersey. In fact, Jimmy ‘Buff’ Racioppi is credited as having invented the Italian Dog at the original Jimmy Buff’s in Newark in 1932. 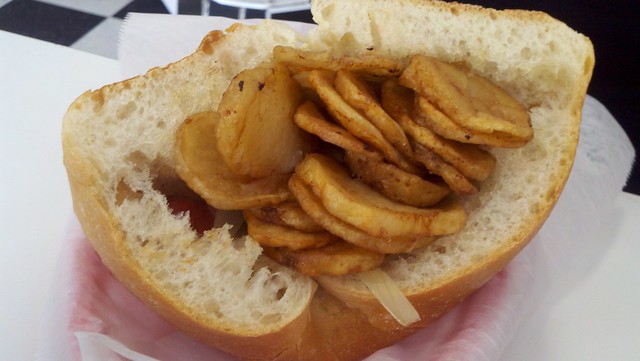 Yup, there are dogs in there. Rather than a dinky little frank on a conventional hot dog roll, the Italian Dogs are served in huge artisan rolls made from pizza dough. The rolls are cut in half and hollowed out, and then they get stuffed with 2 dogs, buried under fried slices of potatoes, and topped off with peppers and onions. Eating one is like having a whole plate of sausage and peppers all at once, with hot dog franks taking the place of the sausages, of course. 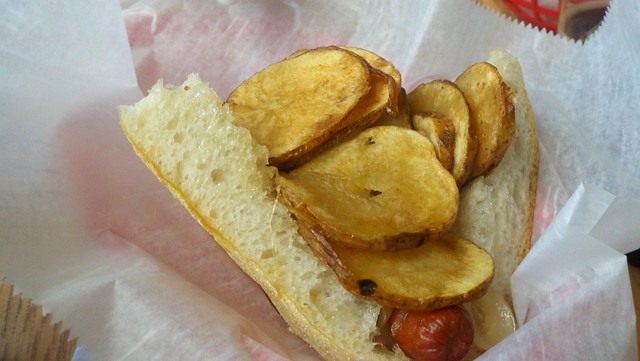 The fried potato chips on the dog are a fried food lover’s delight. They’re not overdone or too soggy, and are normally fried to the point that the sunlight shines through them. (I know I just put a smile on the face of a fried food lover out there!) 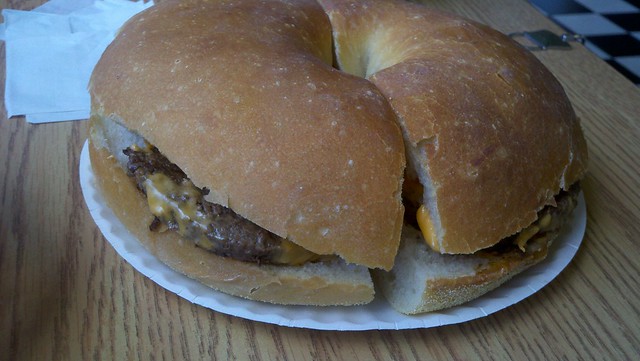 So lets talk about the big Burgers at Jimmy Buff’s! At the Randolph location, they offer burgers weighing in at 1/4 lb, 1/2 lb, 1 lb, and, the biggest burger I’ve had in quite a few years, the 2 lb Big Buff Burger! This monster had four 1/4lb patties on it that were thick and juicy, and the bun was equally thick (made from pizza dough?) While this burger may look like too much to tackle for one hungry customer, think about sharing it with your burger loving friend and get a whole Quarter Pounder on the cheap. 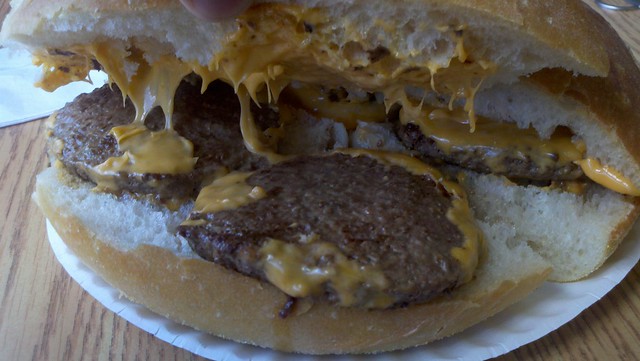 So for national burger month, why not have a huge burger from a New Jersey original? If you miss out on having burgers this month, you can always stop by on National Hot Dog day on July 23rd. Of course, no one’s going to stop you from enjoying it before then. 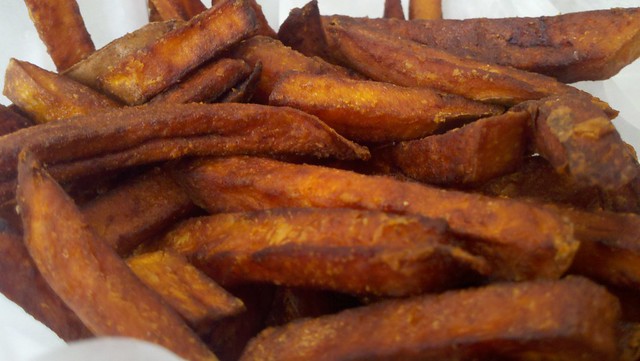 New Jersey Nick – If the Jersey Devil was 6’1″, overweight and bearded, his name would be Nick.  New Jersey Nick can not cook without the aid of a microwave, but, thanks to an iron stomach, he has learned about food by being a fearless and adventurous eater.  A self-proclaimed Burger Expert, Nick forgoes fancy restaurants to get a taste of all the ‘good food that’s bad for you’ from New Jersey’s Diners and Burger Joints.  When he’s not writing about food, Nick spends time on his other hobbies as an Xbox enthusiast, a Horror Movie Savant, a Nascar follower, a Comic Book Reader and a Pro-wrestling fan.  Just like Batman, Nick has a day job in the real world that isn’t as interesting as his alter ego.  You can read more about Nick’s adventures on his site at www.newjerseynick.com, follow @newjerseynick on Twitter  or ‘like’ him on Facebook.