When you think of dating someone, the first thing you think of isn’t normally what their food preferences happen to be. But, if you are a vegan it can be one of the things you consider. The American Vegan Society hosted a Valentines Dinner Buffet, at Caremes Restaurant which featured a book signing by Anne Dinshah,  daughter of Vegan Society president Freya Dinshah. Anne’s book called Dating Vegans:Recipes for Relationships talks about vegans socializing with non-vegans and how it can be a source of frustration or an opportunity for positive interaction and fun activities. 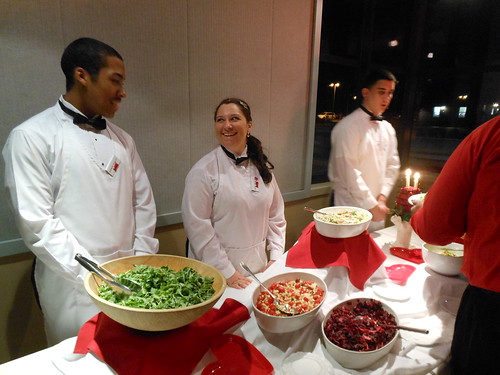 My two friends and their husbands joined us for the Vegan Valentine dinner buffet prepared and served by the culinary students under the supervision of their faculty; and while the women were excited about the night’s offerings, the men were a little apprehensive but willing. It was Valentine’s Day after all! The dining room was  abuzz with people and the music for romance was performed by Dylan Martello on acoustic guitar in the backround. Everyone was talking and laughing, it had a party atmosphere almost. The menu was extensive for the event, which impressed the men. The more food the better, bring it on. They thought they would never be filled up on veggies. We were served our first course which was Creamy  Squash Soup with roasted fennel and toasted pecans and packed a spicy hot kick, so far so good. The men were all pleased and said they would eat the soup again. Progress! Our table was called to the buffet, we pulled a  low number from a hat, good thing, our table was feisty. The buffet was pretty impressive and started with the appetizers. There was Hummus with Charred Whole Wheat Flatbread, Beet and Onion Salad with Mint,  Roasted Grape Tomatoes with Corn,Olive Oil and Basil, Arugula Salad with Spiced Pumkin Seeds and a Meyer Lemon Dressing, Fennel Salad with Avocado and Red Grapefruit, Quinoa Tabouli, and Sea Vegetable Salad with Dried Cranberries and Miso Dressing! Needless to say we tasted some of everything and it became very quiet at our table. After the appetizers came the mains, this time around the men were talking positive about what they were about eat. Grape Leaves Stuffed with Pine Nuts and Spiced Rice,  “Buttery” Garlic Potatoes with Green Beans and Caulflower, Pasta with Broccoli Rabe and White Beans, Millet with Red Beans and Kale, and Stuffed Portobello Mushrooms with Sweet Potato, Roasted Peppers, Dandelion Greens topped with Cashew Cream Sauce. Everything was scrumptious! The pasta and the mushrooms were a major hit with the table, leading the men to talk about how they could eat veggies if they were prepared like this at home. Progress folks!

Time for dessert! I was full and my friends were too. The men were even pretty full. Men are never totally full are they? But no one is ever too full for dessert. The dessert table was covered with delectable Lemon-Caramel and Kiwi Napoleons with Mango Sauce (my personal favorite), Shortcake with Winter Compote, Pine Nut Anise Cookies, and Pumpkin Cake with Chocolate Hazelnut Ganache and Cinnamon Coffee Sauce (the winner with the rest of the table). We sipped our tea and coffee and ate our desserts at a leisurely pace talking and laughing. It had turned out to be a wonderful Valentine’s Day in the company of good friends with delicious and lets not forget healthy fare. And not one man was hurt in the process. And who knows, maybe the men will eat all their veggies next time.