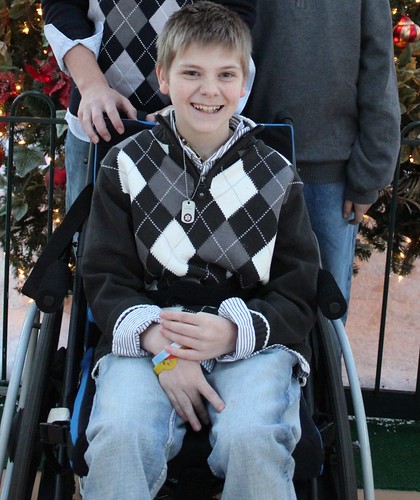 This year is no exception; the watering hole’s 38th Annual Longbeard Contest is helping the DiGregorio’s, a Princeton family whose middle son has a rare genetic disorder called ataxia telagiectasia (A-T). After the child’s diagnosis, family friends set up a fund called Derek’s Dream, to help the family with the expenses of caring for now 14-year-old Derek.

“I came up with the idea after going to a fundraiser to help a sick friend, and we started a committee, led by Steve, to plan an event. The idea was to raise money to help the DiGregorios deal with Derek’s illness,” said Howard Levy, Derek’s Dream’s co-founder. “We wanted them to be comfortable using the money for anything that they needed without any restrictions. Being who they are, the DiGregorios have also committed funds to help other A-T families and also for A-T research. “

A-T is a progressive, rare genetic disease that affects about 600 Americans. The disease attacks children. Both parents need to be carriers for the disease to strike. There is no treatment or cure for the disorder, said Steve DiGregorio, Derek’s father. “This disease compromises the kid’s immune system to the point they can’t be X-rayed and they are susceptible to cancer,” he said. “You have the worst of two worlds combined.” Many of the deaths related to the disease are caused by leukemia.

Derek, who uses an electric wheelchair to get around while out of his home, attends the local middle school as the disease is progressing and robbing him of his motor skills. Eventually, the family’s Princeton house will need to be modified for his needs.

The A&B’s Longbeard contest began in early February with men signing up to grow their facial hair until it is measured at the restaurant’s St. Patrick’s celebration on March 17.

Local officials, police and other local “celebrities” pitch in on Tuesdays between now and March 17th, guest bartenders will mix Celtic cocktails and take donations for a prize drawing for items they have donated to benefit Derek’s Dreams.

On March 17, St. Patrick’s Day, the fun begins with bagpipers kicking off an evening that includes high-stepping traditional dancers, Irish music, great food and drink and the annual Longbeard Contest.

A&B Chef/Owner Arthur Kukoda is planning a special Irish menu, including a Steamship Round of Corned Beef, sliced from a station on the enclosed patio. In the dining room, guests can choose from an array of specialties. Start with Dublin Shrimp, wrapped in Crispy Potatoes and served in a Horseradish Cream sauce.

The A&B is known for its outstanding selection of beers, and the brews will flow liberally with plenty of Guinness, and other Gaelic favorites. Fine wines are offered by the bottle or the glass. Irish Mist, Bailey’s Irish Cream and Jameson’s add to the list of Irish spirits.

The Alchemist & Barrister Restaurant and Pub
28 Witherspoon Street in the heart of downtown Princeton.