So, where do two Jersey guys of Italian descent and one Irish-German girl go for a bite to eat on a typical Friday afternoon?  Why Al Hilal Meat & Fish market in Paterson, of course. I guess when you invite yourself to lunch (yes, I did) with the Mayor of nearby Haledon Borough and the author of EthnicNJ.com, Anthony Ewing, you really need to be prepared for just about anything. 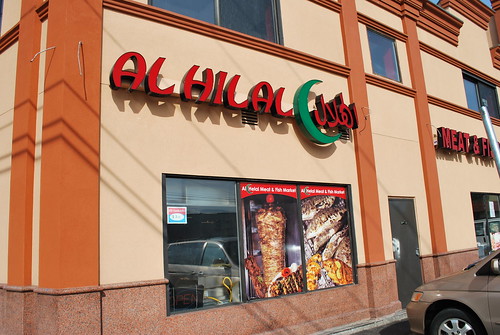 Mayor Domenick Stampone, was born and raised in and around Paterson (not counting his year in Italy in the third grade). Brought up surrounded by a vast selection of ethnic cuisine choices in Paterson, he is the quintessential Jersey Bites tour guide.  Our tour began on the street in front of Al Hilal as Stampone showed off the Paterson Farmer’s Market just a stone’s throw away from the front door of the restaurant. As we entered Al Hilal which is operated by Palestinian natives, Domenick explained to me that the term Halal refers to the religious dietary code that observant Muslims must follow in butchering, cleanliness, and in the absence of pork. To one side of the market was a very impressive selection of fresh fish. The selection was so impressive, I felt a bit intimidated and gravitated to more familiar waters, shrimp. I know, I’m a wimp. Mr. Mayor on the other hand, went for a beautiful Bronsino which he would escort to the cook to have grilled.

The fish monger handed me my catch of the day in a plastic bag and we made our way to the location of rising smoke. We met Anthony on the way who was coming from the Butcher counter with his choice of Lamb chop and Lamb sausage. 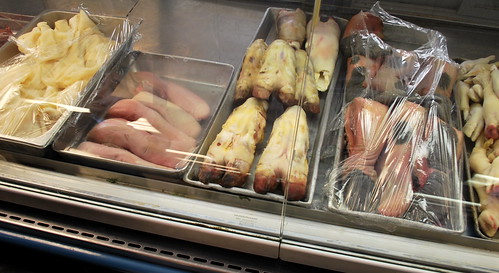 If the fish intimidated me, you can be sure this counter presented no temptations. We worked our way to the rising smoke and handed over the beginnings of our lunch. I asked to have the shrimp grilled on their charcoal grill. Anthony repeated those instructions for his meat platter and the Bronsino. While we waited for the food to cook, we perused the available side dishes which included grilled vegetables, rice, creamy hummus, sweet red pepper spread, and a Turkish salad. 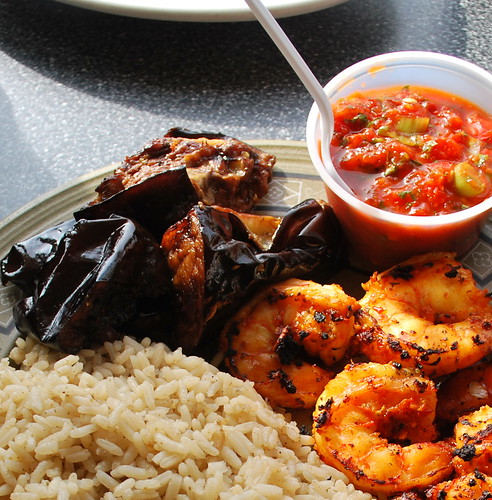 As you can see, the end result was a glorious mix of colors and tastes, much like the population of Paterson. We sat at the only seats in the house, a bar hugging the front window of the store and chatted about Paterson and Mayor Stampone’s political career, a career that began when he ran for the School Board at age 20 while he was still in College. It was fascinating to learn about the many nationalities that have come to settle in Paterson since the first German and Jewish immigrants arrived in the 1800’s. Paterson’s designation as the first planned industrialized city in the United States drew immigrants from all over the world with the promise of employment. Today, Paterson is home to Syrian and Lebanese immigrants, Puerto Rican, Dominican, Peruvian, Colombian, Mexican, Central American, and various South American natives and more.  It is the ultimate melting pot. 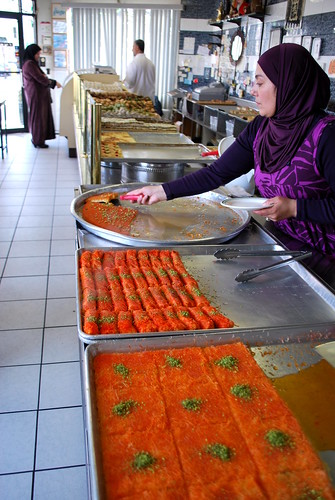 We left Al Hilal (it is spelled three different ways throughout the store) and headed for a “sweets” shop called Nablus Patries. The colors and textures were like nothing I had ever seen. Mayor Stampone explained that there are subtle differences in ingredients and naming of the various dishes from country to country.  We sampled a dessert known as kanafe.  It is the dessert she is cutting in the picture.   It was very sweet with a unique grainy texture similar to polenta as Anthony pointed out.

We finished our ethnic cuisine adventure with a trip to Taskin Bakery for some Turkish bread. I sampled the Börek also known as burek which is a baked or fried filled pastry made of a thin flaky dough and stuff with various ingredients. Today it was the spinach and cheese variety.

We said our goodbyes in the parking lot of the bakery. In just a few short hours, I had been exposed to the sights, smells and tastes of what might as well be another world to this Jersey Shore girl whose most exotic choices growing up were between Pizza and Chinese.  I was extremely grateful to my twitter friends @EthnicNJ and @DomStampone for the great company, conversation and culinary adventures.

So, what country are we visiting next fellas? 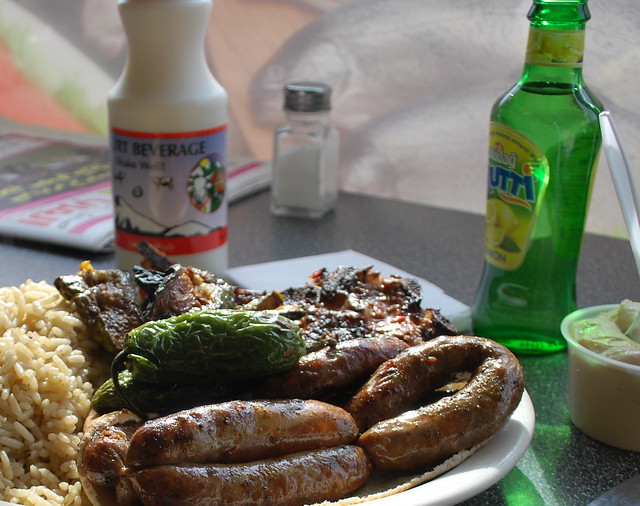 Deborah Smith , Founder and Executive Editor of JerseyBites.com.  Launched in 2007 as a home for her growing collection of recipes, Jersey Bites soon grew into a hub for all things edible in the Garden State. Deborah is also the owner of 3SquareDeals.com a Deals program that benefits Hunger Relief organizations in New Jersey. In her spare time, (Ha) she works as a Social Media consultant and speaker.  You can learn more about her services and marketing through social media on her blog www.DeborahLSmith.com