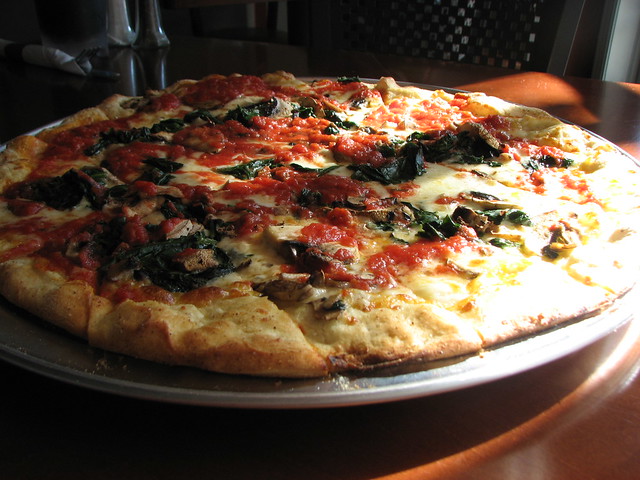 Deanna: You say tomato, I say … tomato! We may be from two different counties, but we speak the same language when it comes to food. A recent visit to Morristown’s new Tomato Pie found two Jersey Biters in delicious harmony over a Grandma Pie and a nice plate of rice balls.

Lauren: A NYTimes review of Tomato Pie in Morristown had my attention immediately. Thin crust pizza is my favorite, and I’ll find any excuse to return to Morris County. Growing up in Mendham, we didn’t have any good pizza nearby, but the families who live there now will love this place. I called up my fellow Jersey Bites Morris County Regional Editor, Deanna Quinones, who covers Morristown, to see if she had been to Tomato Pie yet. An email exchange evolved into lunch plans, and the “she said/she said” dual restaurant review was born.

Deanna: Sitting down with Union County Regional Editor, Lauren Weiss, to sample Tomato Pie’s menu offerings, I was delighted to find we were right in tune when it came to making selections. We opted for the house specialty Grandma Pie and a Tomato Pie with spinach and mushrooms. Then Lauren spied the rice balls on the appetizer menu and, for the sake of research, we gave the dish a green light.

Lauren: It was funny to dine out with another food blogger. Usually I’m the only one taking pictures and scribbling notes and quizzing the waiters and owners. We thought it would be fun to try telling the same story about the same lunch from two different perspectives, photos and all. 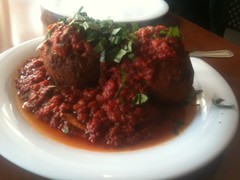 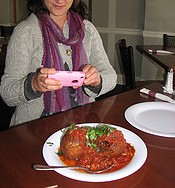 Deanna: The Rice Balls arrived first and I quickly learned to mind my fingers as Lauren, swooning over the outrageously good homemade tomato sauce, flashed her fork like a ninja with a sword for bite after bite of the stuff. Nestled under the steaming, chunky, salty-sweet marinara, the rice balls themselves were huge and perfectly browned. The crispy exterior gave way to tender, flavorful rice filling (with a what now? … is that a small hunk of sausage?) that launched a conversation about delicious rice balls we have known. Yum.

Lauren: My favorite food at Tomato Pie wasn’t even a pizza, it was the Arancini di Riso. About the size of navel oranges, these Rice Balls have a plain and somewhat grody-sounding name but there is nothing plain or gross about these beauties. The outside was crispy and the inside was creamy and savory with unexpected flecks of sausage. But the real treat was the tomato sauce that was delicately poured on top and around the plate, with basil chiffonade nesting above. The sauce took an exceptional appetizer and raised it to a whole new level of tomato explosion. I was even spreading it on the thin slices of Tomato Pie crust so it wouldn’t go to waste. It was all I could do not to lick the plate. Deanna and I are having our first meal out, so I figured I should behave. The sauce, by the way, is also used on entrees like chicken parmigiana and pastas. It was really special. 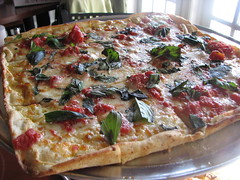 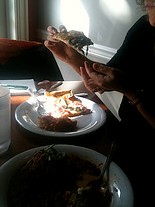 Deanna: The pizzas came next, on huge metal platters, stacked prettily on a table rack for our visual edification. The Grandma Pie lived up to its top billing: garlicky, cheesy, and fresh-tasting, it featured a sauce different from the heavenly gravy we’d already sampled. The manager explained that the Grandma’s sauce is made up of hand-crushed plum tomatoes, garlic, basil, and a little olive oil, and is layered over the mozzarella rather than under it as on a traditional pizza (hence the ‘tomato pie’ designation). It featured a thin crust and pleasing square shape, and was thoroughly delicious.

Lauren: The Grandma Pie really wowed us. I loved the garlicky sauce and the interesting square shape. It seemed Sicilian, but we were thrown off by the crispy thin crusty corners. Manager John Ausiello explains that in Sicily, pies are square and thin, and that the doughy thick crust Sicilian Pie is an American invention. He is proud of his irregular pies because that’s what sets him apart. That and some really good tomatoes whose identity he won’t divulge.

Deanna: The standard Tomato Pie paled in comparison. The crust was almost too thin and the oddly shaped rectangular slices didn’t quite suit the round pie format. It was a tasty pizza, but side-by-side with the Grandma Pie, it just wasn’t as much of a draw. 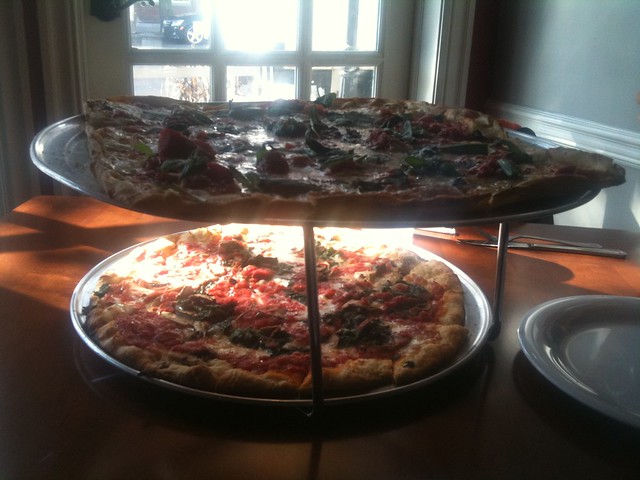 Lauren: The Tomato Pie came in a choice of small and large, with a variety of toppings. This eponymous special is not a traditional pizza. Actually it is, but not Jersey traditional (the round 8 slice variety). This Tomato Pie features a layer of cheese first, topped with hand crushed plum tomatoes, the Southern Italian way. We tried it with spinach and mushrooms and found it to be good, but not exactly special.

Deanna: One of the pizza specials of the day, a Caesar Salad Pie, appealed to neither of us as we agreed that dumping a salad onto a perfectly good pizza was unnecessary and really rather blasphemous.

Lauren: I asked the waiter what was his favorite pizza was and without skipping a beat he replied “Caesar Salad Pie.” Usually I like to order staff favorites, and he said it with such quick conviction, but I couldn’t bring myself to order it.  I’d rather get a pizza and/or a Caesar Salad, but don’t see why those two would be better when mixed. It seemed like too much, but if that’s your thing, it comes recommended by the waiter.

Deanna: Tomato Pie’s menu is short and to the point: pizza, a couple of salads, antipasto, fried calzones, and those killer rice balls. The desserts are limited to zeppoles (which I’ve never consumed outside of a street carnival setting … I wonder if they’re served in a greasy brown paper bag?) and a powdered sugar–dusted Nutella pie that looks decadent and inviting. Sadly, we were too full to order it on this visit but with a Grandma Pie this good in the neighborhood, I’ll definitely have another chance to give it a try.

Lauren: If I didn’t have to fly out the door to get back to Westfield in time for school pickup, I would have certainly stayed to try the Nutella Pie or some Zeppole and coffee. I’ll be back again, perhaps with my family or perhaps alone so I can have all the sauce to myself. If you see someone sneaking in with a mason jar, it might just be me. In fact, we had so much fun, we plan to review more pizza around Union County next.

Deanna Quinones is a freelance writer and blogger who is always ready to drop anything for a good bite, especially if it’s chocolate flavored. Contact her at deannaq@optimum.net.