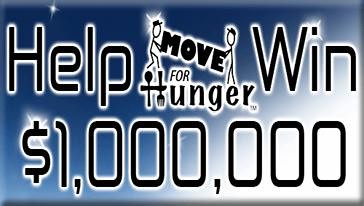 Move For Hunger of Neptune, NJ is nominated as one of just five finalists for the first ever American Giving Awards. Move for Hunger is a non-profit that works with moving companies to collect food for local food banks. By teaming up with moving companies across the country, Move For Hunger is creating one of the nation’s largest year-round service programs.  Their movers offer to pick up the unwanted, non-perishable food items from those who are moving and deliver it to their local food banks.

The nomination puts Move for Hunger in the running for a $1,000,000 grant. In a unique twist, The American Giving Awards allows Facebook fans of Chase Community Giving to choose which organizations receive funding. Voting for the awards runs from December 1 through December 8, 2011 and directly determines the size of the grant each charity will receive. Fans of Move For Hunger can vote for the charity by visiting facebook.com/ChaseCommunityGiving, and clicking the “American Giving Awards” link in the left side of the screen. (Click the “Vote” button under the “Move For Hunger” section.) Fans can vote once per day during the voting period.

“This is the biggest thing that has ever happened for Move For Hunger,” says Adam Lowy, executive director of Move For Hunger. “To receive national recognition on this scale is truly amazing for an organization as young as ours. The money will go a long way towards expanding our network of movers to reach our goal of delivering one million pounds a year to our nation’s food banks.” 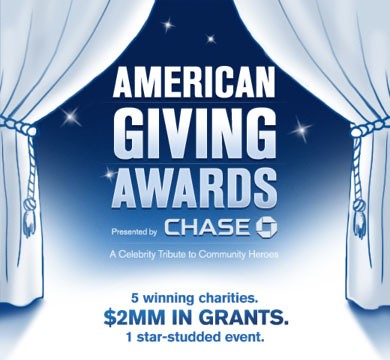 The organization’s close ties to the Jersey Shore community helped propel Move For Hunger into the final rounds. Move For Hunger received 18,000 votes on the American Giving Awards Facebook platform. They got a boost in their numbers when a local recording artist endorsed Move For Hunger on his Facebook page and website. (His name is Bruce Springsteen, maybe you’ve heard of him!) That move was recognized in national media outlets including OK! Magazine and fitperez.com; and also by this Springsteen-loving writer who first became aware of Move for Hunger on a facebook post mentioning that endorsement.

“A Celebrity Tribute to Community Heroes” the first ever American Giving Awards, presented by Chase, will air at 8:00 p.m. on December 10, 2011 on NBC and will be hosted by 22-time Emmy Award Winner Bob Costas. JPMorgan Chase and its Foundation have given more than $600 million to nonprofits over the past five years, focusing on community development, education, and arts and culture within high-need neighborhoods and communities across the globe.

Move For Hunger has been enjoying a very successful year having previously won a “Focus Global Drive” grant from Ford and being honored at the “DoSomething Awards” that aired on Vh1 in August. For more information or to find out how you can help support Move For Hunger, visit www.MoveForHunger.org and make an online donation to help our hunger relief efforts.

Kerry Brown loves casual meals from the grill and cocktails featuring fresh ingredients, especially when shared with family and friends in the backyard of her Medford, NJ home where she lives with her husband, two children, and a little gray cat named Tiki.