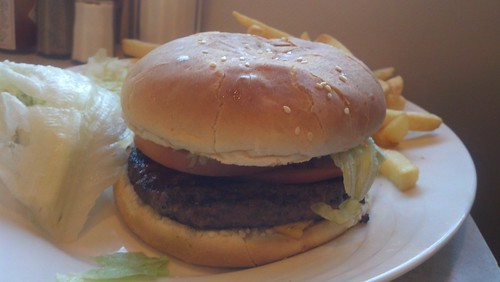 When you end up at a diner you don’t know, you never know what you’re gonna get. I know there’s a Yogi Berra’ism in there somewhere but the unknown can be a risky thing when it comes to diners. Lucky for you,  I’m a risk taker.  Sometimes, you get the greatest family owned place with a unique menu and a feel good atmosphere that leaves you full and smiling. Other times, you end up at a dingy truck stop, and you leave feeling, well, down right dingy. All in all, its a relief when you take a chance on a place and end up at a stand-up New Jersey Diner. Morristown Diner is a reliable classic. Its not particularly remarkable, but its certainly not a bad way to get your burger fix.

In case you haven’t heard of me before, my name is New Jersey Nick, and I’ve been scouring the Garden State looking for all the best Good Food That’s Bad For You. Burgers, Fries, Dogs, Burritos, and anything else that you need to jog off the next day. No fancy places for me. Just burger joints, diners and haunts favored by adventurous eaters and carnivores alike. I find the best places, and I hope you go give them a shot.

The Place – First off, the Diner is a very clean diner. Most of the fixtures are white, so you could definitely tell. Trust me, this is much appreciated by a guy who frequents diners as often as I do. The diner itself is located right on Morris St. I know there are a lot of people that work in Morristown, so its a good place to stop for lunch. There are several signs at the diner that say make a point that ‘parking across the street is forbidden!’ Well, I parked across the street near the Burger King and nobody towed my car or set it on fire, so I think you might be safe if you park there, too.

The Menu – is pretty standard diner fare with a variety of breakfast and dinner choices as well as the expected Greek dishes and pasta selections. Again, I don’t think this is a bad thing. Some restaurants are going to take chances with crazy dishes, and some just don’t have to. 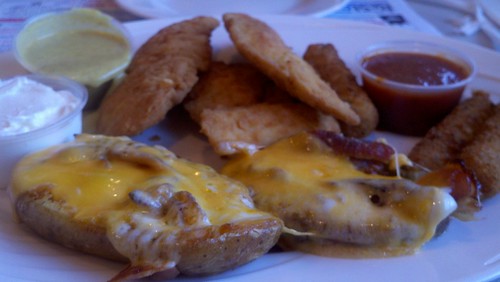 For an appetizer, I got the Mombo Combo. This came with potato skins, mozzarella sticks and chicken fingers. It met expectations, which, again, is a good thing. It was tasty and they made it really quick, which was cool. 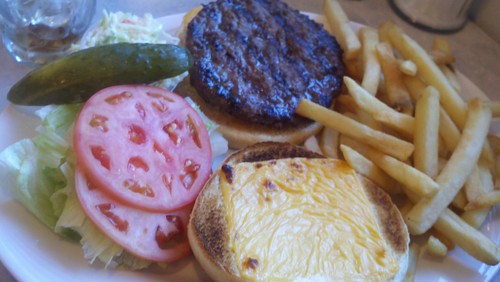 The Burger – There were a couple of choices for burgers on the menu, but I was advised by the waitress to stick with the Cheese Burger Deluxe. It was a classic burger: no frills, no craziness. It was good, even without “special meat” or unusual fixin’s you see lately at nearby burger restaurants. 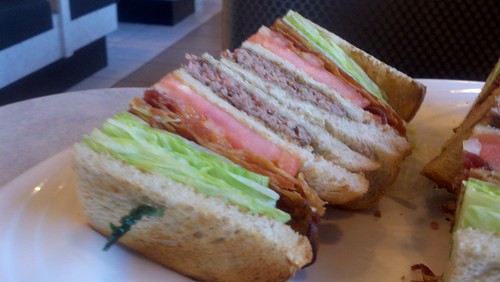 Burger Club Sandwich – I’m pretty sure you know that I love burgers, so I thought that this was pretty cool. The Burger Club is like a giant stacked BLT sandwich with a burger patty stuck into it. I can’t complain about that much great meat being shoved onto a sandwich. Its a mouthful for sure. I had to turn it sideways and break it in half just to take a bite. Pretty cool.

So, like I said, Morris Town Diner is a good reliable diner. Its got the dishes you expect and tasty burgers, too. There’s a lot of variety along the New Jersey foodscape, and you need to stop and appreciate the classic diners like this along the way. New Jersey Nick – If the Jersey Devil was 6’1″, overweight and bearded, his name would be Nick.  New Jersey Nick can not cook without the aid of a microwave, but, thanks to an iron stomach, he has learned about food by being a fearless and adventurous eater.  A self-proclaimed Burger Expert, Nick forgoes fancy restaurants to get a taste of all the ‘good food that’s bad for you’ from New Jersey’s Diners and Burger Joints.  When he’s not writing about food, Nick spends time on his other hobbies as an Xbox enthusiast, a Horror Movie Savant, a Nascar follower, a Comic Book Reader and a Pro-wrestling fan.  Just like Batman, Nick has a day job in the real world that isn’t as interesting as his alter ego.  You can read more about Nick’s adventures on his site at www.newjerseynick.com, follow@newjerseynick on Twitter  or ‘like’ him on Facebook.