I am by no means a wine expert, but I like to think that I drink enough of it to know a thing or two about it. People travel the world in search of great wines, crossing the globe and touching down in France, Italy, Spain, Australia, New Zealand, Chile,  Argentina, and here in the United States. But you don’t have to trek around the world or across the country to savor the perfect glass of wine.

The Garden State boasts over 40 vineyards that not only offer critically acclaimed wines, they also offer a total wine experience. Chances are pretty good that you can find a vineyard practically in your backyard or pretty close to it. You can imagine my excitement when I was lucky enough to discover that one such winery, Four JG’s Vineyard, exists in Colts Neck,  just miles from my home. 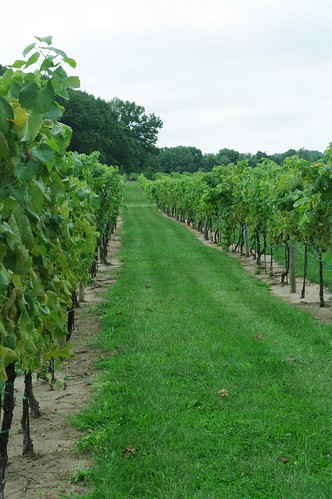 Four JG’s Winery is a family-owned and operated vineyard located on over 60 acres of prime farming land amidst bucolic horse farms. Founded in 1999, the winery is named after its owners, John and Janet Giunco and their children John (known to most as “Bert”) and Jill. With a focus on good farming practices and a careful selection of rootstock suitable for the soils of Monmouth County, Four JG’s produces award-winning wines that are bold in character and rich in fruit. All the wines are grown, produced, and bottled at their Colts Neck location. Four JG’s prides itself on being a family business with 3 generations participating in every aspect of the growing and producing of the wines.

I received a private walking tour of the vineyard and was impressed by the winemakers philosphy that only the best grapes grown on the farm go in to the bottle. With a careful adherence to the modern techniques of wine growing, the winemakers at Four JG’s closely monitor and maintain the crops to guarantee that the wine grapes are exposed to the best possible combination of handcrafting, sunlight, and water. With an abnormally high end-of-summer rain season this year, the excess water has been a challenge for Four JG’s winemakers. 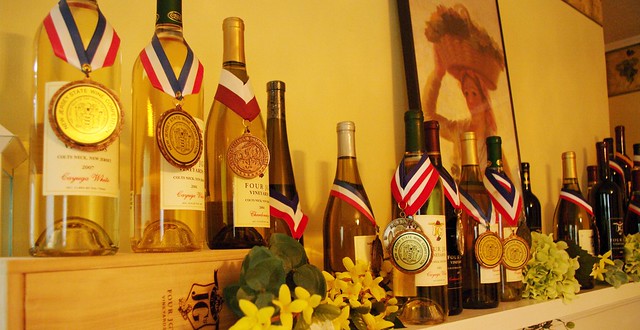 While at Four JG’s, I had the opportunity to sample some of their award-winning wines. I was not disappointed. I sampled the Cayuga White, a semi-dry, light and fruity wine. This wine is produced using the Cayuga grape, which is popular in the eastern United States primarily for its productivity and resistance to disease. I also tasted the Chambourcin, a rich wine with intense purple color and spicy, herbal flavors. It is produced using the Chambourcin grape, a late-rippening French grape that is suitable for Eastern growing seasons. Lastly, I sampled a favorite of visitors to Four JG’s, the Frappé Vino, a frozen wine prepared using Four JG’s Monmouth Blush varietal and a prepared Frappé Vino mix (available for purchase at Four JG’s). It’s simple to prepare. Combine the Monmouth Blush and the powdered mix. Stir well until the powdered mix completely dissolves. Freeze for 3 to 4 hours or until slush consistency is achieved. 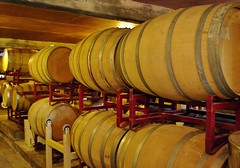 Four JG’s is open to the public throughout the year for special events. Consult their Web site for specific dates and times. Since fall is the harvesting season, Four JG’s has several events planned in the coming weeks. Wine can be purchased on site or from several retailers throughout the state. If you plan to purchase directly from the winery, call ahead for hours of operation as strict town ordinances in Colts Neck limit the hours during which the winery can sell to the public.

Sheila Hill was born and raised outside Hershey, Pennsylvania. Her love for all things chocolate began at an early age and continues to this day. While Sheila eventually left central Pennsylvania to attend college in suburban Philadelphia, her roots to PA Dutch food and chocolate run deep. After college, Sheila traveled extensively throughout Europe and the US as a software consultant. Her many travels afforded her opportunities to indulge in local cuisines and cultures. Eventually settling in the Garden State, Sheila took one bite of a Jersey tomato, and she was hooked. Now as the mother of two, Sheila enjoys sampling all of the Garden State’s delectable delights including everything from restaurants to locally grown fruits and veggies to locally produced wines. On rare occasion (after jumping through hoops of fire and bending over backwards), Sheila and her husband hit a favorite, romantic restaurant for a quiet dinner or a local hot-spot for a much-needed night out. Follow Sheila’s adventures in motherhood at her personal blogwww.piecesofamom.com and on Twitter @PiecesofaMom.