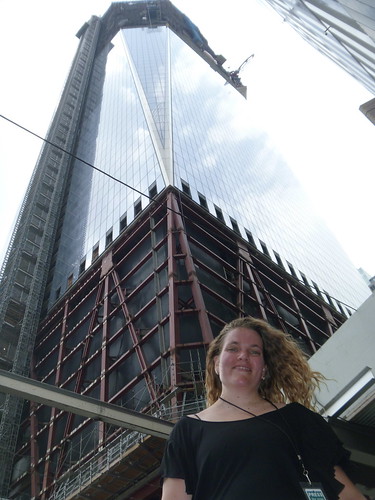 Originally published in the Princeton Packet on September 9, 2011

”If you are afraid of heights, now is the moment to get over it,” said Bill Baroni, deputy executive director of the Port Authority of New York and New Jersey, as he began our escorted tour of Ground Zero and the National 9/11 Memorial last month.

Okey-dokey. Fantastic. I’m terrified of heights to the point of paralyzation and not going on the Ferris wheel with my niece and nephew.

But, recognizing the opportunity that was being presented, I swallowed the tennis ball in my throat, put on a brave face and marched on, breaking out in a cold sweat as we soared skyward.

(Did I mention that this particular floor didn’t have walls yet, only the sheer netting covering the concrete floor?)

From the middle of the floor I peered out to a spectacular view as the wind whipped and drank in the moment as it unfolded, realizing very few will have this opportunity and it is a privilege journalism allows me.

Meanwhile, our photographer, Phil McAuliffe, was hanging over the scaffolding shooting pictures a mile a minute of the view, which included the Statue of Liberty and the sacred site below.

I envy those who will have an office with that view.

Then, as we round the floor talking about the funding of the project, white paint markers come out. They are handed to us and we get to be a part of history and sign one of the steel beams on the 70th floor.

Now we board an elevator on the outside of the building to begin our descent back to the scarred earth below. 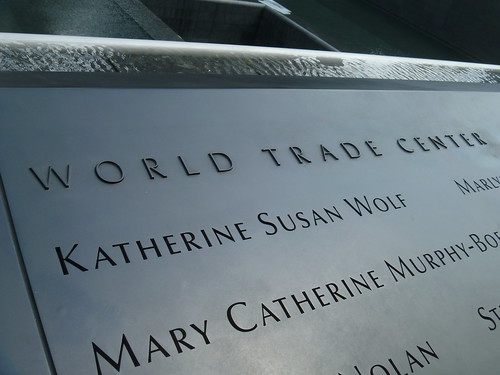 The next stop was the two reflecting pools and the bronze planks with the names of all the victims engraved into them. What really stands out to me, besides the size and the amount of names, is the care given to the construction of this section of the memorial.

Underneath the bronze sections are pipes that will run glycol to maintain the temperature of the metal so it can be touched at any time. Without this technology, people visiting in the winter and summer run the risk of burns from the extreme temperatures the metal can reach during the year.

The names are also lit from behind, so they are visible 24 hours a day. There is a directory onsite for the location of individual names.

Where was I on that fateful day? I was working at a daily newspaper in central New Jersey in the photo department. I remember sitting on the floor at my in-laws watching the news in disbelief. When I was finally able to get a line into the newsroom, the response was “get here now.” I remember sitting and watching the photos come in all day long on the news wires. As horrific as they were, we were unable to look away.

My visit last month was the first time I had been to the site itself. I’d seen it from another building and looked down, but never this close.

As we walked through site, one unexpected sensation that struck me is the feeling of peace that settles upon you as you take in all that is going on. It’s hard to explain and I don’t know exactly why it happened, but it did.

Going into this assignment, I was very nervous, shaken and unsure. How does one explain Ground Zero and begin to even tackle the subject of 9/11? For me the story is about respecting what has happened here and admiring the courage it takes to move forward.

In the below-ground museum that is being built there is a great metaphor as one enters. Visitors will be able to see the slurry walls built under the original tower to keep the river at bay. Adjacent to the old walls are the new ones built to reinforce the older walls. It almost seems like a new generation is shouldering the burden and lifting the older to begin anew as the World Trade Center is reborn to honor the past.