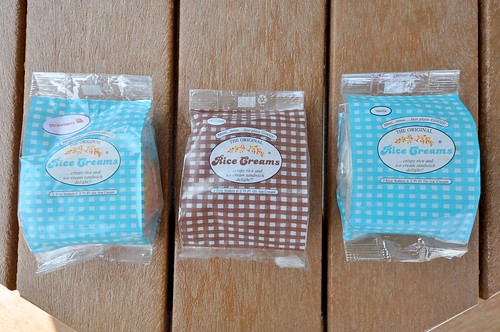 Creator Drew Christoffel said his mother made these treats as an after school snack for him and his brother in the 80’s. Combining rich ice cream with crispy rice cereal treats, she practically had a production line in her kitchen when word got out in the neighborhood. When Drew was looking to strike out as an entrepreneur, he turned to these creative summer treats, gave them a name and Rice Creams were officially born. 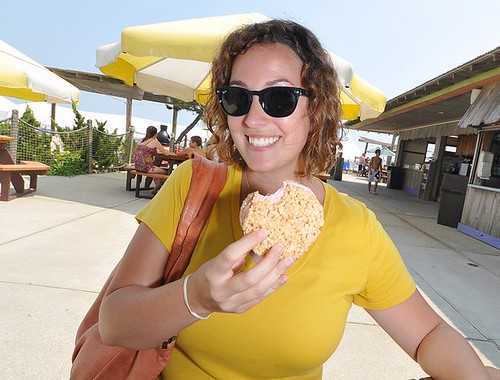 “The marshmallow and crisped rice wafer is the most time consuming part of the process,” said Drew. “We lay the sheets out like large pizza pies and cut them into circles with specialized cutters. The ice cream is then extruded onto a wafer, another top wafer is added, then off to a blast freezer it goes. They’re then packaged and placed into a deep freezer.”

There’s truly nothing like these ice cream sandwiches. I sampled strawberry and chocolate Rice Creams last week on a blazing hot day. The rice cereal and marshmallow treats make the perfect sandwich material for ice cream. They’re light, crisp and refreshing- the perfect snack to enjoy when you want to cool off. You can find them at amusement parks and ball parks throughout New Jersey (click here for a full list of vendors), with more venues to carry them in 2012.

“We’ve dubbed ourselves “New Jersey’s official ice cream sandwich,'” said Drew. “Although we’ve received no formal documentation from Trenton, I’m sure Governor Christie wouldn’t have any qualms about it!”

Alison Heller is the Jersey Bites Cape May County Regional Editor. She also writes for Examiner.com andTrendHunter.com. She grew up on the beach in Wildwood Crest and currently works in advertising. After earning her Master of Fine Arts in English and Creative Writing in New York City (a place that was essentially Food Rehab), she stopped putting ketchup on everything and started experimenting with flavors. She loves sushi and cupcakes, sushi that looks like cupcakes, but never cupcakes that look like sushi. www.superalzy.com