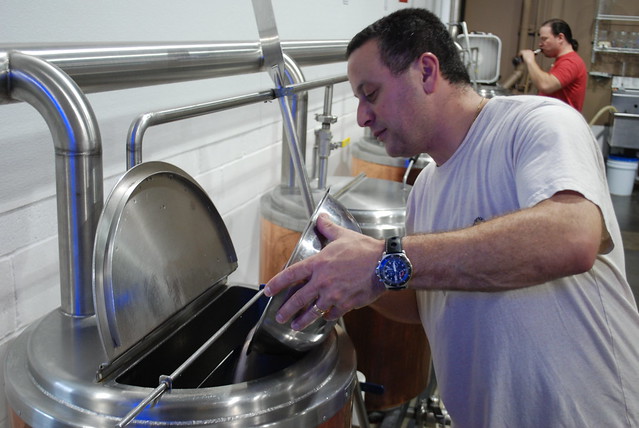 I have so many interests outside of my day job that I just don’t need another hobby. Sure, I’d love to brew beer at home and even if I did have the time, the kitchen is Debbie’s domain and there’s just nowhere else. There’s more than a few of us facing a similar conundrum.

When my buddy Steve (pictured above) invited another friend, Juan, and I to share a brew kettle at The Brewers Apprentice, it was a no brainer. I’ve brewed there before, but not in their new location. Although the new place is more than double the size of their old location, they still have the same six brew kettles. According to their manager, Ron, they needed the extra space for the brewing supply side of the business. In fact, after less than a year there, they are running out of space again! A review of their inventory would be an article of itself, so let me just stick to the experience here.

You’ll have to schedule your brew date ahead of time and someone in your party will have to have a brewers license. No worries if you don’t. The Brewers Apprentice will give you the paperwork and file it for you. It will cost $15 and is good for a year. Now that the paper work is done, it’s time to have some fun. If you haven’t already done so on line ahead of time, the first thing you’ll do is peruse the recipe book and pick one out. A word about the recipes; they are produced by the staff and “proven” by them as well. In fact, they were working on a test batch of an experimental ESB recipe while we where there.

Since we had never brewed a Belgian Style beer, we chose Devil Brew (styled after Duvel). The Brewers Apprentice is basically a well appointed warehouse and despite its yawning size, it’s pretty well organized (it’s also not air conditioned so dress appropriately!). Our first order of business was to gather our ingredients which was easily done. Once our grains were ground up and added to the kettle to steep, we had 30 minutes to kill. That’s actually the nice part about the brewing process. There’s down time to talk to other brewers, kibitz with the staff or wander over to the bottling section to get a taste of someone else’s finished product. If you brought some food and drink (yup, you can bring some beer if you want) there’s time for that too. 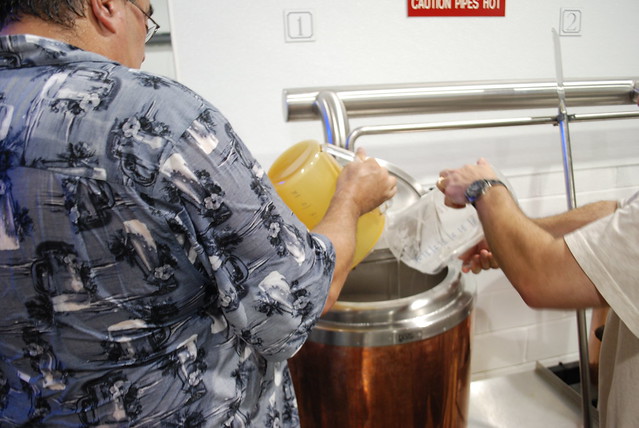 After adding extracts, hops/spices (and in our case, Candi sugar) the kettle is brought to a rolling boil for the bittering hops. In 30 more minutes, you’re done. The whole process takes a couple of hours. Basically, you’ve prepared the wort (un-fermented beer). The staff will drain your kettle, add the yeast and store it for two or three weeks while the yeast and sugar do their thing. When they’re done, it’s time to come back and bottle all 72 of your 22oz.bomber bottles of fresh beer! The bottling process is a bit assembly-line like, but with three of us it didn’t take too long. Now, it was our turn to provide samples for other curious customers. We got rave reviews. There was a strong wheat beer character to our brew, but the Belgian yeast made its presence known with definite banana and clove notes. With a couple of more weeks aging in the bottle, the character will develop even more. 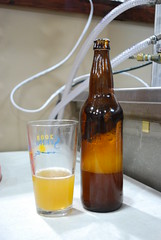 The cost works out to about $3 per 22 oz. bottle which is much less than the average retail cost per bomber (a little more if you have to buy bottles on your first visit), but you will have had a lot more fun. If you are a newbie at brewing, the Brewers Apprentice offers a great way to get your feet wet with guaranteed results. Experienced home brewers might want to get out of the garage, brew in a more social atmosphere and let someone else do the clean up!

Beware though. There is an undeniable allure to the wholesome, bready smell of new beer in the kettle and to the satisfaction of saying, “I made this”. Try it once and there’s a good chance you’ll be back!