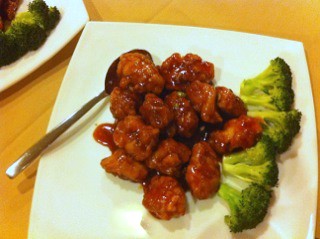 On a recent Friday night, we met 6 of our friends for a family style meal at Hong Kong Fusion in Cherry Hill. We thought it would be a fun place for a group outing-if you order a little of this and a little of that, you can work your way through different parts of the menu pretty easily. I learned that share-sies are the way to go when I worked near Chinatown in New York City. I was blessed to have a colleague whose family owned a Chinese restaurant. She knew the best places to go and the best things to order, so we always dined family style and let her pick the food. Hong Kong Fusion has gotten some press in our area for their Shanghai Dumplings, so we decided that we had to share some.  Served as an appetizer on a small plate with dipping sauce, these pork or crabmeat filled dumplings are delicious and fun to eat, and the best part is that you get to slurp them!  We were instructed to place the dumpling on a curved white spoon after dipping it in sauce and then slurp away. We were a noisy little group, but we loved those plump pillows of goodness! They were sturdy enough to hold their filling without falling apart, yet lacked that heaviness that haunts other dumpling dishes. We also tried the Boneless Ribs Hong Kong Style. These were little strips of boneless pork that had a sweet and smoky bacon flavor-pure porcine heaven! 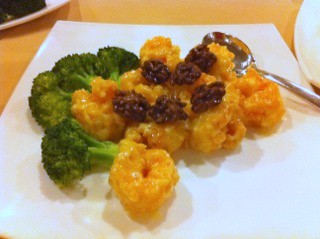 We decided to share several entrees. I selected the Jumbo Shrimp With Honey Walnuts, which were lightly fried and were served with a marvelous mango mayo. We also tried the Garlic Shrimp, the Sesame Crusted Tuna and the Oven-Crisped Soft Shell Crab (can you sense a seafood theme going on here?). All of these dishes were excellent. I have always been a wimp when it comes to trying soft-shelled crab (yeah, I know that I should be flogged for saying this when I live in the Middle Atlantic region a/k/a soft shell capital of the world). I decided to be brave and try Hong King Fusion’s version. The crabs were pounded flat and were lightly crisped. I need not have been fearful-they were great!

There were also a couple of other dishes that we wanted to try. We decided that we needed to balance out the menu with a few non-seafood dishes, so we ordered the Chicken and Broccoli (which disappeared quickly!) and the Garlic Eggplant. Eggplant also falls into one of my “food phobia” categories (thankfully, my list is small). However, everyone was raving about how good the eggplant was, so I decided to summon up my courage and try it. I was glad that I did. The eggplant was positively ethereal-silky smooth, with much superb garlic flavor.

Hong Kong Fusion also serves desserts, including a dish known as Chocolate Lovin’ Spoonful and a house-made Raspberry Sorbet. Since I had baked up a dessert to share back at our house, we passed on a final dessert course. However, we were served cute little chocolate and vanilla fortune cookies before heading home.

In addition to having great food, Hong Kong Fusion has incredibly warm and gracious service. Our group felt very welcome there. If you don’t have time to dine in, they do take-out, too.
Hong Kong Fusion is located at 1998 Route 70 East in Cherry Hill 856-751-3888
http://hkfrestaurant.com/