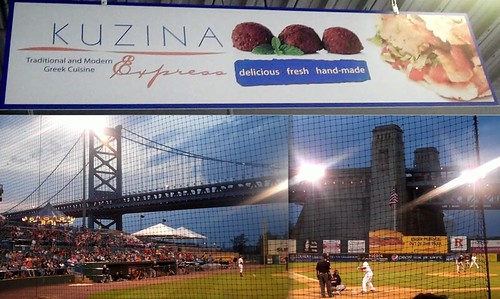 The Riversharks took their first win of the 2011 season on Tuesday night in a victory over the Long Island Ducks. Two home runs by the home team weren’t the only big plays at the home opener as Kuzina Express hit one out of the park in the concession’s debut. While a smaller ballpark, Campbell’s Field has a certain majestic quality that reveals itself after you climb the stairs to the main concourse and the landing opens to the bright green diamond and massive Ben Franklin Bridge backdrop. Walking down the right side of the concessions–past the Bud Light Dugout where the sponsor drink is $1 on Tuesdays–you’ll find the franchise’s newest addition.

The stadium’s outpost of Cherry Hill’s Kuzina by Sophia introduces an elevated level of cuisine to the Riversharks’ offerings. The menu focuses on what Assad Khoury, co-owner of the restaurant with wife and chef Sofia Karakasidou Khoury, referred to as Greek street food–gyros, falafel, a cheese-filled sesame bread stick called koulouri that I will have to return to sample, and spanakopita among other choices. Assad walked me through my Kuzina Express experience explaining their process for creating chicken gyros with such full flavor and tenderness it is amazing they refrain from being greasy. The secret is in the layering of white and dark meat.

I also had the opportunity to try the spanakopita with layers of buttery filo wrapped around a thick spinach center, the traditional beef and lamb gyro with tangy tzatziki sauce, and iced coffee with homemade baklava. To be honest, I had to wait until I got home to dig into dessert partly because it is a bit difficult to eat in the stands but also because I just didn’t have any more room! While prices are standard at $5-$7.50, the portions are bigger than most park menu items and are a substantial enough dinner to break from the hot dogs and french fries.

The partnership was a natural pairing for the restaurant with Sophia’s culinary vision and Assad’s catering experience and knack for networking. “It’s always been in the back of my mind. I do a lot of networking and at one of these South Jersey chambers’ luncheons Drew Nelson (Riversharks Corporate Partnerships Manager) was at my table,” Assad explained. “He said we have this opportunity and that’s how it started.”

Assad expressed the couple’s excitement at the new venture and hope that Kuzina Express at Campbell’s Field is the first of future outposts, including possibilities across the river.

For schedule and park times: www.riversharks.com