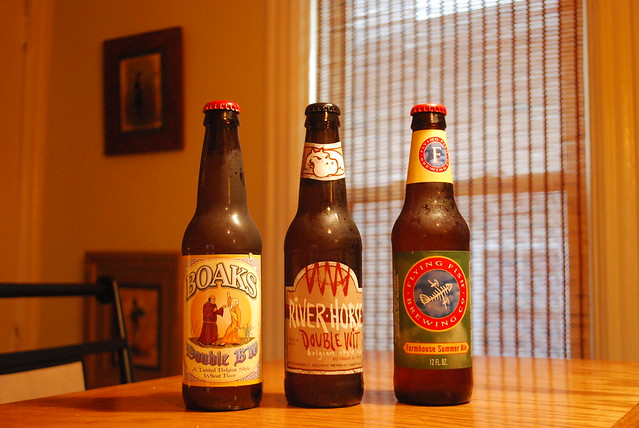 As Spring still struggles to free itself from Winter’s icy grip, New Jersey’s brewers have been hard at work producing offerings for milder temperatures. In fact, some Spring beers have already come and gone with Summer selections starting to trickle in. For instance, I really wanted to try Ramstein’s Maibock, but I couldn’t find it locally. I’ve heard good things about it so grab some if you can find it. So, without further ado, here’s what I did find locally… 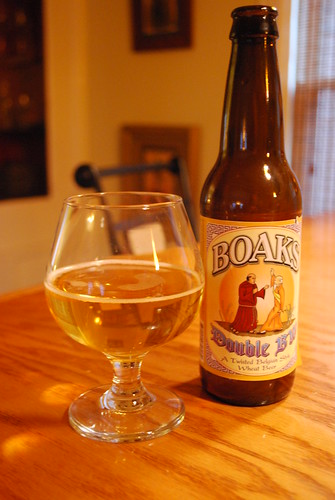 First up is Boak’s Double BW. Billed as a “twisted Belgian style wheat beer” I figured this was a good choice for celebrating the end of winter. It pours out clear and light golden yellow in color. Promising. A quick sniff reveals the Belgian yeast with a tart banana scent. There’s a definite citrus character and maybe some green apple. Next comes a little ginger spice and the wheat rounds it out in nice dry finish. This is a subtle beer, so think mild seafood and salads.

The next beer to gallop up is River Horse’s Double Wit. Brewers love to double up everything these days, so it was only a matter of time until someone got around to a Wit. It’s deeper amber color is evidence of the double billing. This is a pretty complex beer. I got a cotton candy sweetness in the nose, but you may get something else entirely. It was surprisingly spicy and tart up front with a boozy sweetness following. The finish was definitely dry though. I told you it is complex! Go ahead and pair this beer with more full flavored foods. It’s robust and versatile. 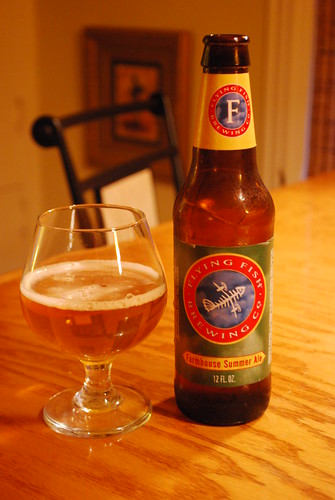 The final beer to surface is Flying Fish Farmhouse Summer Ale. Ok, I know it has the word “summer” in the name, but when I think “farmhouse ale” I think of Spring. That said, my tasting tells me that this one might be better left until it’s 80 degrees and sunny. It pours a shade lighter than the Wit, but the nose is far more neutral. There is some faint tropical fruit flavor that gives way to tart peach. It has a thin mouthfeel and is very subtle so it takes a while for the flavor to come through. A great refresher after mowing the lawn and should be paired with milder foods.

That’s it for my tasting. What have you found? Just about every brew pub in the state has some form of Spring seasonal, so drop me a line and let us know what you liked.

After my tasting, the first beer I reached for was the Riverhorse Double Wit. Dinner was ready and I knew it would go great with whatever was coming out of Debbie’s kitchen!

Peter Culos is the editor of “Beer Bites,” our monthly feature about breweries, bars and good beer in the garden state.  A graphic designer by day, and a life long New Jersey resident,  Peter was first introduced to the novel idea that beer could actually have flavor during several visits to the UK.  He’s been riding the craft beer bus ever since.  It has been called the ultimate social lubricant and Peter’s philosophy on beer is, “I’d rather split my last good beer with a friend than drink the whole thing by myself.”  Besides beer he also likes history, dogs, Jeeps and painting.  In the past, he has written a History and Art blog for the Weider History Group and occasionally contributes to his own blog, history-geek.com.  Life is short.  Drink good beer.