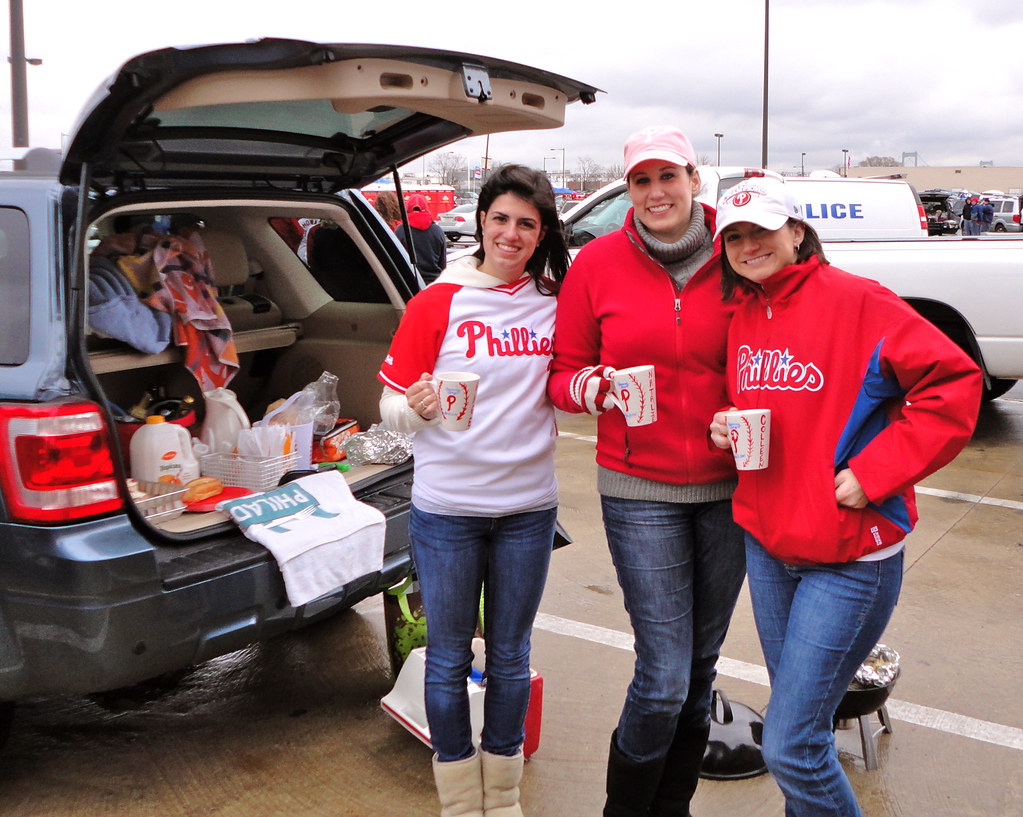 Unless you’re a patron of the minor league teams, if you want to enjoy a nice day out at the ball game you will have to leave New Jersey. I take every trip over to Philly to route for my beloved team as an opportunity to show Jersey pride with our impeccable choice in cookout foods and, I hope, hospitality. An opening day first-timer, I was determined to make the event special even if Mother Nature was putting a damper on the weather. Nothing has a sunnier connotation to me than brunch and with a 1:05pm scheduled first-pitch it was a no-brainer to switch up the old tailgating menu. Armed with new shelter supplies–canopy, rain panels, and weights to keep our make-shift kitchen from blowing down Pattison Avenue—and easy to assemble dishes we were ready to play (or at least watch) ball in no time.

The trick to brunch tailgating is pre-cooking everything and just using the grill to heat things up.  Aluminum foil is your best friend. I scrambled up a large batch of eggs, baked off veggie sausage in the oven (the first time abstaining from meat on Fridays really felt like a sacrifice, but these are also a healthy alternative to Italian sausage), fried up some peppers and onions, and then packed each component separately in foil.  When you get to the game turn on the grill, warm the food packets, and then assemble your own breakfast sandwich on a soft Amorosa roll, if you’re at Citizen’s Bank Park of course.

To round out our brunch we had assorted fruit and dip (equal parts whipped cream cheese to marshmallow fluff), Mimosas (save room in your cooler and let your OJ do double-duty as an ice pack by freezing orange concentrate with a little cream in shallow, tin takeaway pans to scoop out as needed), Bloody Marys (pour out a small glass of V8 for yourself then add the vodka and spices of choice to the now roomy bottle, shake, and cap to travel), and my favorite—cinnamon buns.

In a pinch or moment of hysterical craving, the refrigerated buns will do, but I think the extra effort is absolutely worth it when it comes to baking. The recipe below is adapted from a coffee cake in my mom’s 1978 UNC-Greensboro Cook Book. The rolls are relatively easy to make and result in pleasantly yeasty dough. Our tailgating neighbors agreed. 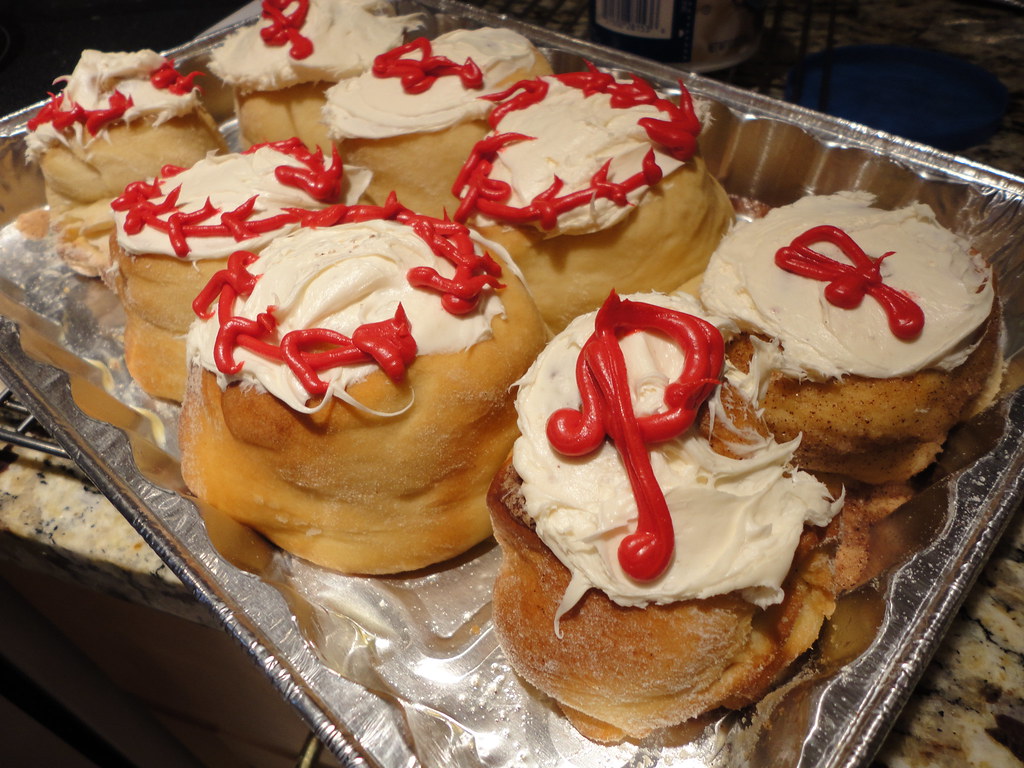 In large mixing bowl, combine 1 ½ cups of flour, ½ cup sugar, salt, and dry yeast. In saucepan, heat milk and 1/3 cup butter until milk is warm (butter does not need to melt). Add eggs and warm milk to flour mixture. Blend until moistened, then beat 3 minutes. By hand, stir in remaining flour to form stiff dough. Knead on floured surface until smooth and elastic, 2 to 3 minutes. Place in greased bowl, turning to coat. Cover, let rise in warm place until light and doubled in size, about 1 hour.

Punch down dough; divide in half. Roll our each half on floured surface to a 15 x 10 inch rectangle. Spread each with butter; sprinkle with mixture of remaining sugar and cinnamon. Roll up each, turning along 15 inch side. Cut each into 8 rolls. Place within 1 inch of each other on a baking sheet and press down a bit to round out. Cover; let rise in warm place until light and doubled in size, about 1 hour. Bake at 350 degrees F, for 18 to 20 minutes until golden brown. Cool slightly if icing.

A tailgate can be made special with a homemade dish and a few cute team touches, but don’t be a hero. Pick your thing and then concentrate on having a good time. No one balked at the canned cream cheese icing. They were too busy fawning over the decorated tops and actually eating them! cheap yankees tickets

With a come from behind win in the ninth inning, the day proved to be a memorable experience and could quite possibly turn into a baseball tradition. I’m excited for the season and already have some new themed tailgate dishes on deck for the next game!