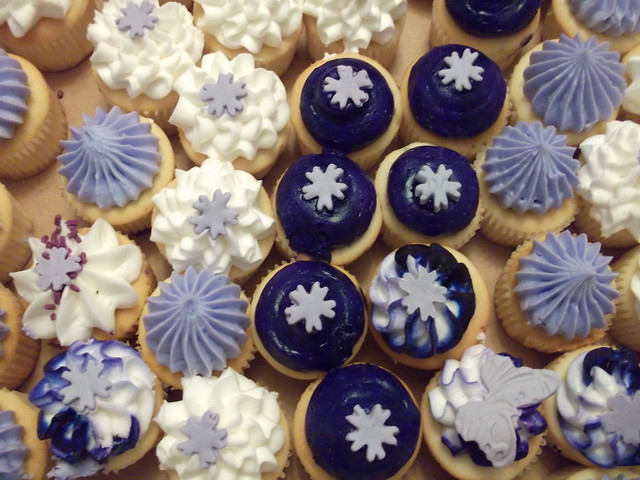 Purple was the color of the day on March 13th at “Cupcakes with Buddy”, a charity event where cake-designer Buddy Valastro of Carlo’s Bake Shop, (a.k.a. “The Cake Boss”) teamed up with The Anita Kaufmann Foundation (AKF) to support epilepsy awareness and upcoming “Purple Day” on March 26th (more to come on that).

Purple, the international color for epilepsy, affects over 3 million Americans, with 1 out of 10 people experiencing a seizure in their lifetime. Since 2006, Debra Josephs and the Foundation have educated over 30,000 children in the tri-state area about epilepsy and seizures through its fifth grade “Thinking about Epilepsy” program.

Attendees sampled cupcakes as they bid on incredible prizes in a silent auction.  Coffee was generously provided by Starbucks and milk by Ronnybrook Farm Dairy.  And the Pièce de résistance was the unveiling of Buddy’s special cake for the event along with a cupcake design demonstration.

Speeches were made by families about their personal experiences with epilepsy as a parent, brother, uncle (Buddy), and child. The most emotional and moving by far, came from Buddy’s niece, Bartolina, who is both now seizure and medication free.  All who attended walked away with a far better understanding of those who live with epilepsy which of course is part of AKF’s mission.  ALL proceeds from the event went toward the education programs, materials, and seizure first aid trainings organized by AKF and also offered free-of-charge to the public.

So, here’s how you (if you own a bakery) can get involved with Purple Day. During the week of March 26th, AKF is inviting bakeries and cupcakeries across the United States to feature PURPLE CUPCAKES in an effort to promote awareness of a condition that affects over 3 million Americans.

AKF will provide you with the Purple Day swag and signage and you make the cupcakes. All they ask is that a portion of cupcake sales go back to Purple Day for epilepsy awareness (10% is suggested). In return, your shop and website will be listed on a dedicated page at both www.purpleday.org and www.akfus.org. They will also provide you with press materials to send out to the local media.

We (Jersey Bites) will also post pictures of your event on our Facebook page, so don’t forget the camera.

Now, if you don’t own a bakery, you know what your assignment is. Buy purple cupcakes on March 26th. It’s a tough job, but we think you can handle it.

Beverly A. Beveridge is our Monmouth County Regional Editor.  Bev resides in Eatontown with her husband, Bob, daughters, Melissa and Brittany, son, Glenn, dog, Bailey and cats, Kitty and Slodki (polish for honey/sweet). Beverly’s ‘culinary curiosity’ was sparked by her brother who is a chef in Paris and author of many cookbooks. She enjoys dining out, piano, tennis, traveling, designing her JERSEY GIRL swimsuits and Calendar, music (especially Rock Concerts) and meeting new people. Enjoy her ‘fun’ reviews!  Passport to Peru – Home of the Jersey Girls Swimsuit models and ‘Calendar’ Girls!  ‘Passport Swimsuits – A Swimsuit to fit ‘every body’.  jerseybeveridge@gmail.com