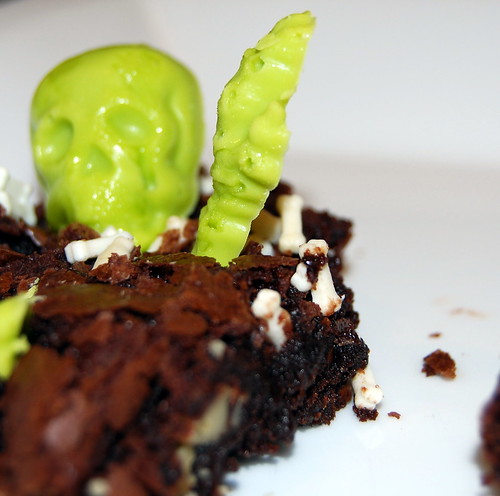 While scouring the supermarket for spooky cupcake liners, I found little bone shaped sprinkles which inspired this incredible brownie recipe that carries both a trick and a treat!

# handful of chopped walnuts or pecans

Place rack in the center of the oven and preheat to 350. Spray an 11×7 baking dish with non-stick spray.

In a medium bowl, whisk together flour, salt, cayenne, cinnamon and cocoa. Set aside.

Stir in dry mixture until moistened. Fold in a handful of chocolate chips and nuts (or substitute any ingredients you like here to kick up the “trick” element. Bacon works or raisins, anything to get a bone-crunching texture or a worm-chewy bite!).

Pour mixture into pan and bake for 30 minutes to produce the fudgiest treat with a tricky little kick.

While still warm, sprinkle bone sprinkles on top and then let cool completely.

For the green skeletons, Michael’s Art Supply sells tons of colored candy melts and molds. Using a skeleton mold and creepy green candy melts, I created zombie parts to top the boneyard. Simply melt the candy in a double boiler, pour into the molds and let set in the fridge. Apply to cooled brownies. 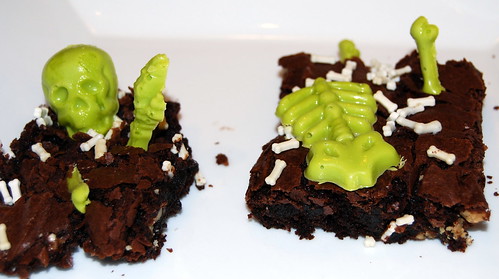